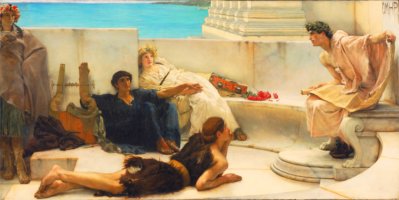 The name humanities has “human” as its basis. The humanities are about us. In a way, the humanities are the study of what it means to be human along with the fruits of human genius and the creative spirit. The humanities ranges from philosophy—that most sublime and supreme queen—to literature, art, music, religion, language, and all the disciplines and topics that inform, build, and constitute what people have long called “culture.” Humanist studies is not, however, an outright celebration of every aspect of the human spirit and endeavor. It can be just as critical as it is appraising. Its study can inform and instruct—pointing out errors, as much as pointing out goodness, virtue, beauty, and other such things to strive for.

Everyone knows the first critique of the humanities: that it is not a viable or well-thought out investment—a waste of money to study such dull and dry topics when one should invest in an education “to get a job.” And we all know what that really means: becoming a cog in the increasingly digitized and mechanistic economistic way of life. This mentality of obscene economism is itself rooted in the humanities. One need only look to English philosophers like Francis Bacon, Thomas Hobbes, and John Locke to see this conception of the human as a body of matter in motion with the goal of consumerism as the highest good in life, precisely because Hobbes and Locke denied the summom bonum in their works. For those interested in the genealogies of specific worldviews and outlooks on the eternal question quid sit homo, one would have to study the humanities. If Michael Corleone was taught by his father to “keep your friends close but your enemies closer,” anyone who seeks to understand the other, or the enemy, will necessarily have to grapple with the humanities.

Additionally, the very idea of the university as a place to further bourgeois careerism is a product of only the last century, thanks to the progressive and pragmatic reformers who were influenced by the vision of an emerging urban, technological, and mechanistic society as the brave, new world we were destined for, and who thought education should reflect this new reality. But universities were first created in medieval Europe as places to study the arts and humanities: literature, theology, philosophy, and the coming “canon” created by the Renaissance humanists.

Part of the idea of the universities, and of the humanities more generally, was that the study of things human would awaken the mind and move it to seek after the good, the true, and the beautiful. Those seminal texts, now decried by some humanities departments, were chosen on account of their density, depth, and beauty. To study the humanities, in the eyes of the original mission of universities and their founders, was to make one a better human. The mission was not to spend half a decade of one’s life learning the ins and outs of the skills necessary for a certain job. That is what apprenticeship was for.

The aim of the culture of the humanities is to foster an ethos of understanding—understanding what it means to be human but, more importantly, understanding what one has inherited. In this way the humanities is profoundly conservative at its heart. Which is among one of the reasons why the humanities are under assault by the external pressure of a growing mechanistic and economistic way of life, and from within by those who preach the language of “consciousness” but only mean it in a political-economic-social context rather than a truly cultural and human one—thereby turning the humanities into a conduit for politicized social-sciences that destroys the humanities altogether. The humanities serve as a transcendental bridge, linking past, present, and future with destiny. And as we all know, man does not live by bread alone.

The human, the most exquisite of God’s creation according to both ancient philosophy (Platonism, Aristotelianism, and Stoicism) and theology (Abrahamic), was always more than a consuming animal. Man was as much a cultural and social animal as he was consumeristic. Culture enlivens man, informs man, and helps to direct man to higher ends. Affectivity and relationality fed off one another. After all, when God saw Adam’s loneliness in the garden he fashioned woman from his rib—his side—signifying their relational equality and bound them together. As St. Augustine so eloquently said in City of God, “The woman, then, is the creation of God, just as is the man; but her creation out of man emphasizes the idea of the unity between them.” I would add that it is also important that, in the Genesis account, the first humans have a name and relationship with one another which invokes the importance of affectivity and intimacy—the thus-named and relational nature elevating humanity’s social nature above a dry communitarianism, hoping to avoid the problems of bare life.

People once worried about book burnings. People still complain about the danger of “censorship.” There has not been a more successful book burning and censorship campaign than the assault against the humanities. The elimination from the consciousness of people the very works, language, and culture that had informed communities and individuals for centuries—nay, millennia—is an achievement that would make Captain Beatty blush. And there is a certain irony that Ray Bradbury foresaw the day when (formerly) educated and literate individuals, such as Beatty, would be leading the destruction of the humanities because of the contradictory, obscene, and “regressive” views and writings contained in the great books, much like how esteemed faculty and professors take a culling knife to the classics of literature and philosophy with deliberately harmful intent.

It is said that we are increasingly living in an “anxious age,” an atomized and uprooted age, an age where “culture” is everywhere but, in reality, nowhere. We have become wanderers—strangers in a strange land despite having, in most of our cases, been born and raised in a region that once breathed with the spirit of Homer, Sappho, Plato, Aristophanes, Aristotle, Virgil, Cicero, Moses, Augustine, Dante, Milton, Shakespeare, Bradstreet, Shelley, Melville, and Hawthorne. We are now Odysseus and Aeneas lost in the middle of their journey but without the backstory and no destination to aim for.

One of the cornerstones of conservatism is humanism. One of the most basic aims of liberal arts studies is to familiarize students with the longstanding and inherited traditions of literature, philosophy, and theology. One’s personal identification with a literary, philosophical, or theological school is not so much the point; rather, it is to inculcate the person with those who have come before us in dealing with those “enduring questions.” The death of the humanities is nothing less than the death of the human being and of human culture.

Is it any wonder, despite the most egregious of appropriations of the term “humanist” (especially by “secular humanists”—of whom they are among the most illiterate of the humanities, for they do not even realize the origins of humanist thought deep within the Christian religion), that people hate themselves despite claiming to love themselves and desperately seek to transform themselves to fill their restless heart? Is it any wonder that humans prefer to have their eyes glued downward on their phones, as if ready to embrace the pit of hell, rather than looking upward to the stars of the heavens and gaze upon the natural beauty of the earth? Is it any wonder that the dream of transhumanism is aggressively being pursued and discussed as if a reality? Dante looked to the stars to be moved while we look to Instagram, Facebook, and Twitter to be moved.

People lament about the death of culture, but they know not what this entails and what the signs of that decline are. Where are the great men and women of letters? The fact that Ernest Cline is the savior of culture should be disconcerting to anyone who has read the likes of Chaucer, Shakespeare, Milton, or Melville. After all, where is the salvation of culture found in Mr. Cline’s novel now turned film?

In the first book of Politics Aristotle makes a direct reference to the ninth book of Homer’s Iliad. When Augustine penned City of God he assumed his readers to be familiar with the works of the Platonists, Virgil, Cicero, Sallust, Varro, the Bible, and the great stories of Rome’s founding mythology: Romulus and Remus, Lucretia, and Aeneas. Dante’s Divine Comedy is not simply allegory of his own tumultuous experiences in Florence; it is also journey through the very soul of Western literature, philosophy, and theology from start to finish. Shakespeare is riddled with Biblical and literary references that lessen the greatness of Shakespeare when missed by the reader. Jonathan Swift, that great satirist, was engaged in his own cultural criticism in satirizing the philosophies of Bacon, Hobbes, and Locke when Gulliver meets the Laputans.

This is, by and large, all lost to people today. Nostalgia and sentimentality, as Sir Roger Scruton has said, are underrated aspects of the human condition. Anthony Esolen has opined that we are not entering a new pagan age—for the pagans had great stories behind them and their consciousness, which is clearly not the case in the descent into the new mechanistic man; the consummation of the Baconinan-Hobbesian man as a body of matter in motion or La Mettrie’s L’homme machine.

The culture war cannot be won without recourse to the great repository of culture. And there is a two-front war against culture: One from the outside (technology, economism, and globalism) and the other from the inside (who do so with quite deliberate intent). Any lover of culture, true culture, is a lover of the humanities at heart because the humanities are the wellspring of culture—the very seeds and roots of culture. The joy of the humanities is that it cannot be bought (or should not be bought). True culture—much like Augustine’s concept of “true religion” worshipping the God where human desire finds its ultimate felicity—has the power to direct the soul to the good, the true, and the beautiful and to inculcate into man an appreciation of the good, the true, and the beautiful.

This was originally published with the same title in The Imaginative Conservative on July 10, 2018.

The Collapse of Christian America

A Critique of Eric Voegelin’s Christianity

Re-Programming Ourselves to Be Mindful