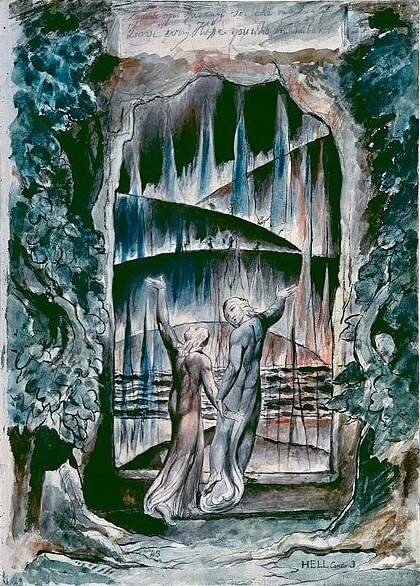 “Midway along the journey of our life / I woke to find myself in a dark wood / for I had wandered off from the straight path.” Thus opens Dante’s grand epic of love. But why did the pilgrim poet have to descend into hell—of all places—before he could climb Mount Purgatory and take his seat in the blossoming bud of the white rose of heaven? The Divine Comedy is a love epic. It is the greatest love epic. It is the most ambitious love epic ever crafted by the hands of a mere mortal. Dante descends into hell to learn to love again by the most extreme examples of misdirected love and also through his relationship with Virgil.

That there is much depth to Dante is an understatement. There is much allegory, theology, political commentary, reflections on history, poetry, and economics, that give life to Dante’s brilliant masterpiece. There are many ways to understand the multilayered world of hell: From its construction to why, at the lowest circle—rather than a fiery pandemonium as imagined by John Milton—the lake of hell is cold, dark, and frozen. Yet the descent into the abyss that is the inferno is perplexing at first glance.

In the beginning of all three parts of the Divine Comedy, Dante invokes poetry to guide him. “O muses! O high genius! Help me now!” he frantically cries at the beginning of the second canto of the Inferno. Before ascending up the slopes of Mount Purgatory, Dante also invokes the muses again, “Here let death’s poetry arise to life, / O muses sacrosanct whose liege I am! / And let Calliope rise up and play.” By the time he enters into heaven, Dante invokes Apollo (beyond being god of the sun, he was also the god of poetry), “O great Apollo, for this final task, / make me a vessel worthy to receive / your genius and the longed-for laurel crown.”

Dante invokes the muses and gods of poetry in his journey because poetry, up through Dante’s time, always had love as its great theme. The epic poetry of Homer, though surrounded by the maelstrom of war, chiefly concerns itself with love. The Troubadours of Provence were love bards and poets who set the medieval world aflame—and Dante meets one such Troubadour on his ascent up Mount Purgatory.

But in the Latin mind, no greater love poet stood out than Dante’s own guide through hell and purgatory. Virgil was the chief poet of love in the Roman world. His epic is a grand tale of love which Dante feels insignificant in comparison to. “I am not Aeneas,” he tells Virgil before journeying to the underworld. Virgil’s additional poetry, like the Eclogues, also chiefly concerns itself with love. “Omnia vincit amor,” as Virgil famously wrote in Eclogue X.

By invoking the muses of poetry and in being guided by Virgil, Dante tips his hand and reveals to the astute reader (or listener) that the journey into—and through—hell will require the flowering of love. Hell, after all, is a loveless place. And Dante’s journey is one in which the muses of love must nurture him.

The initial relationship between Dante and Virgil is standoffish and cold. While Virgil has been selected by Beatrice, Virgil treats Dante more as an insolent child than a son. Virgil is, at the poem’s beginning, more of a reluctant guide. He regularly accosts Dante for his stupid questions and repeated mistakes journeying through hell. Dante repeatedly faints, much to Virgil’s chagrin.

Two things are missing in their relationship when they enter into the gates which infamously read: ABANDON ALL HOPE YE WHO ENTER HERE. There is a lack of trust between Dante and Virgil. As such, there is a lack of love between the two poets. In fact, the two missing ingredients are also the two missing values that permeate hell itself. Moreover, the lack of trust and lack of love are also envisioned as being united together. Without trust there can be no love. Without love, there can be no trust.

While the two poets come closer through their trials and tribulations, the first major transformation in Dante and Virgil’s relationship is when they are at the gates of the City of Dis. The famous gorgon Medusa guards the entry. As she approaches the two, Virgil shields Dante’s eyes. This is ironic for several reasons. First, Virgil had informed Dante not to look at Medusa’s eyes after crossing over the River Styx. Virgil has come to care about Dante, as evidenced by the fact that he informed Dante not to look into the seductive eyes of the formerly beautiful gorgon slayed by Perseus. Dante, we mustn’t forget, is still alive while everyone else is dead. If Dante looked into the eyes of Medusa he would have been killed. Virgil’s reminding Dante not to look into the eyes of the gorgon was done out of an act of concern for the pilgrim poet.

Second, the fact that Virgil shielded Dante’s eyes also indicates his lack of trust. Despite informing Dante of the deadly powers of the gorgon seductress, Virgil still places his arm and hand over Dante’s face to prevent him from being turned to stone.

Third, and perhaps most ironic of all, the fact that Virgil shields Dante’s eyes indicates his growing love for the poor pilgriming soul even though the two still haven’t reach that sacred bond of trust. (We should also remember that the ninth circle of hell is reserved for all of the traitors who betrayed the trust of their benefactors, country, or family.)

The lack of trust between the two protagonists is soon remedied. Between cantos nineteen and twenty-one, there is a tremendous, grace-filled, metamorphosis between the two men. Dante makes the growing love exhibited between he and Virgil the central image in a place of horrifying and pitiable images. This is, in my view, intentional on the part of Dante. Because they are in hell, and hell is a loveless place, love needs to grow into a burning fire between Dante and Virgil in order for the two to further proceed down the abyss in order to exit hell and begin the long and arduous journey up Mount Purgatory.

In the nineteenth canto, as the two are in the third bolgia of the eighth circle of hell, Dante is tired on the slopes of the mountain. Yet Dante wishes to have a conversation with one of the damned souls (soon to be revealed as Pope Nicholas III). Exhausted, Dante appeals to his master becoming father-figure:

Who is that one, Master, that angry wretch,
who is writhing more than any of his comrades,”
I asked, “the one licked by a redder flame?”
And he to me, “If you want to be carried down
along that lower bank to where he is,
you can ask him who he is and why he’s there.”
And I, “My pleasure is what pleases you:
You are my lord, you know that from your will
I will not swerve. You even know my thoughts.[1]

Here is the first great expression of self-giving and sacrificial love in the whole of the Inferno. Moreover, trust between the two is growing which allows for the self-giving love that binds the two souls together. Virgil takes Dante in his arms and whisks him down the slopes:

Then he took hold of me with both his arms,
And when he had me firm against his breast,
He climbed back up the path he had come down.
He did not tire of the weight clasped tight to him,
But brought me to the top of the bridge’s arch,
The one that joins the fourth bank to the fifth.
And here he gently set his burden down—
Gently, for the ridge, so steep and rugged,
Would have been hard even for goats to cross.
From there another valley opened to me.[2]

There is no more fear or distrust in Dante reaching out and asking for Virgil’s help. Furthermore, Virgil is no longer incensed at Dante’s questions and pitiable condition. As the intermediary guide, a sort of in persona Christi in the journey through hell, Virgil is there to help carry Dante when he is exhausted and cannot continue any longer. Love, as we begin to see in flesh and blood imagery and activity, truly does conquer even the deepest levels of hell.

Despite the progress made in loving each other, wherein Virgil has become more of a father to Dante than a mere guide, there is a final barrier for the two to overcome. There is a hidden, invisible, wall the two have yet to cross. That hidden barrier is forgiveness.

Though the two have learned to love each other in a self-giving and self-sacrificial way—with Virgil lifting up onto his being the burden that is Dante—the two have yet to learn the high value and virtue of forgiveness. Before they can proceed into the final circle of hell, this incredible literary construction on Dante’s part must be realized: The two must learn to forgive each other as the highest expression of their learning to love.

In the thirtieth canto that final barrier of learning love is overcome. Dante, the typical childish pilgrim as he is at times in the Inferno, begins to dally and waste time absorbed in a debate between two narcissistic sinners (appropriately near a pond of water). Virgil is angered by Dante’s dallying and accosts him. Dante tells us that in hearing Virgil’s anger he was filled with shame. Upon looking at the face of Dante, Virgil recognizes he has wronged Dante in his outburst of anger. Virgil tells Dante to forget about his outburst and forgive him. Dante pardons Virgil’s outburst in the first and only act of loving forgiveness in Inferno:

I was listening, all absorbed in this debate,
when the master said to me: “Keep right on looking,
a little more, and I shall lose my patience.”
I heard the note of anger in his voice
and turned to him; I was so full of shame
that it still haunts my memory today.
Like one asleep who dreams himself in trouble
and in his dream he wishes he were dreaming,
longing for that which is, as if it were not,
just so I found myself: unable to speak,
longing to beg for pardon and already
begging for pardon, not knowing that I did.
“Less shame than yours would wash away a fault
greater than yours has been,” my master said,
“and so forget about it, do not be sad.
If ever again you should meet up with men
engaging in this kind of futile wrangling,
remember I am always at your side;
to have a taste for talk like this is vulgar!”[3]

In Dante’s sojourn through hell, the great poet-pilgrim learned how to love again. It was his forgetting how to love that caused him to wander from the straight and true and into a dark wood reminiscent of the cold darkness of hell. Hell is a cold, dark, and loveless place. The only light, warmth, and love that flickered through the nine circles was the love that Dante and Virgil learned in the presence of each other. Having learned love they conquered hell together and began their ascent up Mount Purgatory with the beautiful stars as their guide, “I saw the lovely things the heavens hold, / and we came out to see once more the stars.”

This was originally published with the same title in The Imaginative Conservative on December 4, 2019.

“What Ish My Nation?”: W.B. Yeats and the Formation of the National Consciousness