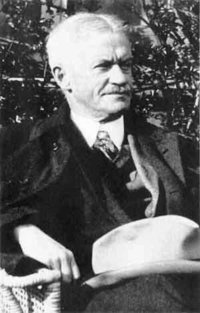 Albert Jay Nock was an important literary and social critic of the first-half of the twentieth century. Part scholar, part pundit, part prophet, Nock’s many essays and books constitute a treasure for conservatives. Furthermore, Nock introduced the term “libertarian” into American political discourses—while deviating from the egalitarian socialist roots offered by Pierre Joseph Proudhon—equating it with its now indelible anti-statist connotation. With only a handful of critics and intellectuals, Nock was one of the first to understand the dark side of the New Deal and the creeping indentured servitude that would come with the expansion and centralization of federal power and reach.

Many Americans fear the dysfunction in Congress and the rise of an “activist” Supreme Court. Both worries are misplaced, at least in relationship to the larger problem at hand. Congress is dysfunctional because Congress has abdicated its political power and responsibility to the Executive Branch. Likewise, the Supreme Court could be truly activist—in a leftwing or rightwing direction—but is rather mundane and tempered. Franklin Roosevelt’s court-packing plan didn’t succeed, but the power of the Supreme Court was essentially wrangled in by the New Deal. The Supreme Court is now nothing more than a sanctifying lackey to the growing imperial presidency—which was Roosevelt’s goal anyway.

Although a liberal, historian Arthur Schlesinger Jr. realized that the growing role of the presidency transformed American politics. He dubbed the presidential office “the imperial presidency.” He noted in the book of the same name that the White House prior to Franklin Roosevelt was small, had limited staff, and was essentially checked by the powers and prerogatives of Congress and the Supreme Court. That changed with Roosevelt’s election and the transformation of the executive branch into the strong-arm of American politics. As the presidency grew in power, activism, and importance, Congress shrunk in its power and responsibilities, the Supreme Court was curtailed and made a partner to the goals of the presidential administration, and the White House staff grew exponentially.

Schlesinger’s work—published during the crisis of Watergate and thus often read as an esoteric indictment of Richard Nixon’s many abuses—highlighted the realities of an out-of-control West Wing that had superseded its Constitutional authority for decades. And the presidency amassed this power because Congress and the Supreme Court allowed it to happen. More recently, Yuval Levin has written that Congress is weak because Congress wants to be weak. He is right. Congress would rather piggy-back and ride the coattails of a popular presidency or simply do nothing to stop greater presidential centralization. If Congress wanted to, it could reclaim its Constitutional duties and be a check against the presidency.

While some conservatives might point to certain progressive Court rulings as evidence of an activist Court, the Supreme Court is also a pawn in presidential imperialism and growing executive bureaucracy. In the early republic the Supreme Court clashed with the presidency on numerous occasions. The Marshall Court was the true activist Court in American history; Thomas Jefferson made his displeasure with the Court well known during his presidency. The point, here, is to illustrate that the Supreme Court could—and has—been a check against the ambitions of the presidency.

Where the Marshall Court was explicitly Hamiltonian in its vision, the Lochner Era of the Supreme Court was minimalist and conservative—often checking progressive policy initiatives. Several New Deal programs were overturned as unconstitutional in the early struggles between the Supreme Court and Franklin Roosevelt. Part of Roosevelt’s court-packing scheme was to destroy the conservative majority on the Court. Though the scheme failed, Justice Owen Roberts came to side with the New Deal as time moved on, arguing—like Chief Justice John Roberts has in certain recent rulings—that he was doing so to save the independent integrity of the Court.

However, Roosevelt’s long presidential tenure meant he was able to replace the older generation of conservative justices who opposed the New Deal and stack the Court with justices who would rule in his favor. The idea of an “activist” Court is really a misnomer. The activist Court era born from the Roosevelt Administration was a subjugated Court—a Court that didn’t advance anything on its own but which sanctified new liberal programs and policies promoted by the presidency. The Court was never the first mover of increased liberalization but the sanctifier of liberal policies promoted by an activist and out-of-control presidency. Those who bemoan the “activist” Court miss the real problem: There now exists an activist presidency sustained by a subjugated Supreme Court that sanctifies the executive imperium.

This returns us to Nock. As just one of a handful of New Deal critics, Nock’s important contribution to political philosophy was Our Enemy: The State. In the work he differentiated governance (and therefore government) with the state (and therefore statism). Governance, for Nock, was very much akin to the “night watchmen state” of Robert Nozick: the minimalist maintenance of law and order by political structures that allows civil society to operate and flourish. The state, by contrast, corrupts governance because it seeks to control and dictate the lives of people. Rather than provide for the order necessary for civil society to grow and flourish, the state extends its tentacles into civil society and erodes the space between the individual and governmental structures—that space called civil society. By seizing control of civil society and passing laws dictating how people are to act, the state slowly seizes control of our lives.

Those who argue for the greater efficiency of private charity against state-run programs do a poor job in framing the discussion. This is an important issue, and one that conservatives should not let pass away because of fumbling libertarians who preach the efficiency of private over public services. The real reason why conservatives should promote charitable and other non-governmental welfare and health services is because non-governmental organizations are the reflection of a healthy civil society. The more non-governmental programs and institutions working to alleviate the stress of the human condition, the less the state controls every aspect of our lives.

The argument over efficiency is not the real argument that matters. And, frankly, the efficiency argument simply shows contemporary libertarians—far removed from Nock as they now are—as nothing more than an alternative side to the Whiggish, materialistic, and mathematical liberalism that so dominates Western society and is the cause of many of our ailments and present discontents. These libertarians concentrate on numbers, dominated by a mechanical and efficient mathematical worldview much like the progressives of old; the only difference being they conclude private services are more efficient than public services. These libertarians know nothing of the Nock’s deep musings on civil society, the social nature of man, the value of reverence and religion in public life, or his reflections on “high” and “low” civilization.

The limited reach of the state, allowing for all sorts of human activities to flourish on their own, was the mark of “high civilization” in Nock’s writings. When civil society was eroded and subdued to state intervention there was nowhere civilization could go but downward. Instead of liberating man’s desire to higher and greater things, a subtle nod to Nock’s own Episcopalian (Christian) heritage and beliefs, the state shackled man to mediocrity, comfort, and security.

Americans have become fixated on the presidency, which is now the strongest and most centralized branch of the federal government, seeing it as the instrumental arm of their desires. As a result, local government, state government, Congress, and the Supreme Court all suffer. The ingenious system of checks and balances, which does aim at conflict among the branches in a very erudite and Machiavellian manner, along with federalism (the primacy of the local governments and state governments), are all trampled beneath this presidency that is stronger and more extensive than any king or emperor in the past. Americans need to realize that their salvation will not come from the presidency. The imperial presidency is our enemy; it is the enemy of the people. Nock was right. The continued growth of executive policy and the bureaucracy needed to actualize those policies only stifle what remains of civil society and continue to infect every aspect of our lives slowly enslaving us to the dictates of executive orders.

But Nock was not in total despair. Drawing on Christian themes, Nock believed it was necessary to form a “remnant”: for opponents of the Leviathan state to associate with like-minded travelers and form their own programs to pass on the great wisdom of the past, so that when the time came, this remnant could reassert itself and restore self-governance to the people. We who refuse to listen to Nock, a modern-day Samuel, continue to become “more like the nations” and less “exceptional.”

This was originally published with the same title in The Imaginative Conservative on November 5, 2018.

Political Consciousness and Polarization in the Philosophy of Eric Voegelin

From the Multiversity Cave: Conclusion