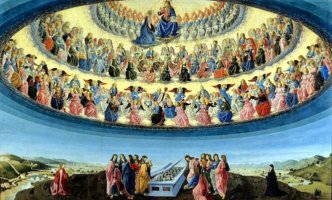 St. Thomas Aquinas was described as the foundational philosopher for all philosophers by Pope Pius XII. There are many faces to the angelic doctor. He is the technical philosopher of realism who baptized the best of Aristotle into the Catholic faith. He is the great mystic whose writings on the Ladder of Being inspires theologies of beauty, love, and divinization. More recently, he is a thorough-going Neoplatonist who defended Neoplatonism with Aristotelian language.*

If people have familiarity with Thomas Aquinas it is probably in association with the phenomenon of Thomism. Inside the Thomist machine, the further familiarity with Thomas is probably associated with ontological realism and that Thomas was very specific about what it means to be human and the technical specificities of Catholic theology and doctrine. This public portrait, or understanding, of Thomas is deficient on many levels. It also distracts from his enchanted and mystical cosmos, something that—in our age of disenchantment—ought to be the primary recourse to the great church doctor rather than the ontological realism that is constantly pushed by the neo-Thomists and their followers.

“Different kinds of things produce in different ways, those on a higher level producing in a more interior way,” writes Thomas in Summa contra Gentiles (4.11). Thomas’ cosmology and doctrine of the soul are vitalistic. Everything has a particular soul to it, and these souls have particular life-forces destined for particular ends. To untrained eyes and ears, Thomas comes off as crypto-pantheistic; as do a great number of the Church Fathers and medieval mystics and philosophers. However, whereas pantheism sees everything containing the same one soul fallen from the Cosmic Soul, Thomas’ cosmos is made up of “different kind[s]” of souls “produc[ing] in different ways.” Moreover, the souls of created things have created souls with particular ends and are not emanated parts of the Cosmic Soul which make us depreciated instantiations of the One. By having a particularly crafted soul for a particular end, we are naturally deficient instantiations of the One as in pantheism.

In another section of Summa contra Gentiles (3.97-98), Thomas also writes that the diversity of souls “which makes things differ in species makes their behavior different too.” This variety of life “also brings with it diverse relationships to matter. . . [a]nd these diverse relationships to matter bring with them a diversity of agencies and capabilities of being acted on [by God].” It is clear from Thomas, as it is with traditional Christianity, that the wonderous and awe-inspiring, indeed, mystifying, understanding of the cosmos and Ladder of Being is not the homogenous pantheism of new age spirituality but a deeply diverse—in the truest sense—orchestra where everything is instantiated in its uniqueness but also part of a grander project. That project, per Thomas, is to “reflect and express [the goodness of God].”

Thomas’ Ladder of Being is at once hierarchal and concentric. Everything comes from God who created ex nihilo. Everything moves to God, who is the law of attraction—“That God, which ever lives and loves / One God, one law, one element, / And one far-off divine event, / To which the whole creation moves” as Tennyson poetically put it. At the bottom of the hierarchy, furthest from the center of God, is non-living matter. Non-living matter has no soul, no anima, but is still essential for anima, because it is in non-living matter that the lowest level of life is rooted in: plants. “The living things closest [to matter] are plants, in which there is already some interior production, turning the inner juices of the plant into seed which, committed to earth, grows into a plant.”

Following from Greek philosophy, Thomas gives all plant genera the vegetative soul. The vegetative soul is defined by its ability to generate. While the plant-soul has no awareness, and is not made in the image of God, it has a distinct soul to it; thus, Thomas’ cosmic Ladder of Being is thoroughly vitalistic. After all, without vitalism there can be no diversity and distinctiveness to the cosmos—something that reductionist materialism must necessarily exhaust to.

“There is another level of life above that of plants: that of animals endowed with sense awareness so that they have a form of production peculiar to themselves, starting indeed from outside but up inside, and getting more interior the further it progresses.” The animal soul stands above the vegetative soul for its sense-awareness. And within the animal genera, as we can see from Thomas, there is complexity to the diversity of animal life. Some animals are simpler and further down the animal chain than the more complex, “more interior,” and “further progress[ed]” who are higher on the animal ladder. In other writings Thomas further elaborates on, and classifies, the distinctions in animal life between soul-activity, the levels of sense-awareness, motive power, and affective and aggressive emotions.

The distinguishing characteristic of animal life, the animal soul, is sense awareness and what sense awareness aims for. The animal soul aims for enjoyment through the realization of affective emotion. The “capacity for affective emotion,” Thomas writes in Quaestio Disputata de Anima, “empower us to enjoy things delightful to the senses.” Humans do share this with animals, but this is not the end for humans though it is for lower animals.

“So the highest, most perfect level of life is that of the intellect, for intellect can reflect upon itself and understand itself.” Humans, being made in the image of God—who is Truth, Wisdom, and Love—therefore possess the intellectual soul which is aimed at understanding. Human cognitive capacity to understand notions, judgments, and, ultimately, the moral law, is that which distinguishes us from the rest of creation. This distinguishing from the rest of creation is not a separationist atomism but akin to the steps of a ladder. Humans exist as the top step of the material world, though the ladder itself is an integrated whole. Humans are perfected by participating in Truth, Wisdom, and Love—a freedom which only rational souls are capable of as Thomas explained in a much earlier section of Summa contra Gentiles.

Yet, humans are most like God in that they also possess the tripartite soul which mirrors the Trinity. The human soul is not merely a rational soul, but it subsumes the animal and vegetative souls as well. Love generates. Love feels. Love understands. The Godhead generates. The Godhead feels. The Godhead understands. So it is that humans generate, feel, and understand. When St. Augustine explains the effects of sin as turning man into the beasts of the fields, it is because humans reject their fundamental rationality; that is, they reject what makes them human (the rational soul). Sinful humans descend (fall) to live like animals. Fallen man lives for mere sensation and bodily pleasure. But the rational soul that defines man thirsteth after the Lord and desires to dwell in the House of the Lord.

“God’s providence,” Thomas maintains, “orders everything to a goal—his own goodness.” The goodness and beauty of God is what the whole cosmos, and each instantiated form of life in the cosmos, aims for. Everything is also interconnected in this Ladder of Life reaching up to God and coming from God. To reflect and embody the graces of God, his beauty, love, and goodness, is to what the whole cosmos is ultimately ordered, according to Thomas.

The variety of lifeforms, each with their role to play in magnifying God’s beauty and goodness, come together in Love, “that unitive force” which binds the whole creation together in a grand song of life. Thomas’ cosmos, his Ladder of Being, can best be understood like a grand waltz or symphonic orchestra where everyone in their uniqueness has a part to play. But each instantiated form of life does not exist on its own island. Everything is intertwined with one another. If a flutist or harpist performs poorly, the rest of the performance suffers. If a single dancer in a dancing unit performs poorly, the rest of the performance suffers.

In our sterile and mechanical age Thomas’ cosmos of life is enchanted and enchanting. Indeed, it is mystical, mysterious, and mystifying. It is cosmos that wholly and totally came from the mouth of the God of Love. Modern man is starved for beauty and goodness; modern man is starved for substance. Substance is offered in Thomas and the full Christian vision—not the cliff notes version of “be kind” and disorderly consumer-oriented worship.

God’s love extends to all created things. And all created things are ordered to a goal. Thus, the cosmos, with man at the head, is directed toward God in a grand chorus of praise. All things truly do move to Love, “That God, which ever lives and loves . . . To which the whole creation moves.” This Thomas is just as much part of the Christian tradition, and an essential part of the angelic doctor that is often overlooked. The rainbow of Thomas Aquinas is not the empty rainbow of modernity. In fact, this side of Thomas is so perfectly situated to help reenchant our dead world and bring it back to life, should it be the Thomas more people become familiar with and find a friend in.

This was originally published with the same title in The Imaginative Conservative on June 9, 2019.

The Problem of Belloc

Has the Digital Age Eclipsed the Television Age?