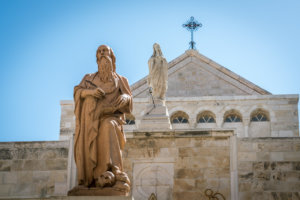 “In the beginning was the Word, and the Word was with God and the Word was God.” The gospel of St. John is the most poetic of the gospels and contains the highest Christology of the gospel accounts of Jesus Christ. Some scholars see a division of the work in thematic groups—the book of “signs” and the book of “glory.” While not wrong, such obsessive commentary misses the most obvious literary connection between John and the biblical tradition leading up to him: The creation account in Genesis.

The opening of the gospel of St. John deliberately parallels that of the opening of the book of Genesis. Biblical scholar Andreas Kostenberger says there is “canonical link between the first words of the [Hebrew] Scriptures and John’s Gospel.” That canonical link serves two obvious purposes. First is to bridge continuity with the Jewish tradition to Christianity. John’s gospel, the latest of the four gospels, was written in the late first-century A.D.—after the destruction of Jerusalem and the particularity of the Christian community coming into being after that traumatic event. Thus, John’s gospel continues to maintain the Jewish roots of Christianity by paralleling the first book of the Pentateuch. Second is the Christology of John which links Christ, as the Word, with the spoken Word of Genesis and that the light of Genesis 1:3 is paired with the “light of mankind” by John 1:4. This Christological link to Genesis also serves to establish Johannine Christology as the way, truth, and life; the light of mankind needed to live, love, and learn.

This is all well and good, but I would press another issue that is even more obvious and important. Christians are still familiar with the doctrine of creation. Creation from Nothing. But the question of why God would create is still one that gets raised time and again. John’s gospel, then, also gives an answer to the question of creation and, in so doing, gives the template for man’s glorious destiny.

The Christian account of creation, in its fullness, mirrors that of the Trinity. Much like how St. Augustine argued the imago Dei was really an imago Trinitatis (image of the Trinity), so too does one find in Christian tradition a threefold schema of creation which is relevant to John’s gospel and the subsequent incarnation when “the Word was made flesh.” Creatio ex nihilo is widely remembered, perhaps because it is the first of the tripartite understanding of creation. But creatio ex nihilo leads to creatio ex amore Dei (creation from the love of God) which culminates in the imago Dei where the reason for God’s creating, love, are bound together; reason and love are inseparable from each other. As Augustine said, the heart is restless until it unites with God—and until the heart unites with the God, the self is not completed until this union.

To answer any question is to presuppose rationality or inquisitiveness; for only a rational animal seeks answers. Thus, the image contains—as Christian tradition has always maintained—the seed of man’s rationality to know the Good, True, and Beautiful. Reason, in Christianity, is not the modern utilitarian application of reason to more easily obtain that which man desires as in the Hobbesian-Lockean account. Reason is that which allows man to know nature, the Good, and, therefore, God who is Truth itself. To find the answer to the question, which is Love, completes the journey for a journey only comes to an end when its destination is reached. For there to be no answer means man would be left adrift at sea with no end in sight. All he has is the struggle against the sea until his inevitable death. The rejection of truth, epistemological nihilism, leads to a nihilism in embodied life.

Therefore, to eliminate the imago Dei is to cut back the creation formula which, inevitably, reduces us back to creation from nothing and the triumph of Jean Paul Sartre’s nihilism. Because man comes from nothing, he cannot find a reason for his existence and cannot love though he desires to love. Since man is not created in wisdom for wisdom and in love for love, he can neither find wisdom nor love in life. Humanism, true humanism—the exceptionalism of man which has explicit, and specifically Christian, roots—is also hewn down (and replaced with a shallow “secular humanism” which is secular but not humanist). Without the image which completes the creation from the love of God we are left with a hallow emptiness that is creation from nothing.

Where the imago Dei allows humans to relate to each other as subjects through their relationship with God, as subject, the eradication of the image exhausts itself in objectification and the lust for domination. In this respect there is much (half) truth in Sartre. For Sartre’s understanding of the world is a secularized Augustinian understanding where the lust for domination is all there is. Without God the face-to-face encounter always dialectically flips to a subject-object relationship where I, to safeguard my subjectivity, objectify the other or allow myself to be objectified. The bleak existentialism of Sartre and his heirs is one that rejects foundationalism, humanism (in the truest sense of the word), and love altogether. Though he still can’t escape the fact that the struggle for love is ever present in the human person. His conclusion, with man divorced from God, is that love is ultimately futile; but we go on trying to love. How unfulfilling and, ultimately, nihilistic.

The incarnation and birth of Christ, with Mary as the role model of the receptivity and embodiment of love through her loving embrace and trust of God, is the raison d’être for man, the earth, and the cosmos. The cosmos that was created and ordered by love, had Love itself penetrate the cosmos. The inquisitiveness of man, which is a mark of separation from the rest of creation, does not rest until it reaches Him who is Love incarnate. In Christianity, more than any other religion or philosophy, Eros and Logos are infused in unity. Love without reason leads to permissive hedonism; reason without love, leads to sterile rationalism that exhausts itself in transhumanism.

In the beginning was Love and Love is the alpha and omega. The inquisitiveness of man is only satiated in and through love. All great literature, and every culture, insofar that it contains truth, directs the open eye and ear to this reality. The greatest poem of the nineteenth century concluded with the vision of “That God, which ever lives and loves, One God, one law, one element, And one far-off divine event, To which the whole creation moves” which calls us to attention and uplifts our souls to Love and Truth itself. It is better to love and lose than never love at all, but Tennyson’s poem ends with a vision of the God of the cosmos who is necessary to love in the first place; and as Milton knew, this God is necessary for love not to be the lowest end in life but the highest end of human existence.

The real claim of Christmas, for Christians, is that Truth and Love penetrated the cosmos. Christmas is a warm, loving, and tender season precisely for this reason. That warm fire, or bright sky, or joyful company, is made possible only because that God which ever lives and loves—to which the whole creation moves—entered the creation making love possible, and making love the highest joy in human life.

This was originally published with the same title in The Imaginative Conservative on December 16, 2018.

Polis, State, and the Common Good