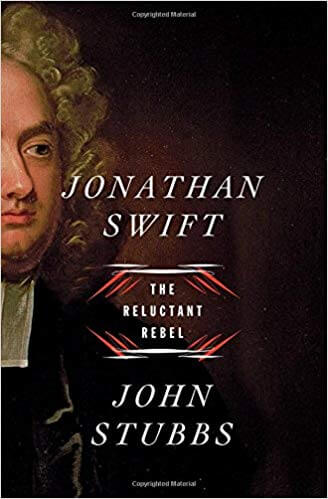 Jonathan Swift became the most notorious writer in Europe during his lifetime. Author of works as infamous as A Tale of a Tub, Gulliver’s Travels, and A Modest Proposal, Swift’s prolific literary output earned him celebratory and scorn. But just as Lemuel Gulliver traversed many diverse places and encountered lively and horrifying peoples, so too did Jonathan Swift travel over the lands of Britain and encounter many lively and demeaning people who served as the basis for his literary creations and satire.

John Stubbs should be commended for his biography of the great English satirist and clergyman. The work is not merely a biography of Swift; it is also an account that details the turbulence of the times in which he lived, painting lively, if not brief and concise, portraits of the many figures and personalities with whom Swift interacted. Thus the work is part biography, part history, and part literary criticism.

Swift was born and raised in a maelstrom of change. He grew up in modernity but had a yearning preference for the past. He was surrounded by men of science, grew to dislike them, and therefore began to more fully appreciate—not without undo criticism—the men and ideals of antiquity. He lived through revolution, and although accepting the Revolution, Settlement of William of Orange, and the Hanoverian Dynasty, he embraced and defended the structured and hierarchy politics of the High Tories against the more radical Whigs and Nonconformists. As Mr. Stubbs put it best, when Swift publicly broke with the Whigs in 1710, “He was putting on, rather than changing, his coat.”

John Stubbs’ biography of Swift might be counted as a work belonging to the New Historicism. It is hard to lift Swift out of the context of his times, and Mr. Stubbs spends a lot of time detailing the very times in which Swift lived. The experiences of the “Glorious Revolution”—which was, as Mr. Stubbs says, nothing less than a foreign invasion—the Irish Campaigns of William of Orange, and the constant struggles between England and France helped to lay the foundation for Swift’s satirical critique of imperial follies and political rivalries through Lilliput and Blefuscu in Gulliver’s Travels.

Furthermore, Swift’s entanglement in church politics also served as the basis for his ridiculing the empty self-righteousness of the Nonconformists and “superstitious” thinking of Catholics and High Church Anglicans in A Tale of a Tub. Swift was, however, a High Churchman. He held the Nonconformists in contempt, in part, because of their radical politics and hubristic outlook on theology. This might strike contemporary evangelicals and the heirs of the dissenting church tradition as odd, but context is paramount. John Toland, for instance, a radical Nonconformist from Ireland, penned Christianity Not Mysterious in 1696 wherein Toland argued everything contained in the Gospels could be rationally explained and therefore eliminate all miracles and mysteries from Sacred Scripture (since miracles contradict the law of nature and cannot be counted as “rational”).

Mr. Stubbs reminds us of the gist of the Nonconformist works in Swift’s day, “individual minds can experience revelation for themselves.” This meant to free individuals from the dogmas of established churches and creeds, Anglican or Papist, and unlock the true nature of life, world, and religion, for themselves. While hyper individualist and low church Protestants may gravitate to this idea, in part, because they’ve been raised in it, Swift serves as a healthy antidote to such outlooks. For Swift, such statements and beliefs reflected the pride of fallen men. And pride, as Mr. Stubbs repeatedly shows, was one thing that Swift always set in his sight to critique.

The grandest individual whom Swift cut down to size, or humbled, was the Duke of Marlborough. Marlborough, the famed general and father of the Churchill dynasty, was the principal target of Swift’s criticism when he worked in London for a pro-Tory paper, the Examiner. The politics behind the attacks on Marlborough are detailed; ever the stout Whig, Marlborough’s public acclaim and popularity for his battlefield exploits made him a serious rival to Tory political and societal plans. Thus, Swift was employed to show the darker, more ambitious, side of the famed English general and succeeded in knocking him off his high pedestal.

The life that Swift lived was filled with opportune chances. His first major break was becoming the secretary to Sir William Temple. Temple provided Swift with a relatively stable early life and allowed him to pursue his writing interests. Through Temple, Swift also had an invaluable high society contact which brought him into a network of high society connections giving him access to the inner workings of English politics and high society. Middle-aged, he became a fixture of London society and politics through his political contacts. He was utilized by Whigs then courted by Tories. This gave him a keen sense of how parliamentary politics worked; it suffices to say that Swift was unimpressed by party politics and included the silliness of petty politics in the political intrigues and laws of Lilliput.

Through Swift’s fortunate chances and contacts, we see the many faces and personalities that Swift intertwined with. We also learn how many of the personalities and persons he met became the basis of his literary characters and poetic writings. St. George Ash, a prominent Irish philosopher and natural scientist, and his scientific study, became the basis for the scientists of Laputa and the Academy of Lagado. Stella Temple, the fair young daughter of William Temple, served as a template for the kind-hearted Brobdingnagian Glumdalclitch. The Reverend William Tisdall, who was later a suitor for Esther Johnson, struck Swift as a giant “Brobdingnagian” person unable to see his own defects.

Swift’s soulful relationships with Esther Johnson and Esther Vanhomrigh are possibly the closest incarnate human relationships to Platonic love in literary history; Swift, here, certainly stands apart from later romantic writers who fell into a lust for the female flesh on their travels. Mr. Stubbs goes into excruciating detail about his courtship, if you will, of both, and how he secured their moving to Ireland while avoiding the backwater rumors of an illicit romance (which constantly plagued him). Swift’s earlier attempts at marriage must have truly soured his views on marriage as Mr. Stubbs suggests.

Beyond the high-flying novels and pamphlets which he is most famous for, Mr. Stubbs’ biography reminds us that Swift was also a man of letters and poetry. And since the many people whom Swift met in life, corresponded with, and grew affectionately fond of, served as the models for his poetry, this allows us to see the human faces connected to Swift’s poetry. Tying together Swift’s many letters with the ups and downs of his life permit us to see a human Swift behind the often crass and crude rhetoric he wrote with. Far from a cold and indifferent person, as his letters can initially appear, he was a man with a mission to humble those who he deemed too hubristic with his literary style. God only knows if it succeeded as Swift intended.

In the end, however, Mr. Stubbs’ Swift is a man of his times. Swift’s writings were not just the product of individual genius but equally—if not overwhelmingly—the product of the zeitgeist he lived in. After reading Jonathan Swift: The Reluctant Rebel one gets the impression that the literary accomplishments of Jonathan Swift would not have been possible if not for the turmoil that Swift lived through and the travels that Swift embarked on. Subtly,  Mr. Stubbs’ biography humbles the individual greatness of Swift. Nevertheless, the work is an exciting read through the life and times of Europe’s “most notorious writer.”

Jonathan Swift: The Reluctant Rebel brings a human face to one of the world’s greatest satirists. Whether the portrait endears us to Swift or repels us like the sight of a Brobdingnagian depends on the reader. I, for one, have only grown to love Swift more after reading a lengthy but exhilarating one-volume biography of a man who truly became a paradoxical reluctant rebel. Perhaps it is best left to Mr. Stubbs to close his thoughts on Swift:

“Much as he relished the fray, Swift would always deny that he had turned renegade. The degenerates who had taken over government, Parliament, the Crown–it was they who had left him no option but resistance. This was Swift’s line of argument; and this, as well he knew, was the reasoning of a rebel, however reluctant.”

This was originally published with the same title in The Imaginative Conservative on January 6, 2019.