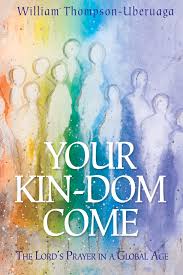 The purpose of this book, William Thompson-Uberuaga tells us at the beginning, is the recovery of the “one heart” that unites what Pope John Paul II called the “two lungs” — the Eastern and Western Christian traditions— of the one universal Christian community.  In seeking this one heart, the author’s central concern throughout this deep and discerning study of the Lord’s Prayer is a quest for the truly universal, in the sense in which Eric Voegelin used that term when he distinguished between the ecumenical as world-wide and the universal as both common and world-transcending.  “The truly universal,” says Thompson-Uberuaga, “would seem to be an eschatological reality, something toward which we move and in which we participate, but never fully accomplish, at least this side of the full eschaton (or end).”  Prayer, he suggests, and especially this particular, “paradigmatic” prayer is best understood as a movement toward that transcendent, all-inclusive universality.  For this reason, he not only extends his discussion of the Lord’s Prayer to its Jewish roots in addition to its Western and Eastern Christian unfoldings but also suggests that all the world religions and even “prophetic agnosticism and atheism” can be seen as embraced within the movement of self-emptying, kenotic openness that the Lord’s Prayer leads us towards and ultimately into.

As Voegelin discussed the term in The Ecumenic Age, the “ecumenic” was a field of power, whereas world-transcending universality involved a radical openness that was the opposite of any grasping at power.  St. Maximus the Confessor, whom Thompson-Uberuaga cites and refers to in various places, once analyzed human evil as a movement beginning from agnoia theou (ignorance of the God who is self-transcending love) then moving in a trajectory through philautia (egoistic self-love) toward culmination in turannis (tyranny), the lust for power that seeks domination over one’s neighbor and ultimately all reality.  It is to avoid the associations with power that inhere for the modern reader in the word “kingdom” that Thompson-Uberuaga both playfully and seriously changed it in his title to “kin-dom,”   “One could also use ‘reign’ in place of ‘kingdom,’” he says, “but ‘kin-dom’ or ‘kindom’ seems wide enough to embrace our whole family, human and all animates.”

As that reference to “all animates” indicates, Thompson-Uberuaga’s conception both of the implications of the Lord’s Prayer and of the Christ who gave us the prayer is cosmic: “in that Spirit, who is one with Jesus Christ, all creatures are participating in Jesus too, in ways that are too profound for most of us to understand.”  The “divine-human drama” that constitutes our life in the field of primary experience, he says, “is not only between God and humans, but between God, humans, societies, histories, and the entire cosmos.”  Hence, he says, the Lord’s Prayer bears within it a vast “surplus of meaning,” that makes it open to unending possibilities of interpretation as readers in every age and every culture bring their own traditions and experience to it, so that “…as text and receiver interact—dialogue, if you will—depths of the divine-human drama may emerge that had remained unseen before, or less well seen.”

Thompson-Uberuaga’s discussion of the Lord’s Prayer in this book is a deeply learned, spiritually sensitive, and generous-spirited invitation to probe the depths of this central document of our civilization and let it open us to the mystery it points to.

Eugene Webb is Professor Emeritus in the Henry M. Jackson School of International Studies at the University of Washington where he organized and headed programs in both Comparative Religion and European Studies. He is the author of eight books, including most recently Worldview and Mind (Missouri, 2009) and In Search of the Triune God (Missouri, 2014).

The Antinomies of Dostoevsky’s Political Thought

The Sophists and Socrates: A Complex Relation