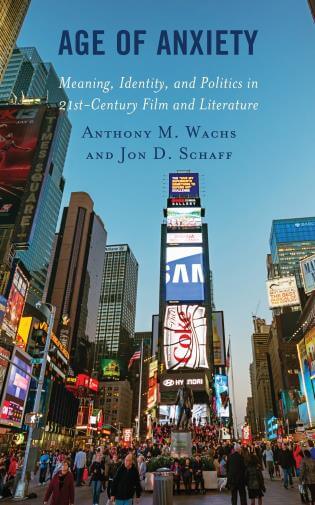 The worst one can say about a book of ideas is that it elicits neither strong agreement nor passionate dissent. Fortunately, Age of Anxiety: Meaning, Identity, and Politics in 21st-Century Film and Literature by Professors Anthony M. Wachs and Jon D. Schaff has the distinction of having stimulated both in this reader. That is, even though it frequently made me wish to rebut its conclusions, I considered it an engaging and provocative text, which offers both an impassioned defense of (and encouragement towards) traditional Western values as well as an at-times myopic dismissal of other possibilities for cultural evolution and personal growth. As such, the book should prove a potent and illuminating guide to living for some, while a frustrating attack on the hope for a more “transcendent multiculturalism” to others.

Coming from a background in literary studies (with a deep interest in comparative religion), I was interested by the premise of this book from the start. A professor of political science (Schaff) and one of communication, rhetoric, and ethics (Wachs) applying their disciplinary lenses to recent pop culture narratives (with an emphasis on dystopian fiction and spiritual allegory) sounded right up my alley. This was not quite the approach that I discovered within its pages, however. In their analysis of the existential condition of our age through the prism of modern myths, the authors drew far more from the Western intellectual canon than from the present states of their fields. Classical, Christian, and Enlightenment-era thinkers ranging from Aristotle and Aquinas, to Descartes, Locke, Hobbes, Rousseau and de Tocqueville are brought into conversation. The authors likewise use their interpretations of the literary and cinematic narratives to challenge these thinkers back, especially the Enlightenment forefathers of classic liberalism, in whose focus on the maximization of individual autonomy and material comfort the authors trace the roots of modern day consumerism and the abandonment of Thomist Realism and Aristotelian Virtue Ethics.

I enjoyed this traditionalist bent despite my initial expectations; the dialogic approach between old and new was engaging, and reading the book frequently felt like sitting in on a world-class seminar. Their critiques of rampant individualism are particularly convincing, and the two authors prove effective diagnosticians in identifying many other legitimate symptoms of spiritual malaise and dehumanization that the disenchanted post-Enlightenment world has brought us. Yet I found that the authors – having identified many serious social ills – trace them ubiquitously from obvious instances to questionable ones like a contagion, portraying a total cultural wasteland bereft of spiritual values, purpose or hope.

In this regard, the book disappointed me with its anxiety-provoking hyperbole and the limited scope of its prescriptions for change – both collective and personal. At its worst, the book comes off as a crotchety lament about “the good old days,” yearning for a return to “cozy” Medieval hierarchy and nostalgic for a time when the Western canon wasn’t being encroached upon by content from other cultures. Meanwhile, though professing to be above the political fray, the book is replete with noble-sounding defenses of classic conservative values, while habitually caricaturing, negating, or downright ignoring progressive principles. Conviction is praised again and again as a virtue – but whose conviction, rejoins the hypothetical social activist reading it.

Nonetheless, chapter topics are quite creative, if at times repetitious in message. From eulogizing the loss of social cohesion in the breakdown of aristocratic values in the BBC show Downton Abbey, to exploring the importance of self-sufficiency and the preservation of local cultures by way of the Pixar animation, Wall-E, to extolling the value of defined social roles and personal craft and patience in JRR Tolkien’s Lord of the Rings, there is a familiar message running through the book’s pages that seemed reductive to me (though certainly valid for many): traditional European values served us better in many ways. We can’t go back in time… but perhaps we can create bubbles for ourselves where we can feel happier, as if we have…

Each chapter also brings at least one major contemporary thinker’s views into conversation with the classic thinkers and popular books and films, with cultural critics like Allan Bloom, Charles Taylor, Alasdair MacIntyre, Wendell Berry, and Matthew Crawford all making cameos to offer their thoughts about the ‘Age of Anxiety.’ Unfortunately, even as the book directly (and often accurately) questions runaway technocracy, superficiality in culture, the deterioration of civil discourse, and the excesses of political correctness and identity politics, it also comes close to engaging in the politics of grievance and victimization itself, in Christian identity politics.

A quaint conservatism is preached throughout, emphasizing localism, community, faith, and personal responsibility… and as a guide to finding individual contentment in an age of chaos and division, there is much to inspire readers looking for answers in their lives. Yet it is ironic that the authors are promoting an individual retreat into the wholesomeness of “Hobbit shire living” (as they metaphorically put it) and away from addressing the ethical crises of modernity – all while claiming that individualism is at the root of many of those crises. This felt contradictory and unsatisfying. While Schaff and Wachs are busy communicating the beauty of the Western ethical tradition, they refuse to acknowledge its more radical moral implications/applications, by refusing to place Realism and Virtue Ethics in the realpolitik of this moment in a courageous way – ignoring the moral urgency of income inequality, rising ethnonationalism, and climate change and instead arguing that the most substantial problems today stem from material excess and affluence. Instead of urging collective consensus towards reparative justice, they encourage an individual retreat from complex challenges into cul-de-sacs of monoculture, away from the tumult of these times. Perhaps they’ve forgotten that in the novel version of the Lord of the Rings, the forces of Sauron eventually reach the Shire too, and that even hobbits must abandon their hobbit holes and fight for justice in the face of darkness now and again.

Most telling of all, perhaps, is in Chapter 6: “Faith Worth Fighting For” when the authors demonstrate what they do believe in fighting for: religious iconography, a material totem of their own faith. Here, the authors lambast a European priest character from the Martin Scorsese movie Silence for desecrating a symbol of his religion to save innocent Japanese lives.  Since Father Rodrigues – who is actively and agonizingly striving to do the righteous thing – chooses to step on a cross rather than allow his fellow human beings to be murdered before him, the authors condemn his character as faithless and weak, acting out of ego. “He is more like Judas because… he kills his essential self, that of a faithful priest (165).” I found this conclusion deeply disturbing, revealing the authors to be so convinced of their own hierarchy of values that they cannot even empathize with the difficulty of the choice forced upon the priest by her persecutors. They fail to realize, perhaps, that anxiety isn’t only generated by a lack of certainty in our complicated world, but by a refusal to wrestle with uncertainty, by clinging to convictions that may no longer protect the innocent.

In the end, sadly, I found that the book undermines the beauty of its wholesome moral agenda by ignoring real-world problems and presenting the Christian West as being under overwhelming siege within a Thunderdome of multicultural chaos and meaninglessness. Every symptom of malaise-in-thought and cowardice-in-conviction addressed seems to be echoed by the authors’ own unwillingness to wrestle with the principles and values of others and empathize with alternative sources of suffering and conviction. Instead they resort to comforting reactionary bromides, urging a retreat into self-sufficiency and stoicism… a guide for building one’s very own shelter from the storm.

Reading it was a soothing reminder of simpler, more socially stable and civilized times as well as an anxiety provoking challenge to some of my own convictions. In this way, it was a challenging read; but I appreciated that. Sometimes we need a shakeup to our convictions to test them, to see if they’re still ‘worth fighting for’ or not – and this book got me willing to speak up for and defend some of what I hold to be morally important. And there’s nothing wrong with a challenge to one’s convictions after all, if you’re open-minded. I only wish that the authors of Age of Anxiety had been a little more so themselves.

Benjamin Friedman is a published creative writer, performing poet, and award-winning screenwriter who graduated from the University of Pennsylvania with honors and a degree in English and Cinema Studies. He has also worked in environments as disparate as the American Museum of Natural History, a New Jersey senator's office, an organic permaculture farm, a treatment center for low-income patients with cognitive disabilities, a yoga and spirituality retreat center, and a Manhattan marketing agency -- all while pursuing his own independent studies in philosophy, history, psychology, and religion.