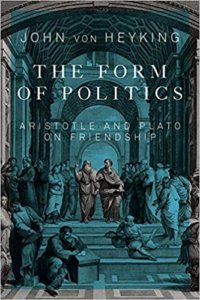 In The Form of Politics, John von Heyking directs his readers to the critical importance of friendship in the political thought of Aristotle and Plato. The title nicely captures the key finding of the book: true friendship between individuals was thought by Aristotle and Plato to provide an analog for the harmony that might be achieved in a political community. Von Heyking skillfully shows that both ancient philosophers knew true friendship was not the same as political friendship but saw civic concord as a key object of politics. It is a wonderful book on ancient political thought and one needed for these factious times. Von Heyking returns to these ancient thinkers to remind his readers that statesmen need to start thinking about the friendship of the political community again. It is here that several questions and concerns come to mind, given the things that von Heyking has said in the book, most notably, whether it still makes sense to talk about like-mindedness among a modern people who view themselves solely as individuals and whether whatever concordance achieved among such people would still bear any resemblance to true friendship.

Von Heyking makes the interesting ahistorical choice to begin with Aristotle and then proceed to Plato. Aristotle is described as being more down to earth and commonsensical while Plato moves beyond the polis to the transcendent realm. Thus, von Heyking follows the Aristotelian procedure of moving from the things that are first to us to the things that are first in themselves. Most people understand friendships of utility because they know what networking is and they understand friendships of pleasure such as the ones we share with drinking buddies. But it is in its purest form that one really begins to understand what friendship is, a shared vision of the good (sunaisthesis). Von Heyking says, “Sunaisthesis forms the crown of Aristotle’s teaching about friendship because it expresses friends’ common activity in perception and thought. In sunaisthesis, friends behold one another and themselves, beholding the good. They are fully conscious of themselves, as individuals, their ‘other selves’ and the good that informs their activity” (46). True friendship turns out to be loving another person because both of you love and contemplate the good. Here is where the analogy to political friendship comes in: political communities have a shared commitment to deliberate together about what is just and advantageous and attempt to bring that order about. In essence, political friendship is a usually unmentioned pledge among citizens to search together for the common good that forms the bonds of civil discourse.

Von Heyking reminds his readers of Aristotle’s saying in the Nicomachean Ethics that “friendship seems to hold cities together, and lawmakers seem to take it more seriously than justice” (NE 1155a23). This is understood as describing statesmen paying attention to the need for a context of friendship in order to have deliberation. Beautifully, von Heyking shows that Aristotle understood that context to be produced by the shared stories of tragedies. Von Heyking says, “the Poetics teaches spectator-citizens the habits of living their lives as a story, and these habits enable them to share in sunaisthetic friendship. They not only “apply” what they have practiced at the theater, they conduct their moral and political lives poetically” (86). Today, individuals self-select which stories they consume, including the news, leaving few shared narratives. The author seems rightly concerned about the possibility of the poetic arts developing a context for political friendship today saying, “yet the fact remains that contemporary democratic ideology, driven by technological ambition, prizes the global over the local, and tries to convince us that the digital age enhances our humanity and our possibilities for connection. The result is that political friendship needs to be contrived more and more in order to preserve solidarity within a given space. Communities increasingly rely on propaganda to create stories to maintain these imagined communities” (92). Von Heyking wisely reminds us that the history and stories of a people bind them to one another and to some degree define who they are as a people. While admitting no one seems to want to be bound to a place or to be defined, they seek out virtual communities and try to leave their bodies behind.

There is a gap between Plato and Aristotle on friendship that von Heyking acknowledges but does not speak to enough—and that is that Aristotle at the start of the Politics Book II seems to view friendship as more of a private good than a public one. There Aristotle seems to take Plato’s Republic as a set of actual policy recommendations and highlights the problems of having everything in common, including wives and children. Von Heyking views Plato’s Laws as the true statement of Plato’s politics, but he should address the issue of there being a tension between true friendship of individuals and political friendship.

Following von Heyking’s argument that the essence of true friendship is beholding the Good together—one gets the impression that true friendship involves a lot of agreement about what constitutes the good life. Do true friends have to agree about morality and religion? And if they do, what does this mean for political friendship in a society that disagrees about these things? For example, there is something jarring about reading this paragraph from the Federalist Papers today: “with equal pleasure I have as often taken notice that Providence has been pleased to give this one connected country to one united people–a people descended from the same ancestors, speaking the same language, professing the same religion, attached to the same principles of government, very similar in their manners and customs, and who, by their joint counsels, arms, and efforts, fighting side by side throughout a long and bloody war, have nobly established general liberty and independence” (Federalist 2). In sum, von Heyking’s description of political friendship does not seem too far from what was called at the time of the American framing republicanism. But there was concern at the adoption of the US Constitution that the United States would be too big and too diverse to achieve republicanism.

While von Heyking’s book is not about the United States of America or his own country of Canada—he does see in the City of Calgary an answer to the tension between plurality and political friendship. Calgary has a festival where they celebrate their history that is broad enough to assimilate newcomers. Von Heyking describes this event: “In celebrating the cowboy, the Calgary Stampede celebrates the humble and stoic virtues of the cowboy and his work…The festival is also a synthesis of free play and compulsion. It is expected that participants will dress in western wear however gaudy. Indeed, I always find it marvelous when I see Canadians of non-European descent dressed up in cowboy wear” (203). Anyone who accepts the cowboy ethic of hard work and risk-taking is a Calgarian, much like Abraham Lincoln maintained that those who could accept the teachings of the Declaration of Independence had the right to claim to be Americans as much as if “they were blood of the blood and flesh of the flesh.” Von Heyking clearly shows that political friendship can be thin, but it has to have some substance.

Reading The Form of Politics one learns a great deal about what two great ancient thinkers found vital about friendship and politics. One also thinks about what has been lost in the move to modern politics. If the only purpose of government is the protection of individual rights or the guarantee of a standard of living to allow for individual autonomy, can we still be friends? Aristotle reminds his readers that the political community does not just exist for living but for living well, and von Heyking illustrates that we might not be able to achieve any sorts of political goods without public deliberation in the context of friendship.

Please also see Joshua Bowman’s “Friendship and ‘Filthy’ Politics in Plato and Aristotle,” Carol Cooper’s “Contemplating Friendship,” James Greenaway’s “The Form of Politics as Friendship,” and John von Heyking’s “’The Delicate Shimmer of Interlaced Rainbows’: Sunaisthesis, Homophrosyne, and a Reply to My Friends.”

Rodolfo Hernandez is an Associate Editor of VoegelinView and a Lecturer in Political Science at Texas State University.

Concerning Conservatories I: The Appeal of Entrepreneurship
Oblivion and History
Liberal Education and Politics: The Case of The Tempest
Lost in Thought: The Value of Aristotle’s Contemplative Life