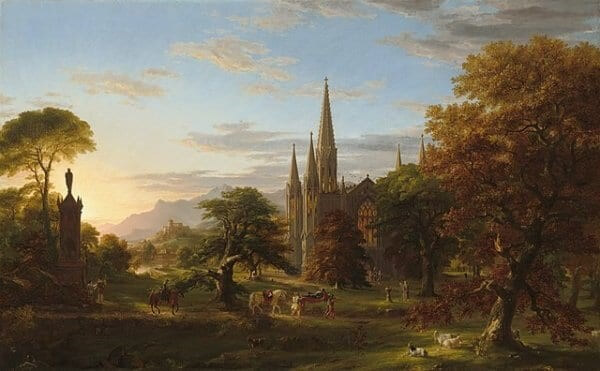 Knowledge, while hard to define, must have a connection with truth. Some truths are accessible only to a normally thinking, feeling, person. The truth of reciprocity is recognized, in practice, by everyone other than, presumably, some psychopaths. “In practice” because while some thinkers might imagine that reciprocity is merely a convention, or that we are “hard-wired” by evolution to merely think it is true, in practice everyone acts as though it were true – and actions are a better indication of actual beliefs than words.

Likewise, all human beings recognize the existence of beautiful things, the most beautiful things being qualities of soul, life, and action. So, is beauty objective or subjective? It is neither, as those words are usually understood. The word “objective” can usually be regarded as synonymous with “measurable” and “true; the way things are regardless of perception.” By contrast, “subjective” is often regarded as that which is illusory and not real.

But the word “subjective” can also be used as a name for all interiority; every thought, feeling, and intuition. It is the realm of humor, metaphor, poetry, sense of the divine, imagination, as well as logic and rationality. The subjective is fundamentally spiritual and it has priority over the world of objects. The world of objects, and “objective” knowledge, is parasitic on the feeling, thinking, perceiving, person. An object is a kind of dead, inanimate thing, trapped in deterministic processes. The subjective is noumenal and is where the numinous resides, while the objective is realm of the phenomenal.

The Jewish philosopher Martin Buber distinguished between I/It and I/Thou. I/It is subject meets object. I/Thou is subject meets subject; my interior meets your interior. The face and eyes, while being strictly objective and phenomenal, then become signs and symbols of someone’s interior life. All living things have this interior aspect of purposes, intentions, and desires. The products of the human imagination; art, music, architecture, scientific theories, are symbols of a spiritual reality, pointing to the interior life of their creators. As Berdyaev writes evocatively, the primordial flame of life exists primarily in the subjective, while it is cooled down and hardened in objectivized being.[1] Ugly art, music, and architecture, then says something negative about the people who made them and have almost nothing to do with the primordial flame of life. 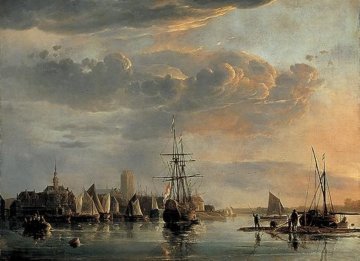 Beauty, as opposed to mere prettiness, has a connection with truth and goodness. A pretty face unillumined by an interior goodness is not beautiful. Beauty means a communion with the divine world, though it is created and revealed in a world of darkness.[2] To perceive beauty requires a creative act on the part of the perceiver. It is possible to travel through what should be a beautiful landscape and to remain unmoved and blind to beauty. There should be a sense of exaltation, but oftentimes we are just not in the right frame of mind.

What is objective is often defined as accessible to third party observation, meaning that it is not reliant at all on human subjectivity. This idea is incoherent since “observation” requires the subjective reality of the observer. Objectivity in this sense could perhaps then be defined as aspects of experience relatively invariant between observers. Two people both meet a third person. They agree on what the third person looked like, roughly, but might have quite different reactions to the third person’s interior qualities.

Beauty is not objective in the sense of being invariant between observers. It is not measurable. It is subjective in the sense of being related to a feeling, thinking, experiencing self, and a self that is creatively up to the task of communing with the divine. Being bored or tired is going to interfere with this. For something to be beautiful something must be evoked in the subject. In this sense “beauty is in the eye of the beholder.” But, crucially, this is not the same as saying that beauty is a mere nothing and is whatever someone says it is. The beauty of the Kingdom of God does not come and go, but the ability to commune with this kingdom differs between people, and the same person at different times. If beauty gets divorced from truth and goodness, it becomes a fraudulent imposter – truth and goodness also being properties of the Kingdom of God.

Appealingly, Berdyaev describes beauty as a memory of a lost paradise, or a prophecy of a transfiguration of the world. The ancient Greeks imagined a golden age in the past, which could be thought of as a memory of spiritual realities that precede birth, and the Jews and Christians have a messianic vision of a paradise in the future. Both can be dangerously misinterpreted for human regimes in a fallen world – one being strictly reactionary, and the other an attempt to impose a utopian vision that creates more misery than it remedies. But both embody the intuition that the divine is both our place of birth and our destination; it is our true home. 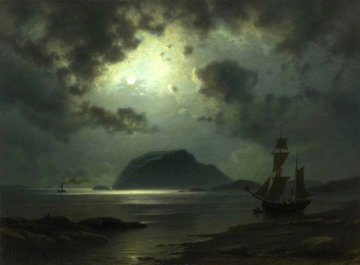 In training people to appreciate beauty, people are being kept alive to spiritual realities and to the noumenal, and numinous, aspects of life. This training will include the discipline to listen to a long symphony, or read a difficult but profound book. The connection with truth and goodness prevents aesthetic decadence and the danger of finding evil things beautiful. Aestheticism is not related to creativity or the spiritual, and thus, not with real beauty either. Finding truth and goodness beautiful is what drives the pursuit of them, making beauty paramount.

Berdyaev distinguishes between the classical and romantic elements of art. The classical component is finite perfection as represented by ancient Greek sculpture, the Apollonian. The romantic aspect of art is something which opens into the infinite, the Dionysian, such as beautiful music. Great art combines both. Finite perfection by itself is a kind of oxymoron, perfection being a property of the eternal spiritual, and infinity by itself connotes total unbounded chaos. 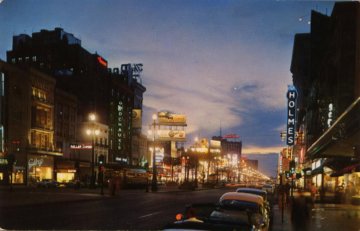 Aesthetic subjectivism, in the sense of beauty as being something illusory and as a trivial statement of transitory feelings is false. Searching for beauty should be a key human motivation and getting distracted by fake beauty could have tragic results.

False subjectivism is coextensive with aesthetic and moral nihilism. Nihilism means that beauty and morality do not really exist. If nihilism were true, the statement “that is beautiful” would be neither true nor false, but meaningless. Aesthetic judgments would then be tantamount to a burp; something humans do of no particular significance with no implications other than that someone has swallowed some air. If that were true, perhaps aesthetic judgments would be something for which we should apologize. “Excuse me, I just had an experience of beauty. It must be something I ate.” In a similar fashion, “emotivism” promoted by the logical positivism reduces moral statements to simply like or to dislike: “yum” or “yuck;” devoid of content.

Aesthetic realism, however, is the notion that beauty can potentially be perceived by all who have eyes to see, ears to hear, and a heart to feel. Beauty is most importantly a property of invisible things such as the human soul. Aesthetic realism implies that aesthetic knowledge is likely to exist.

Aesthetic realism probably entails that there is a hierarchy of beauty; just as there is a hierarchy of wealth, height and moral goodness. This hierarchy flies in the face of the modern preference for egalitarianism which prefers to imagine that people are equal in some nebulous fashion and that there is no accounting for taste. Egalitarianism is presented as though it were an ideal, but in fact it too is nihilistic. A universe that lacked moral goodness or beauty would by definition be an ugly, amoral hellhole. That is a steep price to pay for honoring mere “cannot be wrong” opinions.

Plato points out that everyone has the ability to contrast particular beautiful things with perfect beauty. Since perfect beauty is never actually experienced on Earth, but people nonetheless use it as a standard by which to judge things, it seems knowledge of beauty is innate. For Plato, the human soul is eternal and has perceived the perfect Form of beauty which exists in complete perfection in a timeless realm. For him, beautiful things on earth are reminders of perfect heavenly beauty, so aesthetic knowledge constitutes an anamnesis – a remembering of spiritual creatures.[3] This fits the “golden age” thinking of other ancient Greeks where beauty has ties with a spiritual past, though also implying future-oriented communion.

To appreciate beauty, it may be necessary that head and heart work in concert – though a cold, merely intellectual acknowledgement of objective comeliness is possible. In that case, one does not fully know it. Many philosophers have complained that it is clearly false when Plato writes “to know the good is to do the good.”[4] Since Plato was no fool, a more charitable interpretation is required. Plato seems to be claiming that really to know something requires knowing something emotionally as well; to know something fully involves truly believing it. In that case, what is true of knowing beauty is true of knowing anything else. Other instances of merely partial knowledge might be knowing that one’s child is dead, but not really believing it yet. Or knowing that the connection between money and happiness quickly diverges once a certain fairly limited amount of wealth is acquired, but still fantasizing about winning the lottery.

On this view, Truth is not the way things are irrespective of our thoughts about something – unless we restrict ourselves to the Kingdom of God. Truth and Beauty are visitors from another world. Only the thinking, feeling, willing subject who is, perhaps momentarily, up to the task can creatively bring them into being in this fallen world. Just as the true spirit of friendship ebbs and flows. Love on this plane – as communion with God and others – infiltrates the human heart sporadically and imperfectly. The absence of Truth, Love, and Beauty, means loss and alienation which is intrinsic to the phenomenal world of objects. Truth as objective knowledge would be truth about objects which is far afield from wisdom.

[3] Anamnesis means recollection, but it is particularly associated with Plato and his notion that we remember things from our past lives – specifically, that though we have forgotten Platonic Forms in the process of being reborn, passing through the River of Lethe, meaning “forgetfulness”, we can still be reminded of the Forms we once knew by our experiences on Earth. He most famously develops the notion in the Meno in the example of the slave boy who can be shown to remember mathematics though having no formal education in the subject.

You Will Read a Dark Stranger: How We Read Today and Yesterday

Procrastination: Not To Worry, I Still Have Six Days