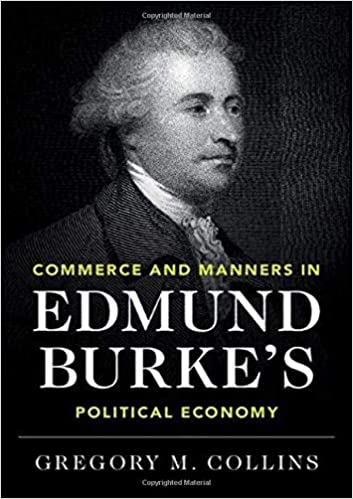 It can only be fortunate for us and the future of our field as political theorists or historians of political thought if Edmund Burke continues to be relevant and the various facets of his thought studied by scholars and interested readers alike. The Irish statesman is once again the center of an extensive, worthwhile study; this time as it concerns his writings on political economy. Gregory M. Collins, postdoctoral associate and lecturer in Yale’s Program on Ethics, Politics, and Economics makes the relevance of Burke’s oft-ignored economic thought clear. It presents Burke’s political/philosophical thought, but with the indispensable anchor of the pressing economic issues of his time. Discovering Burke’s economic thought, moreover, supports his reputation as a thinker whose views were hardly rigid or absolute in political manners and it demonstrates the traits of a man keenly attuned to his place and time and the circumstances of his constituents.

Reading Burke’s most famous works alone is enough to understand that Burke was no dogmatic thinker—so why might it be helpful to elucidate on his economic thought? Besides the fact that Burke took a serious interest in the economic affairs of his day, it is helpful to place Burke besides his contemporaries, Adam Smith and David Hume—the former of which likely influenced Burke since he owned a copy of The Wealth of Nations—during a time when markets were revolutionizing Great Britain. After all, how can one neglect the impact of one of the most remarkable advents of the 18th century on a perspicacious mind such as Burke’s?

Collins recognizes that Burke’s interests, expertise, and education hardly qualify him as an economist (31); yet, the profession hardly existed during Burke’s time and one does not need the full-time title of economist to make important comments about commerce or markets.  Collins teaches us, for example, that Burke maintained a consistent engagement—both theoretical and practical—with matters related to political economy. He was a writer of commercial affairs, a legislator in parliament, and a farmer, proving that his interest in economic matters was serious and relevant to his daily affairs as it pertained to agricultural policy, labor, and even wealth distribution (32).

Burke’s political economy, Collins, argues, warrants serious attention because it provides “a distinctive approach to the study of economics that blended considerations of morality, religion, and empire into its examination of modern commercial phenomena” (3). What’s more, “by taking into serious account Burke’s political economy, we can broaden our comprehension of the strengths and limitations of market liberty and become more aware of the possibilities of integrating the pursuit of profit with the ethical preconditions of freedom” (16). Here, we see one of the most important arguments of the book as it extends beyond Burke scholarship for the sake of Burke scholarship.

Collins, after all, is confident that Burke’s economic thought provides a “mediating path forward” for modern commercial society, as a balance between “excessive government intervention and individualism that retain the fruits of private market exchange while protecting against its baser effects” (16). Collins presents an impressive and convincing array of sources to support his argument with regards to Burke being a pro-market thinker. Equally important for Collins, however, is establishing the connection between Burke’s pro-market thought and his philosophical writings or, as Collins puts it, the notions of “liberty and virtue” (16).

The relationship between economics and morals is certainly important, and Burke is a worthy thinker through which to probe the topic. There is, perhaps, a methodological question about the choice to explore and ascribe thoughts on political economy to a figure who did not directly write out his views as an overarching theory of economics, but only answered and wrote thoughts on particular questions about particular policies. What does it mean to map out Burke’s political economy? More importantly, what is this act meant to do, either for Burke’s own intellectual reputation or for the forms of markets that Burke defends?

For Collins, Burke’s political economy provides the “philosophic maturity” needed to establish the ethical and cultural foundations of commercial prosperity (4). He places manners and ethics, moreover, as a “precondition” for both commerce and the Scottish Enlightenment (487). The majority of the book’s premise is substantiated with references to Burke’s Thoughts and Details on Scarcity since, Collins argues, it “offers the sturdiest philosophical foundation among all of Burke’s writings and speeches for his defense of market liberty” (143). Collins places his work within an array of Burke scholarship that appears to have neglected his economic thought, writing that scholars such as C. B. Macpherson and J. G. A. Pocock “both understate the novelty of the efforts Burke undertook to facilitate economic reform in his age” (145).

In order to establish the importance of his inquiry, Collins asks relevant questions, such as whether Burke reflected upon commercial matters with enough rigor to ascribe economic theory to his thought. To this question, he introduces archival research, such as writings in Burke’s library that discusses commerce and trade. Burke’s own political writings, when compared to his economic writings present a similar problem to that known as “Das Adam Smith Problem,” coined by German intellectuals who were trying to make sense of Smith’s seemingly disparate works, The Theory of Moral Sentiments and The Wealth of Nations. Might there be a similar “Das Edmund Burke problem,” Collins asks, given Burke’s traditionalist persuasions in his Reflections and his support for market economies in Thoughts and Details? To assess the plausibility of this claim, Collins sets out to explore Burke’s conception of political economy, so as to illuminate “his understanding of the relationship between commerce and manners” (3).

Burke wrote Thought and Details on Scarcity five years after his Reflections on the Revolution in France, but it is still possible to see in the former work the commonalities of the principles put forth in his famous indictment of the French Revolution. Collins sees in Burke’s economic writings a “commitment to the inviolability of property” and the “belief that the natural order sanctioned the free diffusion of commerce.” Burke’s philosophical approach in both works is also similar: his distrust of the abstract reason that tainted French philosophes is influenced by the same form of rationalism through which he analyzes questions pertaining to political economy. By elucidating the meaning of Burke’s writings in Thoughts and Details, then, Collins is not detracting from Burke’s points in the Reflections, only adding another dimension that comprises his thoughts on economic matters.

Perhaps we can consider Collin’s impressive research on Burke’s political economy a much-needed qualification to Burke as the “godfather” of modern conservatism. Unburdening the statesman from the number of political labels that are attached to him is the first task that Collins takes up to corroborate the complexity of Burke’s ideas. His thought escapes strict categorization, since an important portion of it—the economic—can hardly be described, as it is often said of Burke, as conservative: “How then, could the thinker who wrote the Reflections, considered the authoritative Western Defense of cultural traditionalism in modernity,” he asks, “also compose a tract called Thoughts and Details, in which the same writer provided steadfast support for Enlightenment, market-based principles that were perceived by contemporaries as a threatening force to settled social conventions?” (3) Burke’s economic thought—if one must give it a title—is more liberal than conservative.

How these liberal economic views fit within Burke’s wider thought is a challenge that Collins takes up quite well. He writes that “a full appreciation of Burke’s critique of the French Revolution requires not simply recognition of his searing attack on abstract reason and the destruction of French tradition. It calls for acute attention to his economic argument,” since “his economic critique is not just an economic critique, it was inextricably linked with larger questions of politics, morality and history” (516). He later writes: “If, indeed, Burke, is the godfather of conservatism, his recurrent support for market enterprise suggests harmonious cooperation between his intellectual and political heritage and commercial freedom” (532).

To be sure, it matters little (in my view) whether Burke be described explicitly as a conservative or classical liberal thinker, since it is better to just read him. The implied controversy between Burke as a conservative thinker and his pro-market writings, then, strikes me as less of an issue if we begin from his moral and philosophical writings to elucidate the rest—political or economic. After all, reading Burke without paying any mind to whether or not he was conservative is a better way for readers to draw the conclusion that his thought is as traditional as it is unique. Collins’ apparent effort to qualify Burke The Conservative, I fear, leaves the reader feeling even more encumbered with the task (one which I consider to be a non-issue) to decide what political label best fits him. Collins does, nonetheless, reject the possibility of a “Das Edmund Burke Problem” at the end, since Burke himself managed to harmoniously unite his (liberal) economic views with his (conservative) political and philosophical dispositions, through a common denominator: Burke’s judgement of individual reason as “more important to the swift intrusion of abstract rationality…” (516).

Treated as a historical study of Burke’s economic thought, Commerce and Manners will likely become a classic among Burke scholarship, and it deserves to take this place because of the rigor of Collin’s research but also the interest that people will likely take in his argument. The relationship between markets and morals is essential to discuss for our own times, and Burke’s writings that reflect his own time period and experiences serve as opportune point from which to compare our own conversations about this relationship to those that were taking place in the 18th century. Collin’s work, most importantly, successfully incorporates Burke into this conversation, thereby taking his rightful place alongside several of prominent thinkers of the Scottish Enlightenment. Even if Burke was not an economist, or even wholly involved in commercial affairs, Collins provides us with ample reason to trust Burke’s analyses and reflections on commerce. This effect warrants further appreciation, especially because of the message it imparts with regards to knowledge and specialization: the greatest thinkers, present and past, are not constrained by their formal careers and do not limit their search for knowledge to their own expertise; Burke testifies to the fact that a well-reasoning individual needs to be a Renaissance man of sorts, with serious interest in the various affairs that comprise everyday life so as to learn from them and shape his thoughts through them. This quality of Burke becomes all the more clear when we add his political economy to his intellectual legacy.

Nayeli L. Riano is an Associate Editor of VoegelinView and a freelance writer whose work focuses on the intersection of political philosophy and literature. She received her M.A. in Intellectual History at the University of St. Andrews and her B.A. in English at the University of Pennsylvania.