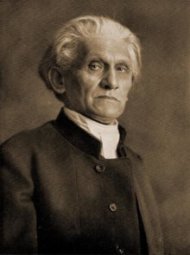 Late in life Eric Voegelin recorded that his own work on Plato was done “in the spirit” of the Plato scholars of the Stefan George circle. [1] Today I want to talk about George’s influence on the Plato scholarship of his own circle, and thereby his indirect contribution to Voegelin’s understanding of Plato. [2] The high point of George’s influence on Voegelin was in the early 1930’s, and I will confine my remarks to Voegelin’s works of that time.

In a 1930 lecture on Max Weber, Voegelin pointed out that due to Germany ‘s long history of religious and political strife, the nation had not achieved a unified view of the human being. [3] The situation, said Voegelin, is so bad, that in Germany “each individual must create a new world for himself.” Following the first mention of Weber as the individual who bears this spiritual isolation heroically, but does not rise above it, Voegelin notes: at this deep  point of spiritual decline “the creator of the new language arose in the person of Stefan George.” A few sentences later, Voegelin compares Weber and George.

What is the meaning of these three points? They refer to the basic issues of political community that Aristotle discussed under the term of “political friendship.” [4]  The common participation in the ground of being creates the harmony of mind that enables individuals to form community. Applied to the comparison between Weber and George: by virtue of Eros the charismatic individual inspires his companions to undertake the ascent to the idea of the good. Through joint participation in the spiritual center the correct super-ordination and subordination of the powers of the soul takes place that makes rational political action possible. Max Weber’s science does not reach this level of reflection, and therefore does not discuss the common faith out of which coordinated political action can flow. Voegelin speaks of Max Weber’s own faith as a private one that could “not be communicated.” [5]

The roots of public life in “political friendship” (philia politike) is the subject of Voegelin’s concluding remarks on George. Voegelin repeats what he said at the beginning of the lecture. The nationwide public forms that were achieved in the West are missing in Germany. In their place we find the “intrinsic German form” of political harmony in the “intimate education of friends.” Historically, this form of political community is found in the relationship between Herder and Goethe and in the circle of the Romantics. Today it is the George circle that embodies the intrinsic German form of “rule over men and service to men.” In German this last phrase reads: “Herrschaft über Menschen und Dienst am Menschen.” It is no accident that the phrase contains the title of the pamphlet written by Friedrich Wolters that describes the George circle: Herrschaft und Dienst, (“Rule and Service”).

In 1930 the comparison between Weber and George is clear: on the one hand, the isolated individual living in a private faith-therein lies the spiritual crisis; on the other hand, community constituted through participation in a common spiritual ground. In Voegelin’s Theory of Governance,  [6] written between 1930 and 1931, Wolters’ Herrschaft und Dienst, and thus Stefan George, become the focus of Voegelin’s study:

“The theory . . . developed by Wolters, based on the person of [Stefan] George and his circle, with George’s works and ideas serving as his model, is the most comprehensive of those we have examined: It offers an inventory of core problems that require little more than minor additions.” (340)

The core issues that Voegelin refers to are those we encountered in the Weber lecture: The human being’s openness to divinity which makes possible the moment of communion, and therefore communication, that is the foundation of political order. Adopting the term of the George circle, Voegelin speaks of “the spiritual deed” and “the divinely inspired life of the ruler” (340) whose Eros awakens his companions to undertake the ascent to the idea of the good.

The only work that Voegelin judges equal to Wolters’ is The Boke of the Governor by the 16th century Platonist Sir Thomas Elyot. What is the connection between Plato and Herrschaft und Dienst, “based on the person of [Stefan] George,” in which Plato is mentioned only once in passing?  In 1930 Kurt Hildebrandt, Plato scholar and member of the George circle, answered this question:

“Wolter’s Herrschaft und Dienst ‘brought to light the forgotten truth that it is the vocation of the poet to revivify a dead world and to found a new spiritual empire.’ Once this level of understanding was reached, it became possible to produce a series of works on Plato born of the new ethos.” [7]

To sum up his influence on Plato studies: George overcame the 19th century view that limited Plato to being the founder of modern science [in the US: the social sciences-Ed], and focused on Eros, the ascent to the divine ground, and the role of a small group in the attempt to spiritually renew society.

In a discussion of Kurt Hildebrandt’s 1932 book on Plato, Hans-Georg Gadamer commented on the importance of Stephan George’s pedagogical Eros:

“[Kurt] Hildebrandt’s own experience of the relationship of master to disciple and his participation in the educational influence of the poet on his younger friends, made it possible for him to rediscover much that is of central importance in the dialogs of Plato.” [8]

In 1951 Leo Strauss underlined George’s importance in the new interpretation of Plato. In a letter to Voegelin, obviously echoing a judgment that Voegelin had already uttered, he wrote: “You are entirely right: George understood more of Plato than Wilamowitz, Jaeger, and the entire guild.” [9]

Having established the decisive role of Stefan George in his own circle’s understanding of Plato, it will be useful to look at Voegelin’s two books on race published in 1933, in which the divine ground as the basis of political community and the role of Eros in the creation of a spiritual elite become explicit themes. Voegelin quotes Othmar Spann: “The spiritual history of archetypal humanity is primary religious history. It was Schelling who endeavored to explain race formation from this point of view.” [11]

According to Schelling a people does not come into being by living together and in engaging in trade. Prior to this a consciousness of community must exist. The myth itself constitutes the ground of being that unites individuals into political community. Voegelin credits Schelling with the insight into the “religious nature…of all community formation,” and adds that this methodological principle is “equally valid for the formation of community today.” [12]  Among Voegelin’s contemporaries it was George and his circle who shared Schelling’s insight. Friedrich Gundolf wrote in his book on George:

“One must first know the god, only then can one know the community and the people. Nations are created by the gods. From biblical times to Hoelderlin every sage has known this and therefore, at one and the same time, has called upon both god and the people.” [13]

Voegelin’s participation in the hopes of the George circle that the divine can be recovered and the human being led to a “true image” of man is found in The History of The Race Idea. He points out that, at present, the idea of race is in a state of decay because the spiritual manner of seeing primal images has been lost. In its stead the race idea is approached with methods borrowed from the natural sciences. These give a truncated view of the human being. On the other hand the spiritual idea of race, represented by the George circle, works with the primal image of the entire human being. Voegelin writes:

“That the community of noble blood finds itself through the relationship of noble spirits, that the community is governed by its own laws through which the members find and recognize one another; . . . to know this, and much more, requires a primal way of seeing in which the full image of the human being is revealed.” [14]

Voegelin finds the principle by which the “full image of the human being is revealed” in Plato:

“Only where a spiritual norm gives order to human beings (‘in Zucht haelt’) and brings them together in harmony, can great history take place: for all time Plato has established the law of the reciprocal and mutually supporting claims of the noble body and the noble spirit.” [15]

What Voegelin describes is the view of the George circle, again as expressed by Friedrich Gundolf in his book on George:

“Where a primordial, god seeking, human being embodies a vision of the divine and an image of the world, the Platonic circle is repeated, from faith -that is by virtue of the blood, by virtue of the beautiful life [16]-to love, from love to vision, and from vision to will, which only awakens a response in contemporary and future human beings who also embody the same ‘virtue of blood.'” [17]

In view of Voegelin’s reference to Plato, adoption of the George circle’s concept of “noble blood,” and affirmation of the hierarchy of human types, it is clear that Voegelin sets his hopes for overcoming the biological-materialistic notion of the human being in the notion of a spiritual elite. But Voegelin laments that conditions are not yet ripe for the recognition of such an elite. Nothing remains of Schiller’s and Goethe’s idea of the “select circle,” and “George’s doctrine of the spiritual empire has not been understood.” Instead, from the dominance of natural science superstitions the dangerous notion has arisen that a race can be bred like animals:

“It is a nightmare to think that we should not recognize the people who we follow and who we let get close to us by their glance, their speech, and their comeliness (“am Blick, am Wort und an der Gebaerde”), but by their cranial index.” [18]

The task of awakening this primal way of seeing that will help his contemporaries see the primal image of “noble blood,” the basis of the “noble community” that is constituted in the “relationship of noble spirits,” will not be easy. But, so Voegelin, he, “who in matters of the spirit, makes it easy for himself, has no right to be heard.” [19] This sentence ends Voegelin’s Introduction to The History of the Race Idea. It is a quote from Friedrich Gundolf, but Voegelin does not put it in quotation marks, presumably because those who he wishes to address recognize one another “by their glance, their speech, and their comeliness” (“am Blick, am Wort und an der Gebaerde”), or, as George expressed the same thought:

“You will know who is genuine by his face and stature” (“Antliz und wuchs weist euch den Echten aus”) and “The rank of each individual is revealed in his glance (“Aus jedes aug erriet sich hier sein grad”).” [20]

[“The new nobility you seek

Is not found in crown or coat of arms

Nameless, and out of the mass, grow

And you recognize your brothers

In the honest fervor of their eyes.


Also see “Stefan George and the Return to Political Reality.”

William Petropulos is a Board Member of VoegelinView and a Research Fellow at the Voegelin Centre for the Study of Politics, Culture and Religion at the University of Munich. He is editor of Eric Voegelin's Collected Works, Volume 32: The Theory of Governance and Other Miscellaneous Papers (Missouri, 2004).

Utopian Forgetfulness of the Depth (Part I)

Legends of the Calgary School: Their Guns, Their Dogs,  and the Women Who Love Them

Eric Voegelin and Henri de Lubac: The Metaxy and the Suspended Middle (Part I)

Learning Through Stories: How to Start Teaching the Truth