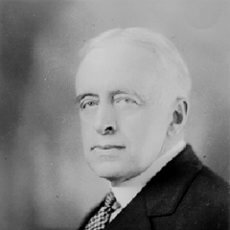 Over the years I have paid considerable attention to Irving Babbitt (1865-1933) in my teaching and writing. From time to time, students and others who have learnt something of Babbitt and who know the work of Eric Voegelin have asked me how it could be that Voegelin seems never to have commented on Babbitt. This American thinker did after all have ideas that overlapped with or resembled Voegelin’s or that would have been a natural supplement to his work. Although I am not an expert on Voegelin, I think I can explain his silence, and I have offered that opinion to those who have asked. Recently I showed two Voegelin scholars a written statement of my hypothesis. The one immediately suggested that I send the statement to VoegelinView, and the other one seconded the suggestion. So here, below, is my hypothesis

But first a brief biography of Babbitt. Having done his undergraduate and graduate work at Harvard, Irving Babbitt joined the Harvard faculty in 1894. He had hoped to teach classics, but falling enrollments in that field made Harvard point him in a different direction. He would become a professor of French and then Comparative Literature. His academic berth did not, in the end, much matter. Babbitt was interested in the large, central questions of human existence, and his scholarship would transcend disciplinary boundaries. He became a thinker of formidable scope and learning, ranging from Sanskrit and Asian religion to European literatures, philosophy and politics. His impact and importance as a thinker and teacher was widely acknowledged even during his lifetime, but he was also the subject of intense controversy.

“Progressives” of various kinds were setting the tone in academia and the culture, and Babbitt’s arguments were precisely what they did not want to hear. The hostility that he elicited from trend-setting figures sharply limited his influence. It gave him a reputation that had little to do with his actual beliefs. Everybody seemed to know what to think of Babbitt, but few took the trouble to find out where he really stood. Though out of step with American academic currents, he continued after his death to have a significant influence, though under a cloud of disdain created by his enemies that made it dangerous for admiring scholars to mention his name. Among the many now dead who nevertheless acknowledged their indebtedness to Babbitt were Paul Elmer More, T.S. Eliot, Lynn Harold Hough, Werner Jaeger, Louis Mercier, Nathan Pusey, Austin Warren, Peter Viereck, Russell Kirk, and George Panichas. It is one of the great misfortunes of the last century that this remarkable and original American thinker did not get the wider audience that he deserved and that philosophers did not avail themselves of and more fully explicate his work. Babbitt had penetratingly diagnosed the main problems of the modern age and explained how to address them.

It is highly unlikely—virtually impossible—that Eric Voegelin would have been unaware of Irving Babbitt. Babbitt was a big name at a time when Voegelin was paying close attention to America. The fact that Babbitt was fiercely attacked by so many prominent academic and cultural figures would have only increased Voegelin’s curiosity. Babbitt’s scholarly interests and intellectual purposes were also similar to Voegelin’s. It is simply implausible that Voegelin would have deemed Babbitt less worthy of discussion than each of the Americans to whom he did pay attention.

I suspect that the reason for Voegelin’s silence was quite different. His neglect of Babbitt forms part of a pattern. It is hardly coincidental that Voegelin also had almost nothing to say about a major figure in Western thought about whom Babbitt was famous for having written a great deal and for regarding as central to understanding the modern Western world—Jean-Jacques Rousseau. One might have thought that at least in From Enlightenment to Revolution Voegelin would have discussed Rousseau at some length, but he barely mentions him. This is the case although the French Revolution has always been understood as having been substantially affected by Rousseauistic ideas. More than any other writer, Rousseau may have provided the spark for the Revolution, to say nothing of his subsequent influence on revolutionary sentiments and movements. Voegelin’s neglect of Rousseau is so glaring and surprising that it must have had a special reason. To assume that Voegelin considered Rousseau historically or intrinsically insignificant would be to call his basic judgment into question. No, it is far more likely that Voegelin decided to postpone dealing with this thinker, who did not fit his accustomed interpretative method and would therefore require considerable time and effort.

There is a third omission in Voegelin’s work that is also major and striking: a neglect of the imagination as a central and distinct philosophical category. One might have thought that Voegelin’s interest in symbols and “experience” would have made him deal in some depth with the imagination, but it was not until very late in his life, in the fifth, posthumously published volume of Order and History, that Voegelin devoted a couple of pages to “the imagination.” He used the word “imaginative” and “imagination” also elsewhere in the book. But his explication of the term was vague and tentative. He seemed to want to connect his use of the term with how it had been understood “since antiquity.”

But Babbitt’s notion of the imagination contrasted with the old Greek notion in that he assumed that the imagination is creative and has a large, synthetic role. Modern aesthetics had yielded an understanding of the imagination that was much different from that of antiquity and that had far-reaching implications not just for aesthetics but also for epistemology and philosophy generally. In the early twentieth century Benedetto Croce, in particular, had given new depth and precision to the philosophy of imagination. Babbitt rejected the doctrine of l’art pour l’art commonly associated with modern aesthetics and was sharply critical of the very dubious uses to which the imagination had been put by most of the romantics, notably that pioneering dreamer Rousseau, but Babbitt, following his own route, had nevertheless arrived at the notion of imagination as creative and fundamental in human consciousness.

Voegelin’s work as a whole suggests that he never set himself the task of philosophically exploring the meaning of imagination, although as a major thinker he could hardly fail to take some account, however indirect and general, of such a prominent dimension of consciousness. Some of his key terms may be viewed as composites and as accommodating more than one aspect of consciousness. Voegelin’s notion of nous, for example, was rather compact and can be interpreted as containing an element of what Babbitt, borrowing the phrase of Edmund Burke, calls “the moral imagination.”

Note the common denominator of the three mentioned omissions in Voegelin’s work. Each of them involves avoidance of a subject that would require a more than passing familiarity with the philosophy of aesthetics and with how the imagination relates to the moral-spiritual life. Babbitt saw a close connection between imagination and the morally cleft human will. This was for him a crucial subject, and it helps explain his strong interest in Rousseau, whose imagination he saw as undermining the role of character in the moral-spiritual life and as being a particularly potent and influential threat to classical and Christian civilization.

It is on the basis of this pattern of omission that I venture my hypothesis: Voegelin must surely have intuited some of the importance of what he chose not to discuss, but he probably felt unprepared to handle the relevant set of philosophical issues. How could he possibly have missed the originality and great influence of Rousseau? The odds are that Voegelin did have at least a budding awareness of his importance. But he also regarded “reason as the constituent of man’s humanity,” to quote Jürgen Gebhardt (the Epilogue to In Search of Order), and he was looking for sources of spiritual and other deformation that could be explained as being perversions of reason. He also worked from a rather compact idea of reason. We may surmise that Voegelin recognized that his own approach to fundamental questions would not take him to the heart of what was distinctive and significant about Rousseau.

Rousseau’s assault on traditional Western civilization did not primarily involve Enlightenment rationalism or a propensity for “egophanic” Reason. According to Babbitt, Rousseau’s egotism was of another, more insidious and enticing type. Like Voegelin, Babbitt was defending classical and Christian civilization, and, like Voegelin, he opposed rationalism and scientism, but, for him, the greatest need when trying to understand and counteract what was going drastically wrong in the Western world was to understand how the interplay of will and imagination either deepens or distorts the moral-religious life. In Babbitt’s view, Rousseau’s great influence was attributable first of all to a special quality of the imagination and an underlying quality of will. Together they produced a “sham spirituality”: a sentimental humanitarianism that expresses egotistical moral laziness. This “spirituality” greatly appealed to post-Christians and deeply affected Christianity itself. Voegelin sniffed out some of this influence in his own way, but interpreted it differently because of his Platonic bias.

It is not far-fetched, then, to speculate that whenever Voegelin encountered Rousseau and Babbitt he did not quite know what to make of them. He probably intuited that dealing more than superficially with them would require some philosophical preparation and adjustment. So he may have set them aside for the moment, thinking perhaps that he would return to them at a more opportune time.

It should be mentioned that I have devoted much of my published writing to sorting out the mentioned aspects of human consciousness and how they interact in producing our view of ourselves and the world. The book that is most directly relevant to this discussion of Voegelin and Babbitt is Will, Imagination and Reason: Babbitt, Croce and the Problem of Reality (exp. rev. ed. 1997).

There is an additional possible explanation for why Voegelin would have been reluctant to revise his research agenda and interpretative approach and to take up a new line of philosophical exploration. Babbitt had arrived at his key insights well over a generation before Voegelin. To the extent that Voegelin became acquainted with him, he would have realized that Babbitt’s ideas were in some respects very similar to his own, although they were stated differently and had been developed mostly with reference to different research materials. He would have found that his own evolving thinking was less original than he may have thought. Babbitt also went beyond Voegelin in ways—most importantly, giving central roles to the imagination and the will—that suggested a need for extending and modifying Voegelin’s understanding of the sources of spiritual deformation or health. Babbitt’s ideas regarding moral-spiritual questions also applied more obviously and directly to actual human affairs, including politics, than did Voegelin’s. Would this rather imposing American figure disapprove of a Platonic type of transcendence and any corresponding disinclination to engage the problems of ordinary life?

All in all, tackling Babbitt, Rousseau, the imagination and related philosophical issues may have struck Voegelin as a daunting and not entirely pleasant task. Yet near the end of his life he apparently did feel a need to take up the issue of imagination and to do so in relation to his own central concerns, which had been Babbitt’s approach. One may speculate that Voegelin had long thought that sooner or later he ought to get around to that subject.

Claes G. Ryn is Professor of Politics at The Catholic University of America in Washington, D.C. He is author of several books, including America the Virtuous: The Crisis of Democracy and the Quest for Empire (Transaction, 2009).