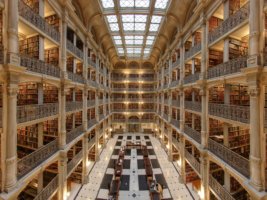 The problem with reforms is that they almost always are thinly-veiled programs of revolutionary action. Sold as corrections of abuses, reforms generally aim to subvert existing institutions and replace them with the latest plan to achieve Progress through centralized planning. Our society’s transformation from one of dedication to family, faith, and freedom to one of individualism and dependence in the social democratic state was carried out in the name of mere reform. Economic, political, and social structures would be made more fair and efficient, we were told. We were not told that this would entail their subordination to an omnicompetent state.

All of which makes reform seem like a bad idea.

But our system of higher education is a special case. Once a set of largely independent institutions sharing a common understanding of what it means to be a responsible member of a free society within Western civilization, this system has been centralized, stratified, and unified in a political vision inimical to its fundamental nature. To point out the hostility of most universities to our social, cultural, and intellectual traditions is nothing new, just as to scoff (or scream) at the understandings on which such a critique rests is no longer new. But it is long past time that sensible Americans recognize the new character of official education and do something to mitigate its damaging effects on society.

Conservatives, Christians, and observant Jews have heard about the prevalence of anti-Western bias on campus with sufficient frequency that further exposition may actually be counterproductive. It should suffice merely to point out that even moderates and old-style liberals are a tiny minority among faculty and administrators on most campuses and that actual conservatives of faith (as opposed to the occasional secular libertarian) are essentially non-existent. What is more, the Left on campus is no mere collection of liberal Democrats. It is, rather, a collection of Marxist and identity politics radicals as far outside the American political mainstream on the left as so-called “alt-right” figures on the right.

Thus, the question is no longer “how do we save our educational establishment” from its current intellectual insanity. The vast majority of universities are irreversibly beyond reason. The real question has become “how do we limit the damage done to our society by an overwhelmingly hostile educational establishment?” This is an important question because the educational establishment, particularly at elite institutions, trains the teachers, administrators, and professionals who control education, shape professional organizations among lawyers, accountants, and others, and in general have an outsized influence on the rules and norms by which our economy, our government, and all too many of our social institutions are run. Moreover, these institutions use their vast wealth to shape their own student bodies (through admissions and scholarship policies) and alter even the economic landscape; tens of billions of dollars in endowments translate into real power in shaping business decisions, especially when used consistently to promote “social justice” as defined by the Left.

How, then, can we limit the power of Yale, Harvard, and other institutions, through indoctrination on campus and economic pressure in investment, to further skew leftward and in an overtly anti-Western manner, our institutions, beliefs, and practices? A modest program, incorporating ideas formulated by several others in recent years and months, would include simple reforms that could be undertaken administratively and legislation that would simply take away some of the massively-abused preferences now built into laws favoring educational institutions.

The top priority must be to halt the latest assault on freedom of speech and thought unleashed by the Obama Administration Education Department’s Office for Civil Rights. This Office issued a mere letter outlining its enforcement priorities. The letter supposedly addresses problems of sexual assault on campus. It does no such thing. Unfortunately, because the Office can tie up universities in long, expensive litigation, this letter empowered radical mid-level university administrators to double-down on draconian policies and ideological indoctrination sessions for faculty, staff, and students that further the already-dominant radical feminist agenda on campus. The toxic “hook-up” culture having produced many tragic consequences, the Obama Education Department capitalized on the situation by bullying (all-too-willing) universities to suspend basic procedural rights for those accused of sexual assault and, worse, institute yet more required indoctrination sessions and reporting requirements.

Instead of reinstituting appropriate oversight of basic norms of decent conduct, these actions, instituted by the Education Department and weaponized by college administrators, are creating an atmosphere of fear and suspicion among faculty and students that does nothing to address sexual assault, but a great deal to further empower identity politics and its enforcers on campus. The Trump Administration can and should bring a stop to this latest assault on freedom of speech and thought by rescinding the appalling enforcement letter and replacing it with a letter and Executive Order making clear that the Administration will move against universities that fail to respect due process rights for all students, including those accused of sexual assault and those who express currently unpopular (almost always conservative or libertarian) views. Sexual assault is an extremely serious problem—so serious that it should be addressed by the proper, competent authorities instead of being used as a tool of political indoctrination.

Several commentators and Members of Congress already have broached the worthy subject of taxing large university endowments. Some universities have endowments well into the tens of billions of dollars, which works out to millions of dollars in investments per student. It is reprehensible that these rich, elite institutions are allowed to exert their will in markets and over the financial well-being of students (and parents) without paying taxes—even while collecting millions in tax subsidies.

Elite universities defend their special treatment by claiming that they are non-profit organizations serving the public good. Even were it the case that these hyper-politicized institutions seek to merely serve the public good, their decision to keep building endowments while increasing tuition rates bespeaks a profit motive under a patina of intellectual smugness. Subjecting endowments of over $1 billion to normal tax rates and ending various subsidies might correct some of the pro-tax-and-spend bias of universities. It definitely would give them the opportunity to make a principled choice between educating their students and operating investment empires.

One of the largest subsidies provided to elite universities goes by the name “overhead.” Government grants for various forms of more or less scientific research serve as a windfall to the hosting institution. Generally made to specific researchers, these grants provide millions of dollars per year to universities through charges for administrative “overhead” and provision of (highly over-priced) research facilities. By providing the grants directly to researchers or, more likely, to third-party research organizations that would compete for grant business, the federal government could encourage research and development while also encouraging economic development and ending government subsidization of politically-correct administrative organizations. These organizations too often live parasitically off faculty grants, even as they push researchers into areas of dubious utility and common sense.

Last, but definitely not least, government financial aid subsidies, if they are not to end, must be revised to minimize their encouragement of ideologically driven bureaucratic bloat. A central factor in the rise of tuition costs in the United States has been the misbegotten student aid system, especially its student loan guarantee program. By providing subsidies for almost limitless loans, the federal government has written universities a blank check. The universities, in turn, have used this money to pad their own payrolls with endless administrators devoted to politically correct programs that undermine education and put in its place ideological indoctrination—all at astronomical cost. By capping student loan availability at a rate consistent with a reasonable tuition cost (say, $20,000 per year), the government would cease subsidizing bureaucratic bloat. Universities would have to make up the difference in tuition costs through their own internal funding, drop their tuition rates through internal cost-cutting, or simply admit that they effectively are open only to the rich. The continuing tragedy of students mired in hundreds of thousands of dollars of student debt, without any reasonable prospect of finding jobs that will enable them to pay them off, would finally end. And universities would face the choice of providing students with lower-cost education, or at least value for their money in a competitive marketplace of education and ideas.

This is no grand program of reform. To recover our social traditions and the cultural knowledge undergirding them will be the job of generations. It will have to be undertaken in smaller colleges where teaching within the Western tradition can still be maintained. But we can and should work to reduce the harm visited on our society by universities increasingly dedicated to identity politics and to indoctrinating students into that politics with the aid and funding of our federal government.

This was originally published with the same title in The Imaginative Conservative on May 14, 2017.