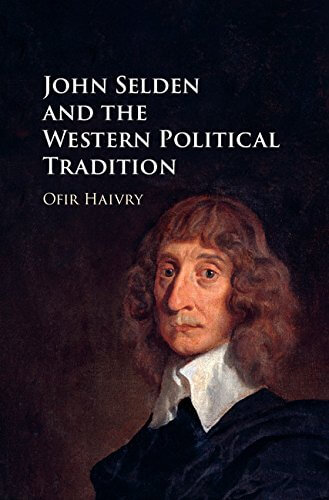 Beyond the circles of specialists in legal and political theory and history who have found him worthy of close attention, John Selden is probably best known today, if he is known at all, as a contemporary of Sir Edward Coke, who defended the rights of Englishmen in parliament against encroachments by King Charles I. In his book on Selden’s political thought, Ofir Haivry makes the strongest case yet that Selden’s corpus should be read and understood more widely. Selden is especially relevant if we are indeed entering a post-liberal age as many political observers now predict, whether in hope or in fear of that prospect.

Selden’s political thought belongs to what has been called the “Protestant construction of the West” or the “political thought of the free state” a pre-liberal tradition including early modern political treatises such as Hooker’s Ecclesiastical Polity, the works of Sir Edward Coke, and of many other figures now grown even more obscure, which contains most of the matter that was later absorbed by the philosophy of liberalism— concepts such as representative government, limited government, the separation of powers, and individual rights, but finds their grounding in national tradition rather than in universal reason, and, what is more, is not limited to these ideas.  Unlike John Locke and his intellectual heirs, Selden and other writers in this tradition give due consideration to the tribal, national and religious dimensions of man, and apply this philosophical anthropology to their investigations of the causes of political order, the origin of the state and the sources of community cohesion. Thus, Selden offers a political theory that balances the concerns of community cohesion and individual freedom without turning either into an absolute, reconciles natural law and tradition, acknowledges the variety of national cultures and institutions rather than engendering false hope for a single political formula that could embrace all mankind.[1]

Haivry’s treatment of Selden’s career and political thought is comprehensive. For the purposes of this review I will consider a few important themes, beginning with basic questions of epistemology. Haivry draws a sharp contrast between Selden and those whose political thinking relies on enlightenment rationalism, such as Grotius, Hobbes and Locke.  This is one of the topics considered in his massive treatise De Jure Naturali et Gentium (1640).[2] For Selden, “pure and simple reason” cannot serve as the foundation for knowledge and understanding about the world. This is because use of simple reason by different persons leads to so many inconsistent and dissimilar results, whether it is being practiced by ordinary men, or by philosophers. This makes simple reason an inadequate foundation for political obligation, among other things.  One man’s line of reasoning may be convincing to himself, but will not be so to others: it can “persuade and prove, but it does not command” (p. 226).  Thus, Selden proposes two alternative paths to truth, active intellect (intellectus agens) and tradition. In Selden’s interpretation, active intellect is an ability to access the truth which has belonged only to exceptionally gifted persons in the history of mankind. It is a sort of divine inspiration. The members of a nation cannot depend on the emergence of such persons to guide them in every generation, but they can study the actions and ideas of persons who possessed it in the past.  Past manifestations of active intellect are thus one component of tradition. The other component is the record of the actions and events of more ordinary men with their manifold trials and errors throughout history. Together these two strands serve as the basis for knowledge as tradition (p. 231). To rely on tradition as a source of knowledge, for Selden, does not mean accepting the words аnd deeds of the past uncritically. The historical records may contain errors, certain customs of the past may have been corrupted, or may be inadequate to address present circumstances. For Selden, Jeremiah 6:16 articulates the proper approach to tradition: “Stand above the roads, and see, and inquire which of the ancient paths is the right one and walk therein, and you shall find rest for your souls” (p. 234).

At the core of Selden’s project, at least in Haivry’s framing of it, is an attempt to reconcile universal precepts of natural law with the traditions of particular nations. Such a reconciliation, in Selden’s view, was achieved with the most success in the Jewish tradition of natural law, which he examines most extensively in De Jure Naturali et Gentium. The Jewish natural law tradition is based on the Noahide laws, the commandments given to mankind after the flood. In this tradition, the first seven of the Noahide laws receive particular emphasis: they contain fundamental moral precepts, applicable to all nations, concerning relations between God and man—how the Creator is to be acknowledged and honored—and relations between man and man—rights of life, liberty and property, sexual morality, the administration of justice and political obligation (p. 241). In this tradition, the most basic principle, the most universal precept of natural law, resting on a divine commandment, is the obligation to keep one’s covenants (p. 242). Natural law thus binds human beings not only to general rules applicable to all mankind, but also to the particular customs, laws and constitutions that have arisen in their nations. Selden’s approach to human affairs is, in Haivry’s words, “dramatically conventionalist”: the laws of various peoples differ greatly, but as long as they do not contravene the most basic limitations imposed by natural law, they too are supported by divine injunction (p. 243).  The obligation to national tradition is based not only on consent, however that may be defined—this is a topic that Haivry covers in detail in Chapter 3, contrasting Selden’s conception the social contract with those of Grotius and Hobbes. It is also based on a recognition that the genius of each nation differs and so the customs, laws and constitutions must be suited to the national character. Haivry quotes Selden’s commentary in his “Notes” on Sir John Fortescue’s De Laudibus Legum Angliae:  “Divers nations, as divers men, have their divers collections and inferences; and so make their divers laws to grow to what they are, out of one and the same root… [t]hose which best fit the state wherein they are, clearly deserve the name of best laws” (pp. 303-304).

Much of Haivry’s book is devoted to reconstructing the theoretical underpinnings of Selden’s approach to English constitutional politics. What, then, of the English constitution itself? As Haivry shows, unlike various monarchists, republicans and Presbyterians who sought radical alterations of England’s frame of government in the mid-17th century, Selden was convinced that the country would be best served by the preservation, and, where necessary, restoration of its authentic constitutions of church and state. Discovering this authentic form was to be achieved by a careful sifting and weighing of the historical record and the principles suggested thereby. England’s ancient frame of government, as Selden understood it, was one that promoted a particular English Protestant discipline while tolerating Christian dissenters, distributed and coordinated civil and ecclesiastical powers among the different parts of the government, represented all the major interests of the nation, and protected individual rights. Examples of each of these components of the English constitution are provided. In 1621 Selden was employed by a committee in the House of Lords to produce a record of the historic rights and procedures of that body. The most significant result of that effort was the revival of the judicial powers of the Lords, which were used thereafter to prosecute monopolists and other offenders of the public good (p. 36). While the historic constitution endowed certain bodies with particular powers, it designated other essential powers as shared. In the conflict between King and Parliament in the 1640s, Selden defended the view that legislation was a coordinate power. This meant, with respect to the major constitutional dispute of the time that neither the king nor parliament had the right to raise an army without the other’s assent (p. 76).  Selden’s activity as legal counsel in the Five Knight’s case, and then as an MP in 1628 contributed much to the reaffirmation of “the substance of Magna Carta and the best of those laws concerning the liberty of the subject in their persons and goods” (p. 45).

Haivry devotes all of chapter 6 to Selden’s understanding of the role of religion and the clergy in the English constitution. Contrary to the accounts of other scholars, Selden cannot be characterized as anticlerical, an Erastian or a cynic. His writings and speeches defend England’s Protestant establishment not as theoretical or accidental innovation, but as a restoration of an older model of church-state organization realized in the ancient Jewish state, the early Christian church, and pre-Conquest England. In all three, church and state were integrated, with clerical and lay figures performing both civil and ecclesiastical functions. Selden defends this model, and criticizes the alternative, some form of separation of church and state, in more general terms in his last major work, De Synedriis. The integration of Church and state is a necessity for Selden—it is a means of representing the spiritual dimension of the nation in government, but also of limiting clerical power. The clergy have their representatives in parliament, but their power over the religious discipline of the nation is not exclusive, as they must deliberate together with representatives of the rest of the national community concerning religious affairs (pp. 456-457).

In his conclusion, Haivry notes that the English political tradition that John Selden represents is, like the title of one his earliest books, Janus-faced, that is, it looks backward and forward at the same time (p. 468). If in the 21st century we witness a general waning of historical consciousness together with increasingly strident calls from some quarters for the destruction of historic symbols and institutions, then acquaintance with the political thought of Selden and others like him seems all the more important. Selden’s life and work show us a different approach. It may be that a recovery and reconstruction of certain elements of the past offer us the best path to the future.

[2] The Hertzl Institute, of which Haivry is an officer, has commissioned English translations of De Jure Naturali et Gentium and De Synedriis, Selden’s most voluminous and philosophical texts, which are currently being edited and prepared for publication.

Ethan Alexander-Davey is an Assistant Professor of Political Science at Campbell University in North Carolina. He is co-editor, with Richard Avramenko, of Aristocratic Souls in Democratic Times (Lexington Books, 2018), and author of several articles on early modern constitutional thought and 19th century Russian conservative thought.