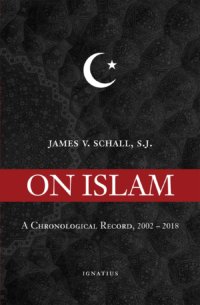 Michael Cook, the Editor of MercatorNet, has kindly invited me to make some comments on a new book of mine, On Islam: A Chronological Record, 2002-2018. Several of the chapters in this book originally appeared in MercatorNet. As I mention in the book’s Introduction, I have paid attention to the rises and falls of Islam ever since I read, some sixty years ago, Hilaire Belloc’s 1937 book, The Crusades. This book carried a poignant account of the final Christian defeat in its efforts to reclaim the Holy Land and to tame the expansionist ambitions into Europe of shrewd and tough Muslim warriors.

About a fifth of the world’s population is Muslim in one or another of its various forms, usually Sunni or Shiite. The great majority of the Muslim populace lives in some forty countries. Most of these entities were formed in their political structures by 18th and 19th Century European conquest and influence. The caliphate, not the nation-state, seems to be the more natural political form of Islamic peoples.

To the outside world, this Islamic area, stretched across the middle of the Northern Hemisphere from the Atlantic to Indonesia, seemed rather stagnant until suddenly, on September 11, 2001, the world’s attention was concentrated on the graphic destruction of the World Trade Towers in New York City. Since that time, wars and struggles with some phase of Islamic influence have become a major part of our daily news and international politics.

In the last decade or so, Muslims from Pakistan, the near east, and Africa have been steadily moving, legally or illegally, into Europe and America. They have changed the visage of many famous cities. At the same time, many Christians in the Middle East have been persecuted and killed in Muslim lands with relatively little interest in their fate on the part of the rest of the world.

Added to this refugee/invasion phenomenon is a Muslim family policy that results in significant growth through numerous new births. The most common name of boys in many European cities today is now Mohammed. It is not an unknown name on American football and basketball teams. Many conversions to Islam take place in prisons. This growth of Muslim population is especially significant against the background of declining numbers of children among European peoples.

Islam is unabashedly a religion that affirms that everyone should be Muslim. Indeed, it assumes that everyone is born Muslim. It does not hesitate, when it sees the opportunities, to expand by what are considered the best means available to achieve this purpose wherever it is not successfully resisted. Many minor “wars” and skirmishes on Islamic world frontiers have this increase of influence as their cause.

Over the years since 9/11, I have often written essays occasioned by a political or military crisis caused by some incident involving Islamic power. The collection of these accounts serves as the core of this book. It turns out to be a chronology of a continuing assault, an encounter between Islam and the West. Gathering these accounts in one volume serves to emphasize the nature of the continuing, increasing confrontation of Islam over against the powers that it did not conquer in earlier centuries of Muslim expansion. Islam does not forget what it conceives its greater mission even when, by superior power, it is blocked for a time, as at Tours in the 8th Century and Vienna in the 17th. I have a certain grudging admiration for this persistence.

This book is not written by a so-called “Islamophobe”, a word concocted largely to avoid facing the real challenge that Islam presents to contemporary society. The expression “war against terror” is a verbal fog that descended on minds incapable or, more accurately, unwilling to see the religious origins of Islam even when they included, as they did, the use of force in political matters.

This book is counter-cultural in the sense that it was written by someone who has some sympathy for the militant side of Islam. The so-called “terrorists” are not somehow inexplicable fanatics who act for no conceivable reason. For the most part, the militancy in all its forms, including sundry bombings of night clubs and trucks driven into Christmas markets, arises from a faithful reading of parts of the Qur’an.

These mostly young men, who, in killing others, often kill themselves shouting Muslim praises, are not acting against but for Islam and its long-range mission to conquer the world for Allah. As far as I know, no reputable scholar denies that the use of violence is permitted and encouraged by the Qur’an. Wherever and whenever it is read, it will produce those who seek to further, also by the use of force, its vision of world conquest and submission to Allah. Islam does not have to use this means, which may not at a given time be the most effective ones. But they are always available.

In the Modern Age in 1975, I wrote an essay entitled “On the Teaching of Ancient and Medieval Political Theory.” The gist of this essay was that by neglecting classical and medieval history and philosophy, including Muslim sources, by beginning our courses with, say, the Reformation, the French Revolution, or World War I, we cut ourselves off from understanding what goes on among earlier believers and thinkers who had already confronted issues that reappear with the modern revival of Islam. I doubt today if I could make the same argument because dominant theories of historicism and positivism make it almost impossible to learn anything from mind or history.

Most contemporary believers, including the Christian ones, are as ignorant of such origins as are unbelievers. But the point was that a Christian should be able to understand what a Muslim believed and how he might act on this belief. The Christian would not agree with the Muslim view, but he could quite clearly understand that Muslim expansion since the seventh century had a deep religious component that the holy wars did not obviate, indeed, that justified them.

A sub-plot of this book concerns not so much Islam but why it is not understood among believers and unbelievers alike in the West. As far as I can see, the Russians, Chinese, Indians, Japanese, and Africans have much less difficulty. In his Regensburg Lecture, Benedict XVI noted the philosophical similarity between the voluntarism of the Muslim mind and the voluntarism of the modern western mind. Voluntarism means that there is no stable objective order so that a person or a government is not bound by any distinction between good and evil.

It is very difficult for most people to come to terms with a religion that can abide over centuries and continue, in other times and places, to pursue the same goal. By not believing such a mission is possible, western politicians and thinkers assume that Islam can be changed into something it is not. Democracy is then held to be an instrument to change the terrorists so that eventually they will “reform” their religion into something it is not.

What actually happens is that, under democratic conditions, Islam does not itself change but isolates itself into its own enclaves. It learns to use democratic voting as effectively as it used guns. With the defeat of ISIS forces in Iraq, if they are defeated, many Muslims have seen the possibility of continuing the mission by gradually taking over, with the help of demographics, one after another western political system, be it city, county, or nation. It is not insignificant that the mayor of London is a Muslim.

Whether this approach can succeed remains to be seen. But the western liberal mind is so incapable of appreciating the persistence of the Islamic mission that it cannot grasp the historical unity of all Muslim endeavors. It is this latter persistence of purpose that I cannot help but admire.

Islam will be Islam as long as the Qur’an and the history of Muslim expansion through arms are thought by Muslims themselves to be definitive. I see the issues with Islam primarily in the light of its credibility. The notion that the Qur’an is a final divine revelation supplanting or correcting Jewish and Christian sources is not intellectually tenable. The actual composition of the Qur’an as a book needs to be carefully analyzed. Why this effort has not been done before is one of the illuminating aspects of the power of Islam. As a general rule, Islam expands when it can expand. When it is opposed and contained, it begins to think that Allah is not with it.

The financial basis of Islamic power has not been in its own economic development. It is based on the fact that it sat on so much oil, made doubly important by not developing and using oil produced in other areas. Almost all Islamic states are economically backward. But it is clear that attention to modern technology and to the use of democratic means for Muslim ends present an alternative to the ISIS type approach. This latter, the one we see mostly chronicled in this book, sought to bring Islam to every nation and city and street. This approach is not dead. But it now exists in tandem with another way to achieve the ends of Muslim religion. The end in either case is a religious one. It is the establishment, throughout the world, of systems of submission to Allah that look pretty much like what we see in Muslim societies whenever they gain full control of the levers of power, namely the submission of the world to Allah. If Islam does not eventually succeed, it will not for want in trying. If it does succeed, we now have a pretty good idea of what it will look like.

This was originally published on MercatorNet on April 11, 2018.

A Thinker You Should Know: Eric Voegelin

Czeslaw Milosz and the Metaxy

On the Reading of Books