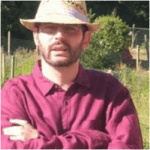 Peter Losonczi (1970-2015) was born in a Budapest under communist rule, to a Catholic mother and Jewish father. All of these identities were crucial to him and informed his mature political-theological thought and work. In his teens, he grew increasingly politically active in the anti-Communist agitation. Already in his late teens he discovered that he had a penchant for leading and organizing. By the time the wall came down, Peter had led several student protest rallies and, though completely an intellectual in orientation and temperament, he was committed to a life of political engagement.

Peter completed his BA and MA degrees at Budapest’s prestigious ELTE University. His interest in phenomenology led him to the Catholic University of Leuven (Belgium), where he studied intensively the tacit theological dimension of Heidegger’s work, and wrote a highly innovative MPhil thesis on the Jesuit elements of Descartes’ modernism. He also threw himself into deep, critical study of Levinas at this time. After completing his PhD at Leuven in 2004, Peter returned to Hungary to teach Philosophy at several provincial universities, but his interest in theology and central European politics continued to grow. In particular, Peter was intrigued with Jürgen Habermas’ shifting focus toward questions and challenges related to religion in the public sphere. He supplemented his study of Habermas with Charles Taylor whose writings brought his attention to some of the writings of Rajeev Bhargava on the secularism debates in India. Convinced that the Indian context and surrounding debate would be instructive toward the emerging situation in Europe, Peter acquired an India-Hungary exchange fellowship to study for a brief period in New Delhi in late 2007. In that period, he studied assiduously the writings of Ashis Nandy, Neera Chandhoke, TN Madan, Akeel Bilgrami, and he also gave lectures at the University of Delhi on the emerging so-called ‘post-secular’ situation in Europe.

Upon return to Hungary, Peter contacted some of his colleagues who shared his interest in the prospects and challenges of religion in the public sphere and suggested that they form a research network devoted to research and writing in this area. Thus was founded the International Research Network on Religion and Democracy (www.irnrd.org) in 2008, which Peter led with amazing energy from 2008 right up until his death. During this period, Peter pushed, prompted and cajoled numerous academics and institutions around the world to take seriously the new visibility of religion, bringing to fruition conferences and workshops not just in Budapest and Leuven, but also in Delhi, Beirut, Jerusalem, Rome, Oslo, Manchester, Prague, Bordeaux, Lapland, and several other places.

Although Peter authored two monographs in Hungarian, during the period of directing the IRNRD, above all he focused on bringing out innovative, collaborative works that opened up new perspectives on religion and democracy investigated from all angles. A lifelong preoccupation with inter-faith dialogue, and especially between the traditions forming his own identity, Judaism and Catholicism, took fruit in his first volume in English, Reflecting Diversity: Historical and Thematic Perspectives in the Jewish and Christian Tradition (LIT). Peter’s early interest in Habermas’ post-secular writings took shape in Discoursing the Post-Secular: Essays on the Habermasian Post-Secular Turn (LIT Verlag). All along, he continued to pursue his interest in religion in modern thought with Philosophy Begins in Wonder: An Introduction to Early Modern Philosophy, Theology, and Science (Pickwick).

Since around 2010, Peter began to cultivate expertise in political theology, especially the new political theology of Johann Baptist Metz. This orientation resulted in the volumes, The Future of Political Theology: Religious and Theological Perspectives (Ashgate), and From Political Theory to Political Theology (Continuum/Bloomsbury). It also led to his close collaboration with Political Theology, both the blog (Political Theology Today) and the print journal, whose editorial board he joined in 2014. And coming full circle, very recently Peter published Secularism, Religion and Politics: India & Europe (Routledge), reflecting his previous experience of comparing the secularism debates in India and Europe – the event that had inspired him to form the IRNRD in the first place.

Peter remained active in politics not merely by grounding his theoretical and theological writings within it. He was also an active supporter of conservative parties in Hungary and a grass-roots campaigner for the Hungarian Green Party at the EU level. Indeed, it was as an activist that I first came to know Peter personally. As a fellow student at the Higher Institute of Philosophy at Leuven, and above all because of my numerous Hungarian friends at the University, Peter suggested I join “a few” Hungarian students for a protest march in Brussels, to raise attention about the pollution of the Danube river. To my surprise, Peter had brought together hundreds of people for the march – I could not believe his skill with logistics. The protest was expertly organized and succeeded in drawing a fair amount of attention.

Around the same time, Peter asked me for help editing the English of his M.Phil thesis on Descartes. I still remember first reading his thesis 15 years ago and being overwhelmed by the brilliance and insightfulness of that little work. It was then we first became friends. His thesis went so much against the grain, against the dogma of all scholarship I was familiar with, and we argued about his position on numerous occasions over the years. But our most persistent argument over all these years has always centered on Marx: Peter’s anti-communist fervor developed in his youth scarcely mellowed over time.

We also argued about Strauss and Voegelin in the late 1990s, and his interest in Voegelin continued after that with serious study of his works. I had written my M.Phil thesis at Leuven on Strauss’s interpretation of Spinoza’s Tractatus Theologico-Politicus and Peter had some disagreements with my understanding of Strauss. In 2011-2012 Peter intensified his study of Voegelin, having been asked to review a journal article on Voegelin for a European journal devoted to international relations. I recall him mentioning to me that the journal article he was asked to referee was disappointing, but that he was at least happy that its author and the journal were taking Voegelin so seriously. He then said, “I have been reading Voegelin for over a dozen years,” a remark that made me fondly remember back on our argumentative student days at Leuven.

Apart from being an innovative and imaginative scholar with irrepressible political commitment, there are two other aspects of Peter that stand out. That is, as a devoted father of three beautiful and brilliant children (Veronika, Balint, and Mate); and, as a kind, generous and attentive friend. Through all these different aspects, Peter’s spirit touched many lives.

The McConnell Center for the Study of Statesmanship