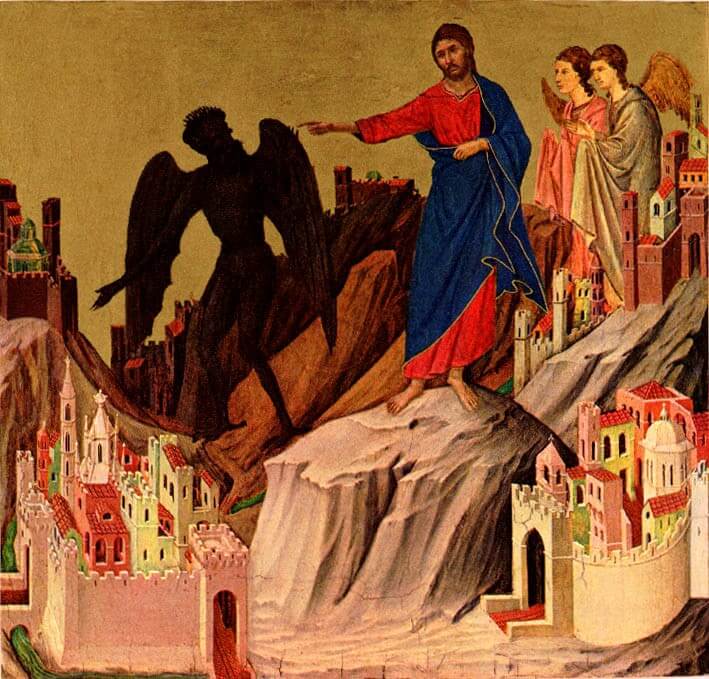 At a 1932 conference on quantum mechanics it was suggested that physicists should not worry about what quantum mechanics indicates about the nature of reality and they should “shut up and calculate.” There have been popular books written like The Tao of Physics and The Dancing Wu Li Masters hinting that physicists were worried about the spiritual implications of their equations and this was the reason for their aversion.

Plato and the physicist David Bohm suggest that a creative mind lies behind everything. The shut up and calculate people continue to regard matter as the basic stuff – rather than creative mind. Is it not God in which we live and move and have our being? Have those who see physical reality as a simulation got a point? What about synchronicities that interrupt cause and effect? Don’t they provide evidence of the spiritual?

“Shut up and calculate” is a very bad idea for science. Sean Carroll is a theoretical physicist who is interested in the foundations of quantum mechanics. He suggests there are about 100 serious such people on the planet. According to him the most straightforward implication of the equations is that new versions of you and the universe are being created every time there is a quantum measurement, following the multiple worlds interpretation. Here is a link to a tiny summary here.

If this is true, then it has impossibly awful theological implications. The idea of a human soul would become completely incoherent. So, hopefully Carroll is wrong. 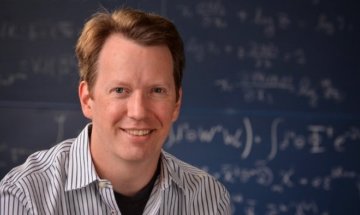 Physics studies the physical universe. It studies exteriors only. It is involved with objectivization – regarding everything as an object, including people insofar as people are even a thing in physics. Objectivization studies the world of phenomena. The noumenal world is not something that can be analyzed by science objectively. The noumenal world is interior, and spiritual. It is not and cannot be part of theoretical physics. Theoretical physics involves proofs. If it ever became possible to prove that God and the noumenal existed. If God and the noumenal ever became part of some goddamn equation, then God would not exist. God is not an equation. He is literally measureless. God is love and God is creative. Neither love nor creativity exist without Freedom, and equations and Freedom are incompatible.

A proof of God’s existence is a contradiction in terms. God can only be a matter of faith and doubt. I can say things like “If life makes sense; if morality and beauty exist, then God must exist” – but I can’t prove that life makes sense. I simply have faith that it does. Christ refused all three temptations – one was to tempt God by throwing himself down from a tower and forcing God to rescue him; another was to assume worldly power; the other was to turn stones into food. The upshot of submitting to all three temptations is slavery. If God proves his own existence without a shadow of doubt then we are slaves who must believe and worship him. God, if he is not a tyrant, does not want such a relationship with man. If God assumes worldly power and rules the planet, then we are slaves. If God provides free food, then we will slavishly do what he says to keep the free meals coming. (See The Grand Inquisitor section of The Brothers Karamazov). We do not want friends who like us because of the free meals we provide. We want to associate only with those who treasure our company for its own sake. We are not a bigger man than God. 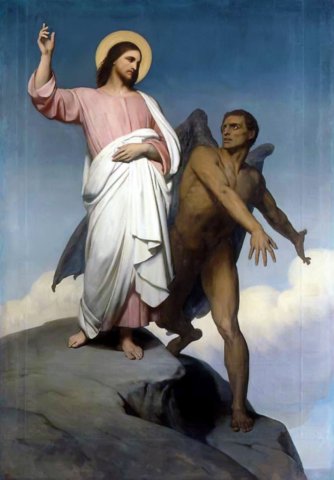 Wanting or hoping to encompass God in an equation would fulfill the most evil ambition ever attributed to the devil himself. It would demote God to a nothing, and the equation would be God. If quantum mechanics proves God exists, then it proves He does not exist.

Actually, God does not exist per se. He is not a being – he is beyond being. How could physics prove something that does not exist, exists? Another contradiction.

Plato discovered the noumenal, interior, world. Plato suggests that physical reality is the least real aspect of reality. He believed that there was nothing to be gained by studying the shadows. Plato wrote that some people regard themselves as very clever because they can learn to predict which shadow will succeed which shadow, but they are studying an illusion. Physics studies illusions. It tells us the truth about illusions – which has no Truth in it at all. At most, physics shows us how a magic trick is done. Anything physics can prove becomes part of objective reality – the world of objects. Our normal use of the terms “subjective” and “objective” are backwards. The subjective – that experienced as subject – is most real. The objective – that experienced as object – is least real. When we talk to a person it can either be I/Thou or I/It. When we talk to someone the interior person is the real them. If we had to choose between getting a new body or a new mind, we would choose a new body. A new mind would mean that we were no longer there to experience anything. 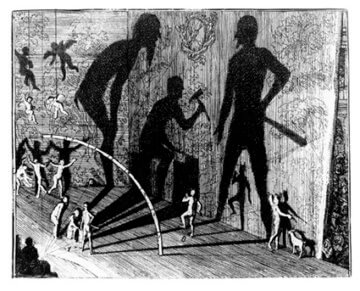 Pantheism is wrong. The physical universe is not God. God is not war, hunger, death, murder, hatred, disease, and misery. All those things are part of the world. God is love, and truth, beauty, and friendship. We live and move and have our being in God, perhaps, but not here on earth. Perhaps in some spiritual reality. But then spiritual reality conceived in such a fashion is just another object. Swedenborg, for instance, is describing spiritual reality as an analogue of physical reality. This, like much of theology, has been a false process of objectivization. Pantheism poses an unsolvable problem for theodicy; vindicating divine goodness in the face of evil.

There is not just one creative mind that we all plug into, or participate in. When God creates, he creates creatures with a connection to infinity – to the Ungrund from which Freedom emerges – a Freedom that can result in both good and evil. Each living creature, including cells, has an infinity within them. This allows us to be creative. Creativity means producing something from nothing. The Ungrund is this nothing – this ultimate, unexplainable, causeless, Mystery. When man creates, he can create only dead, soulless, things. He cannot make life or conscious beings. We can beget, but not create in that sense. If human beings ever create a sentient computer, then that computer would have a soul and we will have become like unto God. At that moment, the dream of God will be over. We will have proved that consciousness is merely an equation – the same equations physicists use – and man will be no more. We will have destroyed man and God simultaneously, and that would make total sense, since we are made in the image of God.

Perry Marshall in Evolution 2.0 shows that both creationists and Neo-Darwinists are wrong. Single cells demonstrate intelligence, and purpose – and thus Freedom. If they are not centers of consciousness in their own right, then they are just mechanisms being manipulated by God or just physical forces in a clockwork universe. And the same is true for us. In truth, we are like God in the sense that there is infinity within us that is completely unknowable and inexplicable that provides us with Freedom and thus creativity and love, as indicated by apophatic theology, and there is a part of us that is knowable and can be pointed at in the manner of kataphatic theology. The major difference between us and God is our inability to endow things with souls. 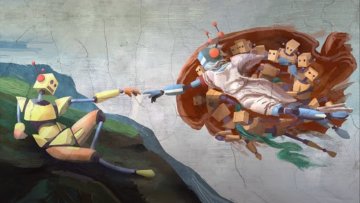 The point of synchronicity is that synchronicity is not capturable by equations. It is not part of the cause and effect of the objective world. Physics has absolutely nothing to say about it and this points to the impotence of physics. Synchronicity indicates the spiritual emptiness of physics. Synchronicity seems to have a playful, joyful, aspect to it. It is an intrusion of the noumenal into the phenomenal world, just as beauty is, and as such is part of grace. It is inexplicable. How synchronicity is compatible with Freedom is unclear. It must be compatible, because otherwise synchronicity means that God does not exist, because, to repeat, creativity and love do not exist without Freedom. The fact that there is evil synchronicity indicates that it must be fundamentally connected to Freedom in some way because from Freedom come both good and evil, and that is why some people reject Freedom. It is OK not to know. A system that explained everything would explain everything away. 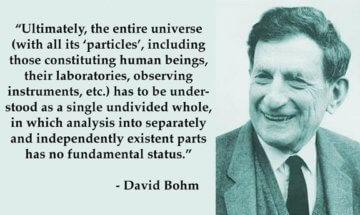 This quotation from Bohm that “Ultimately, the entire universe (will all its ‘particles,’ including those constituting human beings, their laboratories, observing instruments, etc.) has to be understood as a single undivided whole, in which analysis into separately and independently existent parts has no fundamental status” is utterly nihilistic. There are no Persons in Bohm’s universe. His view is objective and thus incompatible with Freedom. Freedom is interior and an intrusion of the noumenal world into the phenomenal world. How can I love my neighbor as myself if there are no neighbors and no selves? The supreme value of the man is because he is made in the image of God. Holism is hellish. 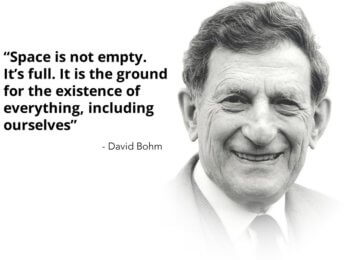 We better hope not.

Leisure the Basis of Labor