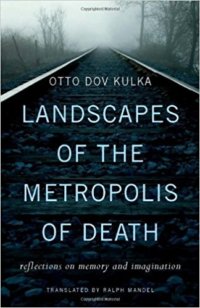 After surviving Auschwitz, Otto Dov Kulka, Rosenbloom Professor Emeritus of Jewish History at Hebrew University in Jerusalem, became a professional historian who divorced his personal experience from his work on Jewish history and European anti-Judaism culminating in the Nazi’s “Final Solution.” Until the publication of this book Professor Kulka remained silent about his personal experience, the result of a choice he “made to sever the biographical from the historical past.” He writes in the Introduction: “I am aware that, beyond the dichotomy that looms between my scholarly work and my reflective memory, this present book in itself reveals immanent tensions: a confrontation between images of memory and the representation of historical research.”(xi)

Landscapes of the Metropolis of Death, subtitled “reflections on memory and imagination,” is more a work of literature similar to Eric Voegelin’s “Anamnetic Experiments” than it is camp memoir. Kulka purposely remained silent about his camp experiences, but after a visit to Auschwitz in 1978 memories and dreams began coming to him and between 1991 and 2001 he made tape-recordings that permitted him “to describe the images that well up in my memory and explore the remembrance of what in my private mythology is called ‘The Metropolis of Death’, or in deceptive simplicity: ‘Childhood landscapes of Auschwitz’”(xi). He clarifies this claim when describing the structure of his book.

This book consists of ten chapters taken from these recordings, followed by three chapters of excerpts from my diaries, all from recent years. In their nature and themes these excerpts closely resemble the tape-recorded reflections. Where necessary, I have provided references, mainly for the sources of the quotations and names of persons. Similar to the language of the diaries, the tape-recordings are monologues… The hidden meaning of the metaphoric language of the central, recurrent motifs in the book, such as “immutable law of death”, the “Great Death”, the “Metropolis of Death”, reaches beyond the experience of the world of Auschwitz. They are metaphors for what at the time seemed to expand into a world order that would change the course of human history and remained so in my reflective memory. I am also aware that these texts, though anchored in concrete historical events transcend the sphere of history.[xi-xii]

This work—only 127 pages if one includes the Appendix, list of illustrations, and notes—must be read, and reread, slowly. I find that it is best to absorb this spiritually difficult work one or two chapters at a time; the chapters range in length from less than a page to three or four pages. “Absorb” is the key word here, for Kulka is attempting to articulate his existential experience(s)—experiences bubbling up from his dreams and memories—as mediated by reflective memories emerging almost forty years after the liberation of Auschwitz in January 1945. In order to experience, to understand existentially, his remembrances the reader must engage her imagination in a process of reenactment that in turn must be followed by periods of reflection and meditation.

The controlling metaphor, “The Metropolis of Death” is difficult to fathom and yet it permeates the entire book. For example, at one point Kulka “describes” a “public execution” in Auschwitz and his overwhelming experience of the perplexing order of that “Metropolis”:

“What I retain from this scene comes down to a feeling of a peculiar “justice” that resided in all this; a feeling that it was some sort of actualization of a perplexing “order” that overlay the camp’s everyday life. Victim and perpetrators, or the floggers and the lashes of justice to which the prisoner was sentenced, were as though one system, in which it was impossible to distinguish, to separate the victim from the deliverers of the punishment.”[44]

It is virtually impossible to convey the range, depth, and beauty of this book, but you will perhaps have a sense of its contents if I simply list selected subtitles of various chapters as well as the three titled diary entries:

It is impossible to convey fully the narrative beauty and courage of Kulka’s memories by describing the varied “contents” of his “reflections,” therefore I will close with a passage from the section Kulka entitles “The Blue Skies of Summer” in Chapter 8, “The Landscapes of a Private Mythology.” He writes:

“Another leap in time, to a different landscape and different colours. The colour is blue: clear blue skies of summer. Silver-coloured toy aeroplanes carrying greetings from distant worlds pass slowly across the azure skies while around them explode what look like white bubbles. The aeroplanes pass by and the skies remain blue and lovely, and far off, far off on that clear summer day, distant blue hills as though not of this world make their presence felt. That was the Auschwitz of that eleven-year-old boy. And when this boy, the one who is now recording this, asks himself—and he asks himself many times—what the most beautiful experience in your childhood landscapes was, where you escape to in pursuit of the beauty and innocence of your childhood landscapes, the answer is: to those blue skies and silver aeroplanes, those toys, and the quiet and tranquility that seemed to exist all around; because I took in nothing but that beauty and those colours, and so they have remained imprinted in my memory.”(75)

“[F]or that little boy who is part of that summer [1944], all this will remain for all time as a touchstone of beauty, nonpareil in all the landscapes I have collected into myself and which I will probably be able to collect—how to put it, in a phrase—for all time. I do not know how much longer I have until that ‘for all time’, but I have absolutely no doubt that to here I will always return.”(77)

Charles Embry is Professor Emeritus at Texas A&M University at Commerce. He is author of several books, including The Philosopher and the Storyteller (Missouri, 2008); Voegelinian Readings of Modern Literature (Press, 2011); and, with Glenn Hughes, co-editor of The Eric Voegelin Reader: Politics, History, Consciousness (Missouri, 2017).