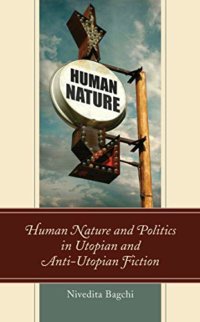 In Human Nature and Politics in Utopian and Anti-Utopian Fiction, Nivedita Bagchi examines the philosophical underpinnings of four well-known works of utopian/dystopian fiction: Thomas More’s Utopia, Edward Bellamy’s Looking Backward, Aldous Huxley’s Brave New World, and George Orwell’s 1984. Bagchi’s expressed purpose in this book is to illustrate each author’s understanding of human nature, and show how these understandings illuminate the political structures and behaviors found in the fictional societies depicted in each work. Bagchi distinguishes between thinkers (such as More) who assert a belief in fixed human nature, and those (such as Huxley) who view human nature as completely malleable. As an alternative to the view that “one person’s utopia is another’s dystopia,” Bagchi argues that “conceptions of human nature differ dramatically between utopias and dystopias and so does their outlook on the possibility of politics (Bagchi, xvii).” This alternative thesis will, hopefully, allow students of utopian and dystopian fiction to develop a comprehensive way of analyzing and categorize societies that could possibly be either utopian or dystopian in nature.

Bagchi’s book, while an enjoyable read, suffers quite seriously from its brevity. Aside from the introduction and conclusion, each of the four chapters is dedicated to a single work of fiction. Her insights into these works are entertaining, educational, and erudite. However, the reader is consistently left wanting more. Very little attention is paid to the philosophers who may have informed the views of the authors in question, or the philosophers whose thought could be better illuminated through these fictional portraits of politics in action. If these philosophical influences had been clearly drawn out, the book could serve as a valuable teaching tool for courses in both literature and political philosophy. As is, however, the book depends entirely on the reader’s knowledge to place the literary works into the larger corpus of political thought. The most intriguing part of the book is surprisingly the conclusion, which, rather than summarizing the themes and argument of the preceding chapters, introduces a wholly new discussion of Ursula LeGuin’s “ambiguous utopia”, The Dispossessed. Bagchi’s analysis of The Dispossessed is insightful and sharp – leading the reader to wonder why it was relegated to the concluding chapter instead of given a more comprehensive treatment.

The importance of the question of human nature to political philosophy cannot be overstated. Utopian and dystopian literature offers a valuable, vibrant means for bringing different conceptions of human nature to life, allowing the reader to see different theories in motion. Human Nature and Politics in Utopian and Anti-Utopian Fiction aims to elucidate the lessons of four important works of fiction, and provide a cohesive method for analyzing the genre as a whole. While it ultimately fails to fulfill its great potential, the book is certainly an enjoyable read, and quite persuasive in its analysis of the details of the fictional works each chapter addresses.

An excerpt is available here.