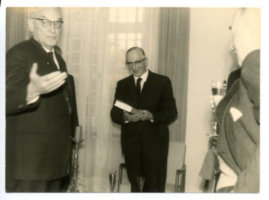 In Eric Voegelin: Philosopher of History Webb comments, of liberal conceptions of order in history, that they “overlook the transcendent dimension of the human project, but they notice the immanent one. They overlook the helkein, but they notice the reality and importance of zetesis” (Webb, 1981, 248). Yet I suspect that either liberal thinking is virtually pervasive in the West (it may be) or that this type of thinking is so common precisely because in our scientistic age it is so much easier, to the point of seeming natural, to feel our need to question, our personal zetema(s), as naturally directed toward the immanent, especially in an era when “science” still so readily denies the possibility of any kind of non-material actuality. I’m suggesting that our questioning nature is not really any kind of issue from any perspective: it is easy to acknowledge (unless one is choosing to be deliberately obtuse). However, to try and understand that “desire to know” as also drawn, and, furthermore, drawn by something like God, is a much more difficult concept to accept, certainly in our radically secular modern society.[1]

In his article Webb comments that “Voegelin’s modernity . . . has to do with the extent to which his own thought may have been shaped more in various ways by some patterns of modern thinking than he himself was probably aware.”[2] I think this is inevitably true (it is for all of us) but it may be a source of that curious disquiet that some religiously inclined contemporary interpreters of Voegelin’s work seem to feel, especially pertaining to his (lack of?) orthodoxy. Webb is right to point out the absolute centrality (indeed its “ultimacy”) of the concept of the metaxy in Voegelin’s work, to the extent that this can lead Poirier to accuse him of a kind of hypostatizing Arianism, especially, as Webb points out, when Poirier draws attention to Voegelin’s comment that the poles of the existential tension “must not be hypostatized into objects independent of the tension in which they are experienced as its poles.”’ For Poirier “this is conclusive evidence that Voegelin was an immanentist and an atheist.” Is this surprisingly uncompromising statement perhaps rather a manifestation of that contemporary inclination to (even unconsciously?) deny, or be fundamentally unable to accept the reality of helkein qua helkein i.e. free of all doctrinal or institutional “guarantee,” even to those not especially submerged in a scientistic culture, than forms of questioning perceived, again perhaps unconsciously, as automatic or even instinctive? Any hypostatization here would thus seem to be Poirier’s, not Voegelin’s.

Yet there is something curious here; a striking similarity to something  remarkably pervasive in our time: the persistent refusal/reluctance on the part of those who seem to consider themselves objective about these things to incorporate into their  understanding the full range of what science in our time seems to be saying (this does not, of course, necessarily refer to Poirier himself, but rather to the “climate of opinion” and especially to those manifesting  that “closed mindedness” that Voegelin associates with scientism.  Many of these omissions are a consequence of the tenaciousness of anachronistic Newtonian notions of physics which seem to overlook the implications of quantum theory and relativity theory, in particular those to do with the “fuzziness” of the material universe.[3]

The particularly interesting and rapidly growing field of consciousness studies would seem to be particularly apposite in this instance, especially the area of “substance dualism.” Now Voegelin’s writings do seem to manifest generally a rejection of Cartesian dualism that is very much of his time (an example perhaps of the kind of influence that, as Webb has acknowledged, even a Voegelin is not immune to). What we might call a kind of “Neo-Cartesian” substance dualism, however, would perhaps offer some kind of scientific evidence for the reality of helkein. Here it is essential to proceed very carefully ensuring that we stay aware of all the pitfalls immediately apparent that this course may hypostatise helkein itself, nevertheless some interesting suggestions may become, again with due caution, useable and relevant here.

For example, Richard Swinburne has asked whether it may be “logically possible that a person could continue to exist without a body at all?” (163). Swinburne suggests that it is. This is a complex argument that requires the fullest exposition, but for our purposes I would note that Swinburne’s argument involves a case for the logical possibility of the existence of pure mental events that do not supervene on physical events, thereby describing a relationship between the physical and the non-physical which goes far beyond any type of straightforward materialism.  He says, “that any mental event lasts for a period of time, and what makes it one event is that its two half-events are co-experienced by the same person. So a person can have successive pure mental events’ thus ‘the identity of a person is quite independent of any physical continuities (Ibid).” Now I have obviously been unable to do justice to the thoroughness of Swinburne’s argument, but nevertheless I hope that some of its potential for the present discussion will become evident.[4]

Tentatively it is something like this: it would seem difficult to the point of impossibility to deny the existence of the physical body, thus physicality is to all intents and purposes a fact (and one that Voegelin would have no problem with); but it is remarkably easy to deny the existence of anything non-physical (and here we are back to the roots of positivism and the whole history of the valorisation of perception over apperception which Voegelin has dealt with extensively). But what if there is now emerging in the “new” sciences, something like a “scientific” case for the reality of the non-physical (rather than “scientistic” denials of it) of which Swinburne’s ideas are just one example?

For, as Thomas Nagel has recently said, “If one doubts the reducibility of the mental to the physical, and likewise all those other things which go with the mental, such as value and meaning, then there is some reason to doubt that a reductive materialism can apply even in biology, and therefore reason to doubt that materialism can give an adequate account of even the physical world” (14). The question we would need to asked is how this could affect our interpretations of a thinker like Voegelin.

In the present discussion, for example, we would need to ask whether a relatively straightforward adjustment or “updating” of Voegelin’s understanding of (Cartesian) dualism may also contribute to counter the strategy of a critic like Poirier, by invoking aspects of what Webb calls “a Christian orthodoxy that has room for ways of thinking about God that are more commodious than Poirier’s” which may seem to imply some potentially dogmatizing (hypostatizing) orthodoxy in its presentation of Christianity, by identifying an approach which is both wholly “scientific” whilst also moving beyond the merely material at least into a “dual substance” with non-materiality. Or rather a single substance in which both the physical and non-physical are aspects of each other, rather in the way in which in the “tension of existence” the human and divine poles are seen as a kind of indexical continuum: a panentheism in which Being itself, Ipsum Esse, whilst remaining radically transcendent is also, in this typical limit-case of the reach of language/ symbols, paradoxically, but suitably “fuzzily,” present and absolutely separate.  Where, just perhaps, something like helkein could be understood as encountered in our necessarily corporeal lives in all its necessary, un-hypostatized, materially affecting non-thingness.

[1] Perhaps the feelings of many are expressed by Thomas Nagel who, speaking about himself, says, “I lack the sensus divinatus that enables – indeed compels – so many to see in the world the expression of divine purpose as naturally as they see in smiling face the expression of human feeling” (12). Nagel goes so far as to add, in a footnote to his self-observation, “I am not just unreceptive but strongly averse to the idea…” the idea which is, I suggest, virtually synonymous here with the notion of helkein.

[3] If we assume, as I think we can, that “fuzziness” is a kind of vagueness and, at least as far as quantum physics is concerned (and its concern with the fundamentals of the universe would certainly seem to be some kind of focus on at least one – the Apeiron or depth – of the poles of the tension of existence and, at least implicitly, to not deny the possibility of the other – the Divine) the concept of fuzziness is certainly mysterious and, as Peter van Inwagen has said, “vagueness is such a puzzling topic that who have banged their heads against it for extended periods have been heard to say some very startling things” (106, emphasis in original) then there would seem to be no obvious justification for anyone tout court, scientist or otherwise, to just dismiss consideration possibilities such as these which certainly exist at the boundary (balance) areas of our (metaxic) existence.

[4] To be sure this adds little to Maritain’s observation that “A soul which is spiritual in itself, intrinsically independent of matter in its nature and existence, cannot cease existing” (94) but it is what is regarded as the presupposition of spirituality that seems to be the key problem for those immersed in scientistic discourses.

Also see Eugene Webb’s “The Question of Eric Voegelin’s Faith (or Atheism?): A Comment on Maben Poirier’s Critique ” and  Maben Walter Poirier’s “Eric Voegelin’s Immanentism: A Man at Odds with the Transcendent.”

Steve Conlin is an independent scholar whose Master's thesis was on Hans-Georg Gadamer's "Truth and Method" from the University of Southhampton in England.

Eric Voegelin’s Leap in Being

Aristotelian Citizenship for a Multicultural World