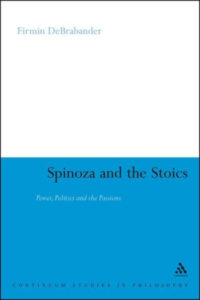 Spinoza and the Stoics: Power, Politics, and the Passions. Firmin DeBrabander. London and New York: Continuum, 2007.

Euthanasia and physician-assisted death is a topic much in the news these days. After the Supreme Court of Canada’s recent ruling, the Canadian government is busy with legislation overseeing such practices. Perhaps the viewpoint of an ancient school of philosophical thought, Stoicism, may aid contemporary reflections on the matter of physician-assisted suicide, especially since such a practice is being funded by the state, and the Stoics are famously the most public-spirited of the ancient schools.

The Enlightenment philosopher Baruch Spinoza was one of the first theorists of liberal democracy, and there is an interesting point of contact with him on this issue of physician-assisted suicide, which typically inflames the passions and leads to heated public discussions. In his book, Spinoza and the Stoics: Power, Politics, and the Passions, Firmin DeBrabander helps us appreciate an important scholarly point about Spinoza that we may previously have missed.[1]

For Spinoza, passions can only be managed by contrary emotions, not by free judgment or free will. But on this point, as we can surmise from his manner of expression, Spinoza is really opposing Descartes, and not orthodox Stoic doctrine.[2] So far, so good. But some additional questions present themselves after we learn from DeBrabander about the Cartesian context in which Spinoza is speaking and in which he must be interpreted. Cannot Spinoza’s position on the passions be harmonized with Stoicism? And could we not do this by pointing to use of the rational emotions as the authentic Stoic way to manage the deleterious effects of the passions, as Spinoza would have it?

On my view, formed after many years of reading ancient philosophy, for the Stoics, the eradication of the passions, rather than the management of the passions, seems to be only offered dialectically by the Stoics; i.e., it is offered as a paradox and is meant only to instigate philosophical discussion. That is, the purpose of the paradox, and the reason for which it is offered at all, is for commending the management of the passions to everyone who is not a Stoic sage. It seems reasonable to me, in other words, to regard Spinoza’s therapy of the passions as essentially Stoic, despite DeBrabander’s useful conceit of exposition in his book, which seeks to proceed by drawing contrasts between Spinoza and the Stoics.

Spinoza’s teaching that “reason bears emotive force” need not be contrasted with Stoicism, but may rather be seen as a legitimate variation on Stoic theory, in the same way that a practical Roman, like a Marcus Aurelius or a Cicero, adapts and refines Stoicism. Practically speaking, “the passions are insusceptible of complete control,” and so we must live with them as “part of the human condition,” at least inasmuch as we are not sages, and inasmuch as we are inevitably linked, by our place in society, with other social animals who are irrationally passionate.[3]

It is hard to insist on Spinoza’s theoretical divergence from Stoic doctrine on this matter, given that there is no practical difference in their respective lived attempts to manage the emotions. I think that there is also good precedent, given the many enumerated Stoic paradoxes,[4] to regard “total control of the passions” as simply one more Stoic paradox: i.e., as an invitation to begin the spiritual exercise of management of the passions, as an asymptotic approach to the sagely ideal. I myself would say that the so-called “Stoic” notion of extirpation and eradication is a hyperbolic ideal. (Regarding hyperbolic ideals, compare Matthew 5:30a: “And if your right hand causes you to stumble, cut it off and throw it away.”) That is, it is offered only as mental preparation, invoked only for helping people to deal with what they would ordinarily argue are “impossible” situations: e.g., being “on the rack” (as in the Stoic paradox that “the Stoic sage can even be happy when being tortured on the rack”).

Similarly, the so-called “Stoic” doctrine of “rational suicide” which Spinoza rejects is, on my view, yet another Stoic paradox, and is, like the “rack” paradox, designed for the exercise of mental preparation.[5] That is, it is meant as a spiritual exercise, to help one become (as much as possible) like that sage who could be happy “on the rack.” The “suicide” exercise’s paradoxical conclusion is, on this interpretation, meant to result in the rejection of suicide, because to choose suicide is to rank “preferred indifferents” (the Stoic term for things like health, wealth, etc.) above the virtue of a good will. In other words, the proper resolution of the paradox is to conclude that any present evil can be faced, because a Stoic can conquer anything internally, simply by becoming aware that he or she can choose to endure it.[6] On my view, then, when Spinoza rejects the so-called “Stoic” doctrine of rational suicide, he simply draws the appropriate conclusion to the Stoic spiritual exercise about suicide.

In any case, beyond the question of “rational suicide,” if we look to Spinoza’s wider philosophical orientation, DeBrabander recognizes that the critics of Spinoza seem to have a point about Spinoza’s essential overall similarity with the Stoics, since Spinoza “appears to arrive, like the Stoics, at an unabashed intellectualism, which would contradict the monism of his metaphysics.”[7] I would resolve this difficulty by saying that Spinoza’s monism is also a profound paradox: i.e., it is a brand of Stoic mysticism that catches sight of the deeper reality of primary causality at work beneath the secondary causalities of the universe.[8] Spinoza’s so-called “intellectualism” would then be an affirmation of the fundamental Stoic orientation towards increasing the sum total of all cosmic and social actualities in the universe, by means of pursuing the path of one’s individual rational actualization. And thus, to return to the particular matter, it is hard to see how an individual act of suicide could achieve this, given the social orientation of the human species. Notorious cases, like Cato’s suicide in response to his defeat by Julius Caesar, are to be seen, rather, as the difficult exceptions that only prove the general (truly Stoic) rule.

DeBrabander is right to observe that virtue for Spinoza cannot simply be right intention, and therefore Spinoza’s doctrine deserves an appropriate name, something along the lines of “vitalism.”[9] But this is also true of the Stoics, who also stress the vital duty of a human being to actualize the social project of the common good.[10] Otherwise, Marcus Aurelius would be able to rationalize sleeping in late, in order to selfishly cultivate a well-rested mind for private philosophical meditations, as if that would be the highest achievement of a human being. But in fact we know (from his actual written meditations) that Marcus rouses himself to get out of bed to do “the work of a human being,”[11] and also to look with disdain on books and merely theoretical philosophizing (because they can foster anti-social tendencies).[12]

In short, preoccupation with individual comfort is hardly the Stoic ideal. Spinoza’s clear rejection of the rationality of suicide is arguably the correct interpretation of the fundamental Stoic philosophical orientation. If an individual can take a stand and endure anything, then that would be the clearest illustration of how best to conduct one’s life as lived well. Moreover, unlike Caesar, a terminal illness is nothing that we can take personally, since disease targets us without regard to our political views, and so there seems to be even less of a case to be made for an early exit in that medical situation, even if one would wish to defend Cato’s own early exit as a justifiable act of political defiance. Perhaps, then, our own contemporary culture’s view of life and death can be informed by the courageous virtue of the Stoic position on suicide, provided that we let Spinoza and Marcus Aurelius, rather than Cato, school us in the proper interpretation of Stoic virtue.

This was originally published in The Imaginative Conservative on July 1, 2016.

In Defense of the Dignity of Politics: A Review of Tilo Schabert’s The Second Birth. On the Political Beginnings of Human Existence

John Locke on “The Reasonableness of Christianity”

The Incarnation of the Poetic Word