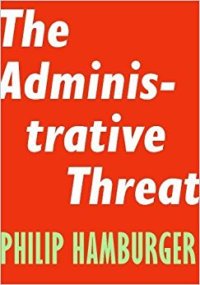 Readers of a certain vintage will recall a British TV series called Yes, Minister, in which a hapless cabinet minister, Jim Hacker, is continually bested by his wily, seasoned principal secretary, Sir Humphrey Appleby. Appleby’s particular genius is to advance the goals of the administration, and prevent incursions into it by parties and governments of day, while assuring ministers that the bureaucracy is executing their very will. At the end of each episode, Appleby intones, “Yes, Minister”, while smiling in triumph like a Cheshire cat. The deep state wins another one, and the elected officials are none the wiser.

Philip Hamburger’s trenchant essay – the book is a small paperback of 64 large print pages – is precisely about the same dominance of the administrative branch, substituting the series’ irony with barely disguised indignation. Hamburger’s book may be small but it is dense and forcefully argued. There are many reasons to be concerned about the administrative state and the creeping power of permanent civil servants: it puts a drag on economic activity and growth, it socializes risk, it enervates civil society, it drains the public purse, and its rewards mediocrity, and so on. Hamburger’s concern is different: the administrative threat is unconstitutional.

The American Constitution allocates legislative power to Congress and judicial power to the judiciary. The growth of legal obligation by administrative means, however, transfers both legislative and judicial powers to appointed officials serving in the executive branch. This is contrary to the text of the Constitution and the intentions of the Framers. They were preoccupied with prerogative power and associated the absolutism of the Old World with the executive’s resistance to any limits on this ample discretionary fiat. “How exactly,” Hamburger asks, “does the US Constitution bar administrative power? Most basically, the Constitution’s broad structures systematically preclude extralegal or absolute power. The revival of such power, whether called ‘prerogative’ or ‘administrative’, is therefore unconstitutional.” (21) It is a revival of the period prior to the Glorious Revolution. Thus the development of the administrative state is actually a “great lurch backward.” Those of the living constitution school, Hamburger, argues, who think the administrative state is progressive in fact take us to a time before constitutionalism.

The administrative threat takes several forms. Administrative agencies are given vague, general mandates by Congress. They make enforceable legal rules themselves. They issue authoritative interpretations of those rules. They adjudicate conflicts arising under them. They issue waivers, that is, exemptions from the application of the general rules to particular parties. In other words, they exercise legislative and judicial powers, powers given to Congress and the courts by the Constitution. While the authorities deny it, the administrative state proceeds by means of unconstitutional delegation of power.

If administrative tribunals safeguarded the panoply of procedural rights guaranteed by the Constitution, the threat would be serious, But the threat is worse than that. Property and other rights are adjudicated under relaxed standards of procedural justice, to which the courts, to their shame have deferred. Some laws permit governments to proceed either through courts or administrative bodies. In this way, rights are contingent, dependent on government decisions. This is a violence against American constitutionalism.

The Constitution, Hamburger notes, does permit the existence of some administrative power. Many administrative measures are concerned with the distribution of benefits rather than the creation of legal obligation. The former do not engage constitutional principles. State constitutions may also make explicit provision for administrative power. Local administrative measures as well as those that touch immigration are permissible. But the transfer of legislative and judicial power under the US Constitution to administrative bodies that then impose legal obligations is not permitted. It is tempting to characterize the threat as a form of usurpation. But Hamburger acknowledges that administrative agencies have power because Congress gave it to them. And they relax procedural rules with the courts’ blessing. So the agencies have not so much taken power from the other branches as they have been given it by them. The rot goes deep. Others have made the same observations about the expansion of executive power.[1]

Hamburger writes as if the mere knowledge of the unconstitutionality of administrative power will begin to reverse the tide. But he knows that this is not enough. At the end of his little book, he notes that the final guarantor of limited government is the “spirit of liberty”. “Ultimately, the defeat of administrative power will have to come from the people.” (64) What, then, is the condition of the people? Here Hamburger points to the big question for the American regime. Republic depend on the virtue of the people to maintain themselves. What if the people lose the taste for self-government? What if they want to be ruled, taken care of? In Democracy in America, Tocqueville offers the vivid image of the farmer willing to have the state take his place at the plough. Jefferson stands down and Mustafa Mond steps up. If the people really do not want to assume the responsibilities of self-government —  independence, self-restraint, delayed gratification, and deliberative skill – then they will gravitate to German ideas of law and absolute legal authority that assume that people cannot in the end rule themselves.

Hamburger is not ready to give up the fight. For him, the problem is the “knowledge elite” that has expanded the administrative state to shield governmental power from the people. Hamburger suggests that two major development since the Civil War – the expansion of voting rights, and the expansion of administrative power — are related. As more Americans became voters, the elite became more concerned. “Although equality in voting rights has been widely accepted, the resulting democratization of American politics has prompted misgivings. Worried about the rough-and-tumble character of representative politics, and about the tendency of newly enfranchised groups to reject progressive reforms, many Americans have sought what they consider a more elevated mode of governance.” (54) The knowledge class is a homogeneous and homogenizing groups, dedicated more to “cosmopolitan knowledge” than “local connectedness”, whereas the people favor the latter over the former. So enfranchisement is met with administrative growth, the removal of political power from the institutions influenced by the people. More voters means less democracy.

Hamburger’s is a voice in the wilderness. Such voices are often the clearest and most candid. It is a call to return to the letter and spirit of the Constitution. Fair enough. While Steve Bannon’s truism that politics is downstream from culture[2] over-simplifies the point, it is true enough to give pause to those who believe you can change hearts merely by changing laws (or changing judicial decision making). I add that even written constitutions work by means of unwritten conventions and norms.[3] Unwritten constitutional rules are enforced not by courts but by public opinion. Norms change when the tolerances of the people change. In this sense, the spirit of liberty is very much in play when we discuss the administrative threat. when Hamburger indicates at the end of his book that it all depends on the people and their fidelity to constitutional principle, he implicitly concedes that the American Constitution is more than legal text; it is a set of fundamental rules and norms embedded in the souls of its citizens. The rise of the administrative state may be an indication of the state of the American soul.

Tom Bateman is Associate Professor and Chair of Political Science at St Thomas University in Fredericton. His teaching and research interests are in constitutional politics, the Charter of rights, and religion and politics.