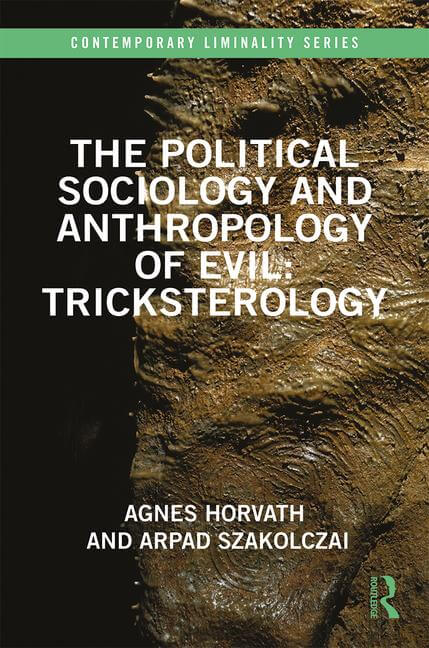 This book is explicitly presented in its preface as a tentative essay, and it is very much an “essay” in the original meaning of a fresh attempt with a different approach. The book attempts to produce a very distinctive analysis of evil, veering away from Enlightenment ideas of evil as ignorance or critical ideas of evil as domination and oppression, towards an explanation which relies on the anthropological figure of the Trickster. Yet, as a contribution, the book builds on decades of thinking about the trickster, as evidenced by previous books and articles, but this is the first sustained and elaborate monograph length exposition focusing on the trickster from the authors. While many anthropological concepts have a trans-disciplinary reception – for instance, liminality, gift, sacrifice and so forth, the idea of the trickster has been thus far, with some notable exceptions, neglected by mainstream social science.

To understand the term “tricksterology” the anthropological figure of the “trickster” must be examined, as the authors do, mainly through the works of Paul Radin, but also through Evan-Pritchard’s classic works on magic. The “trickster” is a nigh-upon universal folk-figure, an outsider inclined to ambivalence, transgression, creativity, a creature of hybridity and twilight – such as Loki, Hermes or the folk figure of the Leprechaun. Typically, modern sensibilities tend to heroize this figure as an alternative to order, yet for the authors, the dangerous qualities of the trickster are to the fore – the capacity of tricksters to dissolve all boundaries and distinctions, leading to chaos. In brief, the specific “evil” of the trickster is that they violate – human, cultural, social distinctions are breached and negated, so that the difference between night and day, poverty and progress, human and animal and good and evil disappear.  Folk myths, legends and religious wisdom all warn against this danger, but are largely ignored in the modern world.

Connecting the figure of the trickster to the question of evil is a crucial task within this book, and initially this is quite counter-intuitive, as the trickster is not “daemonic” in the typical sense of being a powerful, oppressive, controlling tyrant, marked by strength and the threat of violence. Indeed, the authors stress that tricksters are characterized by isolation, weakness, stupidity, almost a lack of any real qualities at all. Yet, perplexingly, tricksters are able to take advantage of situations, opportunistic and cunning, setting off processes or chains of events which might seem innocuous at first, but eventually become extremely pathological. As they are unconnected to community, devoid of emotions, tricksters have the capacity to be ‘rational’ or ‘think outside the box’, but thereby let the genie out of the bottle. Thus, the authors’ concerns extend beyond the anthropological or folklore studies of trickster figures to attempt to identify trickster logics.

Following this path the authors first examine the Zande spider trickster as in the classic work of Evans-Pritchard, both in his initial fieldwork and latter reflections. Here, the obsession with Witch-craft or sorcery in Zande culture is positioned not just as one form of culture among many, but an exemplar of a trickster logic; all bad fortune must be explained as caused by certain forces, and therefore, when things cannot be explained, accusations of witch-craft inevitably arise, which produce suspicion and conflict which turn out to justify the initial diagnosis. After all, evil-doers would be bound to protest their innocence! Curiously, the witch-doctors of the Zande are not high-priests or any form of elite, but a shady cult, where novices must suffer to be initiated into the secret mysteries. Yet, their promotion of fears of witch-craft manages to disempower and entrap the whole community. Modern parallels could be made to economists, whose predictions are as unreliable as any sorcerers, but always manage to explain bad fortune in their own terms, or whole fields of psychological or psychiatric disciplines which always manage to find pathologies which need to be addressed relentlessly.

However, unlike most contemporary commentators, the authors are less concerned with decrying the contemporary ills of modern life than in reconstructing the traces of trickster logics across a vast canvas, from the neolithic to the present. Later sections delve deep into pre-history, to cave art and rock art representations of the trickster, through to troglodyte structures in Kaymakli and the artificial construction of caves in catacombs up until ancient times, or perhaps even more recently. These sections build on the authors’ previous work Walking into the Void which traces the decline yet persistence of archaic “walking-cultures” through archaeological remnants, from the beauty of caves like Lascaux to the bewildering absurdities of the Tassilli rock-art to Gobekli Tepe and the fitful emergence of settlement and agriculture. Against the primary association of these developments with progress and civilization, the authors diagnose this as a trickster logic, whereby autonomous human life is gradually compromised for the sake of growth and security, transforming society and the individual entirely. These pre-historic elements are traced in the second section of the book, which relates Trickster logics to modern perspectives which assert that all reality is in flux, composed of mere cells or atoms, where all can be recomposed and transformed through alchemy which projects the void, or nothingness to all reality.

Before exploring this idea of alchemy at greater length, we return here to the first section, to two chapters which are of especial interest for Voegelin View, as they concern Plato and the Sophists and the theological cosmology of Vedic Hinduism.

In their analysis of the Theaetetus it becomes clear that the problem addressed by this book is not simply a matter of identifying specific tricksters, but of discerning the trickster-logic at play. Evidently, many sophists had the character of Tricksters, wandering, isolated, homeless, able to sell their skills of rhetoric on the open market, able to argue that black was white and vice versa, and also that there is no truth and no distinction. Yet, these are often also concrete individuals with some degree of good character, the problem is more that they have been overwhelmed or infected with a kind of trickster logic, which incrementally spreads further through Athens. Specifically, in Theaetetus, the philosophical ideas of Heraclitus are pushed beyond their limit, not just insisting that matter is in flux because it is formed historically, but that because things change, grow and decay, that there is no firm reality to anything, all is in flux; the world, reality, individuality – all these things are illusions of stability. How this tempting idea has shaped the modern world, through banal social constructionism to the supposed opposites of liberalism and socialism is only hinted by the authors, but the replication and adaptation of these trickster logics is extraordinary.

From philosophy the authors move on to theology, examining Vedic Hinduism in depth – and forestalling anachronistic charges of “Orientalism,” they make connections to Nietzsche’s diagnosis of the problem of world-rejecting nihilism in the figure of the ascetic priest. Acknowledging that the study of the Vedas is a labyrinth, the authors trace the insinuation of a problematic cosmology within the Vedas, diagnosing life itself as fundamentally a debt, a guilty imposition on the world, of being as sinful in itself. This is expressed practically in prohibitions on meat, the idea that killing of any sort whatsoever creates a debt, producing a guilty self-consciousness. For the authors, this is a trick which spirals out of control, so that humans who evolved as omnivores become entrapped in a cycle of self-suspicion, the mistrust of one’s own motives, emotions and actions. Self-denial and self-sacrifice emerge from this, a whole Gnostic world-rejection, which becomes parasitically attached to the history of religion, from ancient to modern times. These ideas are familiar to any readers of Voegelin, but what the present book particularly highlights is that the whole process begins with tricks which are initially absurd but run amok over time; the idea that the human is separate from nature, the assumption of guilt and debt for living, the pursuit of self-sacrifice and discipline as an endless search for salvation. None of this makes sense except in the trickster logic which renders life itself as a problem.

While the Vedas are the most archaic traces of tricksters beyond the archaeological record, the most recent instance of trickster logic discussed at length in this work is the practice of alchemy, both in the classical and medieval world. While alchemy is commonly associated with outdated and unscientific ideas, the principles within it are what matter here, and distinctly reflect a trickster logic. Firstly, alchemy is concerned with breaking down things which occur naturally, most obviously physical things, reducing stone to metal ore to be forged into any number of shapes – equally, clay or concrete in the contemporary world. Secondly, alchemy is oriented to transforming and reforming, rendering forth a limitless quantity of hybrids and new constructions. Thirdly, alchemy proceeds on the assumption of the void, the emptiness of space, devoid of qualities or characteristics, an abstract world. More importantly, alchemy is oriented to the transformation of society and individuals, breaking people and communities down in order to serve different instrumental purposes. De-structuring, dissolving, liminal processes are employed to reduce real communities and traditions to malleable substances which can be reformed easily. A ‘technical’ approach which may seem rational on occasion here begins to take over, rendering the entire universe and human existence itself open to projects of reconstruction without limit. While the authors refrain from pointing out the myriad modern applications of these alchemical processes, readers can easily see them, from psychometric tests and training in workplaces to algorithmic surveillance through social media leading to targeted messages.

As pioneers of an emerging field of inquiry, Horvath and Szakolczai offer a trail-blazing diagnosis of modernity and evil in terms of the trickster which inspires thought and rumination. Rather than focusing on contemporary tricksters, for instance, Trump or Putin, they attempt to clarify the trickster logic that extends far behind such buffoonish or devious politicians, beyond political spin-doctors and entourages to deeper and societal wide problems and pathologies. Perhaps for some readers the lack of an extensive commentary on contemporary problems may seem to be a regrettable omission or a missed opportunity, but even that would be beside the point, or perhaps even a “trickster logic” of proving a point. Many works generate their own terminology, then relentlessly describe contemporary scenarios using it, then claim to have ‘discovered’ the essence of the contemporary. By contrast, this work allows its readers to contemplate the idea of the trickster which is not new, but a wisdom shared throughout humanity which has unfortunately been largely forgotten and neglected. Thus, either we recognize the trickster games we have been raised within and each enticed into, or we do not.

Tom Boland is a Senior Lecturer in Sociology at the University College Cork in Ireland.

The Truth about Plato’s “Noble Lie”

Docilitas. On Teaching and Being Taught