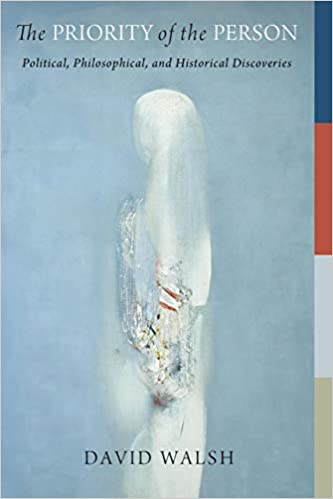 Please join David Walsh and John von Heyking next Friday, May 7 (2pm ET), as they discuss his latest book, The Priority of the Person. Details below and Zoom registration required. https://ihe.catholic.edu/events/the-priority-of-the-person/

IHE Fellow David Walsh, Ph.D. in Government, is an Ordinary Professor of Politics at The Catholic University of America. His teaching and research are in the field of political theory broadly conceived. His focus has been on the question that the modern world poses for itself at its deepest level: does our civilization possess the moral and spiritual resources to survive?

John von Heyking is Professor of Political Science at the University of Lethbridge, in Alberta, Canada, where he teaches political philosophy and religion and politics. He is author of Augustine and Politics as Longing in the World (2001), and coeditor of Friendship and Politics: Essays in Political Thought (2008) and Civil Religion in Political Thought (2010), as well as two volumes of The Collected Works of Eric Voegelin. The topics of his scholarly articles include friendship, cosmopolitanism, liberal education, multiculturalism, empire, civil religion, political representation, citizenship, republicanism, just war, Islamic political thought, leadership, America as ymbol, and religious liberty in Canada. He is currently at work on a book-length study on the political significance of friendship.

IHE Fellow V. Bradley Lewis specializes in political and legal philosophy, especially in classical Greek political thought and in the theory of natural law. He holds a B.A. from the University of Maryland and a Ph.D. from the University of Notre Dame. He has published scholarly articles in Polity, History of Political Thought, the Southern Journal of Philosophy, Philosophy and Rhetoric, Communio, the Josephinum Journal of Theology, the Pepperdine Law Review, the Oxford Journal of Law and Religion, and the Proceedings of the American Catholic Philosophical Association, as well as chapters in a number of books.  He is currently working on a book project provisionally titled “The Common Good and the Modern State.” He is also a fellow of the Institute for Human Ecology and serves as associate editor of the American Journal of Jurisprudence.