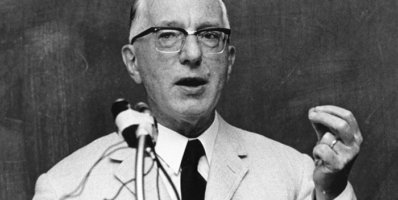 Eric Voegelin’s work is not well known outside a relatively small group of academics and their students. Yet within this domain Voegelin’s influence is impressive. His work has inspired a growing secondary literature and his political philosophy has been applied to a variety of topics in a broad range of academic fields. His philosophy of history and philosophy of consciousness have influenced the work of thinkers who are significant in their own right. Among these are Gerhart Niemeyer, Flannery O’Connor, David Walsh, Marion Montgomery, Russell Kirk, James L. Wiser, Ellis Sandoz, Dante Germino, and Jürgen Gebhardt. Further evidence of Voegelin’s influence is the creation in 1987 of the Voegelin Institute at Louisiania State University and the establishment of the Centre for Voegelin Studies in the Department of Religions and Theology at the University of Manchester. But while Voegelin’s work has influenced several first-rate scholars, his political theory has not found its way into the broader culture.

Faced with widespread and profound cultural, social, and moral decay, Voegelin theorized that the West had lost its consciousness of certain historical experiences vital to the formation of political, social, and existential order. In Voegelin’s terms, historical experiences and their corresponding language symbols illuminated the truth of reality. Language was necessary to articulate “experiences of order” and preserve them over time, since such experiences were rare. The truth of existence embodied in experience was an ordering force because it attuned the open soul to the Agathon (the Good). And a just political and social order, like the just soul, is dependent on this sort of attunement. Unfortunately, historical experience cannot have an ordering effect if the language symbols that preserve it lose their original meaning, as occurs when they are transformed or obscured by ideological movements. Such movements act to detach language symbols from their engendering experiences.

To regain consciousness of the engendering experiences — and in turn to restore social, political, and existential order—the philosopher must “reactivate the engendering experience in his psyche” and “recapture the truth of reality living in the symbols.” In particular, the language symbols of myth, revelation, history, and especially philosophy must be restored to luminosity — that is, reattached to the historical experiences that they attempt to convey—before rational discussion of the questions of order can occur. This recovery of meaning requires the philosopher to recreate the experience imaginatively in an act of meditation and to create “reflective symbols” that articulate the truth of the “original symbols.” This understanding of the modern crisis as a loss of consciousness of symbols and experience helps to explain why Voegelin turned to the philosophy of consciousness in his later work.

Contemporary usage of the word “philosophy” illustrates the consequences of detaching language symbols from their engendering experiences. “Philosophy” has become, in common usage, to mean the same as “ideology” or “value system.” But philosophical clarity depends on distinctions such as that between philosophy and knowledge (episteme) on the one hand and ideology and opinion (doxa) on the other. The contemporary use of philosophy and ideology as synonyms implies, for instance, that the philosophies of Plato and Aristotle should not be regarded as truth-claims about reality, but simply as two ideologies among many that individuals are free to choose based on their personal preferences or political interests. The political implications of the symbol “philosophy” becoming opaque are evident in the emergence of “spin doctors,” a character type that Plato classified as philodoxers (lovers of appearance and opinion). Their intentional distortion of reality erodes the ability of individuals to see life for what it is. Modern philodoxers draw their arguments from the common misconception of the day. In such an environment politics is not a search for either truth or the foundation of order based on that truth. Politics is rather a power game played by philodoxers who sell their opinions with a Sophistic understanding that what matters is merely power, not truth. This context makes it difficult to establish the existence of truth (aletheia) about reality, particularly transcendent reality. Indeed, references to an objective reality are now usually met with deep existential and intellectual skepticism, if not complete intolerance. Voegelin classifies this reaction to philosophical insight as “narcissistic closure.” He believes that it is characteristic of the spiritual alienation and estrangement of modern man. Meaningful discussion cannot take place under such circumstances because the preconditions for rational debate do not exist.

Because important language symbols have lost their meaning, Voegelin found it not only necessary to restore the original meaning of old symbols, but also to create new terms to explain philosophical issues. Examples of Voegelin’s new symbols are “logophobia” (fear and hatred of philosophy) and “pseudological speculation” (nontheoretical speculation — speculation that is closed to aspects of reality because of adherence to rigid ideological preconceptions such as that seen in “spiritually diseased” thinkers like Karl Marx). Voegelin created these terms to explain the spiritual depravity that engenders ideological systems. The creation of new terms and concepts was a necessary part of creating or restoring a new science of politics, the science of classical political philosophy, which was able to effectively analyze and diagnose the modern crisis. The combination of unfamiliar philosophical terms and neologisms opened Voegelin to the charge of being pedantic or esoteric. But he was neither. Upon careful study of Voegelin’s political theory, it becomes clear that the use of unfamiliar philosophical terms and neologisms was warranted by the nature and context of his political philosophy. Penetrating to experiential meaning and the truth of reality in an age of deforming ideologies required the reactivation of the meaning of symbols that articulated the experiences of reality, and the creation of new ones to describe complex philosophical problems. Voegelin was not being intellectually vain in his terminology; he was attempting to genuinely describe reality and to restore political science.

Diagnosing the Western crisis requires the creation of a philosophical framework that can identify the sources of disorder and penetrate to their spiritual causes. This effort gave rise to Voegelin’s “new” science of politics. His approach was new in the sense that it was a radical break from the dominant ideologically driven methodologies of his day. Yet it was old in the sense that Voegelin’s conception of science was a return to the classical approach of Plato and Aristotle. This reconstituted approach to scientific analysis was necessary because of the existing state of scholarship in the twentieth century. Ideologies like positivism place methodological demands on scholars that make it impossible to accurately diagnose the ills of the Western world. These ideologies are inadequate because they are philosophically closed to the complete scope of reality — that is, their methods and presuppositions prohibit theoretical analysis of questions regarding transcendent reality. Ideologies are obstacles to scientific and scholarly analysis of the modern crisis and indeed are part of the crisis itself.

Reawakening Western consciousness to the experiences of order that are the very substance of civilization demands an open and complete search for the divine source of order. This process of remembrance (anamnesis) suggests that the truth of experiential reality has not been lost forever but rather lies dormant in the Western mind, waiting to be imaginatively aroused by a spiritually sensitive soul. Voegelin’s philosophical framework attempted to break down the ideological barriers to the search for order and the recovery of transcendent consciousness, which is why he devoted a significant portion of his scholarship to the problems of ideology and methodology. It is also why he rejected doctrines of order (as opposed to the philosophy of order) and why he devoted so much of his effort to the openness of the search (zetema). Voegelin’s political philosophy illuminated a path; it embodied the spirit in which the search for the transcendent source of order should be conducted; it did not create an ideological system, political program, or social doctrine. The primary objective of this political philosophy was not to recover historical information but to recover an understanding of the process by which man becomes conscious of transcendent-divine reality.

This was originally published with the same title in The Imaginative Conservative on December 27, 2017.