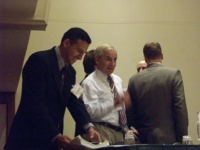 Professor Thomas Hollweck, 68, has passed away after a long illness.

A student of Eric Voegelin in Munich, he came to the United States and made his life here as a scholar of literature, culture and politics.  He was one of the four members of the Editorial Board that oversaw publication of the Collected Works of Eric Voegelin and he himself edited three of the volumes.  He had been chairman of the Department of  Germanic Languages and Literature at the University of Colorado, Boulder.

Thomas succumbed to cancer and hepatitis. He is survived by his son and grandchildren.  He will be fondly remembered by his many students and friends. A Mass of remembrance was offered on Friday, March 11, at St. Martin de Porres Catholic Church, Boulder, Co.  In lieu of flowers, donations may be made to the Hepatitis Foundation International.  Requiescat in pace