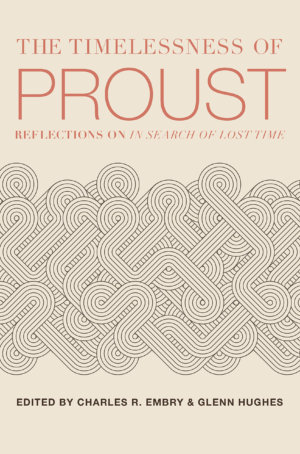 This volume offers a philosophical-spiritual viewpoint that complements with its insights the masses of literary studies published on the work of Marcel Proust for over at least a hundred years. Much of it focuses on the narrator and character’s personal experiences, named in the novel impressions bienheureuses (happy impressions), whose distinctive feature is that they dissolve his sense of time. For all the authors that contributed to this volume, these experiences mark out a space of a lived timelessness that is also one of spiritual fullness. The starting point of the study is the idea that Proust’s work influenced Eric Voegelin’s theories of consciousness and human development. The introduction cites “periodic comments” Voegelin made on Proust over a period of sixty years as a measure of this influence, adding that Voegelin’s Anamnesis clearly follows Proust’s lead in showing how “childhood experiences ‘determine’ the concerns of adult consciousness” (xv). Given Proust’s influence on Voegelin, the editors claim that it is time to reconsider Proust from a Voegelinian perspective. Accordingly, the six chapters that make up the volume focus on the themes of consciousness, reflection, self, memory and love, with the aim of understanding how, following Voegelin, the experience of time and timelessness is narratively construed in Proust in terms of a personal and spiritual transcendence.

The first chapter details the “biographies of consciousness” that emerge from the series of distinct impressions, rendered here as “blessed” impressions, which unexpectedly occur in the narrator’s daily existence (the cake called the “madeleine,” the hawthorn bush, the hammering noise of water in the pipes). These impressions serve to immobilize time around a singular sensation (sight, taste or hearing), triggering memories and thoughts in the narrator who relates them in long, weaving sentences. Having noted the distinctive quality of novelistic writing for the understanding of philosophical concepts, the author Charles R. Embry highlights the similarities between Proust’s treatment of the sense impressions and Voegelin’s theory of “reflective distance” from the point of view of consciousness as a process of development that begins with childhood. He also introduces the notion of a predisposition of openness that marks the narrator’s self-analysis, an openness that extends to the kind of participatory reading that the novel invites its readers to adopt.

Chapter 2, “Proust, Transcendence and Metaxic Existence,” is a strongly argued piece that presents Proust’s “metaxic” vision, that is, the experience of existing both in the time of ordinary experience and outside of time. The author Glenn Hughes discusses the mystical qualities of such experiences before asking why in Proust they are never attributed to God (as is the case with Voegelin), particularly given that Proust’s language sometimes hints at a divine presence. Proust, he opines, lacks the openness of mind for the acquisition of such faith, as is evident in his inability to love outside his maternal circle and his lack of a sense of justice and moral responsibility towards others. There is no doubt that Proust’s narrator is individualistic in his approach to life and that he has a resolutely secular outlook, but these are as much the cultural traits he shares with other members of his class as a simple matter of psychological disposition. The Dreyfuss affair, in fact, sparked a deep awareness of humanist principles in France at the turn of the twentieth century, leading to the enshrining of secularity at all levels of public life. It is also useful to note the taste for luxury and idleness that characterized the High Bourgeoisie at a time when, financially, they could still live comfortably on their cash savings.

Chapter 3, “The Normative Flow of Consciousness and the Self: A Philosophical Meditation on Proust’s In Search of Lost Time,” concentrates on the seductions of mystery in Proust and indeed marvels at the novel’s ability to take its readers to the outermost limits of human sensitivity and knowledge. After noting the rise of Phenomenology in the early 20th Century and the view of consciousness it advanced, the author Thomas J. McPartland discusses the themes of nature, art and love insofar as they constitute an “ontology of consciousness.” In his treatment of consciousness in its narrative form, McPartland regrettably neglects to distinguish Proust’s discursive rationalizations, which are heavily reliant on comparison and analogy, from the stream of consciousness style of narrative such as one finds in James Joyce. Furthermore, in claiming that the characters are portrayed only in their pure presence, it is possible to lose sight of the role of humor and satire in the descriptions of many of the characters and in its stinging account of the foibles and perversions of the upper classes.

The fourth chapter is an insightful piece that focuses on the middle volumes of Proust’s work, namely those that recount the narrator’s relationship with Albertine. The turbulence of this relationship must be regarded, the author Paulette Kidder states, in light of Voegelin’s account of the tensions that inform man’s relationship with the fullness of experience. These tensions are characterized by the closure of mind that brings about a misinterpretation of love and a mistreatment of the individuals one loves. However, the rediscovered, regained time that appears in the final volume of Proust’s novel corrects the narrator’s excesses, putting him in touch with the fullness of experience while re-igniting his literary vocation. But this entails a relinquishing of control and an acceptance of pain and suffering as a condition for the renewal of his capacity to write. This reading, informed as it is by the psychology of love, ends by asking whether the narrator finds here a way to redeem lost love as well as to recover his literary vocation. Or is lost love the price he must pay for his literary vocation? The problem is resolved here, temporarily at least, by the narrator’s apparent readiness at the end of the novel to take a “transformative step toward living in the painful and joyous unresolved tension and openness of existence” (88).

Chapter 5, “Proust’s Luminous Memory and L’homme éternel: The Quest for Limitless Meaning,” is a lengthy gloss that covers the topics of sleep, time, memory and art, all within a framework that presents the novel essentially as an investigation into philosophical truths. From the outset, it asks: Does the narrator actually attain the insight he seeks? (120) Has he received Truth? (121). The author Michael Henry argues that the search for transcendence stops short of achieving the ultimate goal of “participation in a Reality that entirely transcends our time-bound world” (121), for despite the quest to attain timelessness it remains anchored in the world of memories, sensations and analogies to an almost obsessive degree, and right to the end. Proust’s materialism is presented here in terms of his debt to the philosopher Henri Bergson. Indeed, his entire literary enterprise is a response to the challenge that Bergson put to philosophers and writers when he asked them to examine the experience of time in its own right, and not by means of abstract constructions and conventional thought systems, which relate more to space. The chapter’s timely engagement with Bergson’s theories of time leads it to posit in Proust “a consciousness made luminous by participation in a Reality that entirely transcends our time-bound world” (123).

“Unsought Revelations of Eternal Reality in Eliot’s Four Quartets and Proust’s In Search of Lost Time,” the sixth and concluding chapter by Glenn Hughes, presents a systematic comparison of Proust and T. S. Eliot based on their respective treatment of the specific sense experiences in which consciousness is put in touch with an “eternal time.” The carefully structured analysis signals the many similarities in the literary accounts of time and timelessness in the two writers, but identifies also some differences, noting especially the religious proclivities of Eliot as opposed to the artistic focus of Proust. In doing so, it raises a question that, for this reader, remained implicit throughout the volume, a question hinted at but never explicitly formulated in the previous five chapters. To wit: Is Proust using art to reach a transcendent reality or is he exploring the dual dimension of time and timelessness as a means to produce a work of art? Does Proust ultimately seek spiritual completeness or literary glory? The comparison with Eliot tends to suggest the latter, which in effect brings to this volume a balance in the treatment of Proust that might not have been possible otherwise. The volume thus acknowledges the importance of an aesthetic conversion, but without renouncing its convictions that a spiritual reading of Proust is possible and indeed fruitful.

As the introduction states, the connection between Voegelin and Proust is a trigger for reflection and not an object of analysis in its own right. This is to say that its treatment of timelessness can stand independently of the references to Voegelin, notwithstanding the fact that all of the contributors are familiar with Voegelin’s work. The absence of references to cultural and literary history is compensated firstly by its focus on the famous sense impressions, the impressions bienheureuses, a focus that ensures the volume’s coherence, and secondly by the contributors’ willingness to offer a comprehensive analysis that covers the entire six-volume work. In conclusion, the spiritual perspective is one that departs from the common view of Proust’s work as the account of an essentially aesthetic conversion in which a would-be writer seeks a literary method and style for transforming the vicissitudes of life into a timeless work of art. Without directly opposing the divine and the aesthetic, the volume demonstrates that many of the crucial episodes in the novel present a transcendence that also has a personal and spiritual dimension.

Peter Poiana teaches French language and literature in the School of Humanities at the University of Adelaide in Australia. His field of research is 20th Century French Literature and Comparative Literature, with a recent focus on the study of modern and contemporary poetry.

The Problems Are Everlasting, the Bard Indispensable

The Anthropology of Intentions: Language in a World of Others