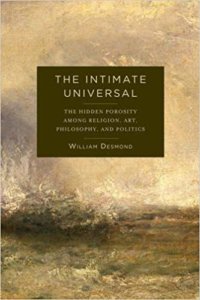 One tradition in western philosophy is the universal – a public space for thought, a communal forum for negotiating conflict, a neutral intermedium for science – and is represented in the works of the likes Plato, Aristotle, nominalists, and idealists. A counter-tradition is a rejection in the universal, often seen in the postmodern critics of the Enlightenment who decry the pretension of the universal to mask particularity, difference, and diversity. In The Intimate Universal, Desmond navigates between these two traditions where he identifies religion, art, philosophy, and politics as essential and distinctive modes of human practice, a manifestation of what he calls “intimate universality.” Rejecting the binary choice of the universal or the particular, Desmond’s intimate universal is a metaxological concept that balances between universality and particularity, the abstract and concrete, indeterminacy and determinacy, transcendence and immanence. Like Voegelin, Desmond believes we are creatures who live in a state of tension, the in-between, of different realities of which we are part but cannot be reduced to a single one.

Chapter one focuses on religion because religion offers a perspective of the whole of reality. The religious person exists in the in-between the universal and the particular: one finds meaning in particularity but also aspires beyond one’s particularity in search of a universal salvation. In this chapter Desmond contrasts the ghetto and the cosmopolis, the Greek and the German philosophers, Hegel and Kierkegaard to understand the intimate universal and how religion, particularly Christianity with its personal God, allows a person to navigate between these extremes.

In the second chapter Desmond examines art and its power to touch us in both a particular and universal way. A person encounters art in a particular manner, such as in self-creation, but the aesthetic intimacy radiates beyond that particular relationship to something universal. Employing Hegel, Kant, and Nietzsche, Desmond discusses this paradox about the aesthetic intimacy not being universal yet continues to strive for it. He explores how art, music, and theater manifest this dynamic of the intimate universal in their performances.

Exploring how “doing justice” is prior to philosophizing itself, Desmond shows how engaging the philosopher in the particularity of life while attempting to discover the universal in his or her thought is part of the intimate universal. In chapter three Desmond employs Spinoza, Socrates, and some of Shakespeare’s characters as examples of individuals practicing justice prior to philosophizing (interesting, Levinas is not invoked here, although Desmond does refer to him later in the book). To do justice requires not only the virtues of prudence and patience but also sovereignty over oneself, which leads into chapter four, which pays attention to politics.

Chapter four attempts to recover a metaphysics in modern politics so that the local citizen can partake in the universal (cosmopolitan). Desmond favors a politics that cares for the other which makes citizens resistance to nihilism and shows them that politics is not the ultimate universal. Religion, art, or philosophy rather than politics provides a universal aspiration for the citizen and thereby avoids absolutizing politics as an immanent, universal activity.

The Intimate Universal is the culmination of Desmond’s thinking about religion, art, philosophy, and politics and how these activities are related to one another and reveals the “porosity of being”: how reality is receptive to creative possibilities to actualize the true, beauty, and good in life. Reconciling the two dominant strands in western philosophy of the universal and the particular, Desmond demonstrates that people live somewhere in-between and our account of life should be reflected as such. Profound and insightful, The Intimate Universal provides us a path to think about religion, art, philosophy, and politics in a unique way that is both arresting and moving.

The Defenders of Liberty: Human Nature, Individualism, and Property Rights

Etty Hillesum and the Flow of Presence

The Laws Most Beautiful and Best