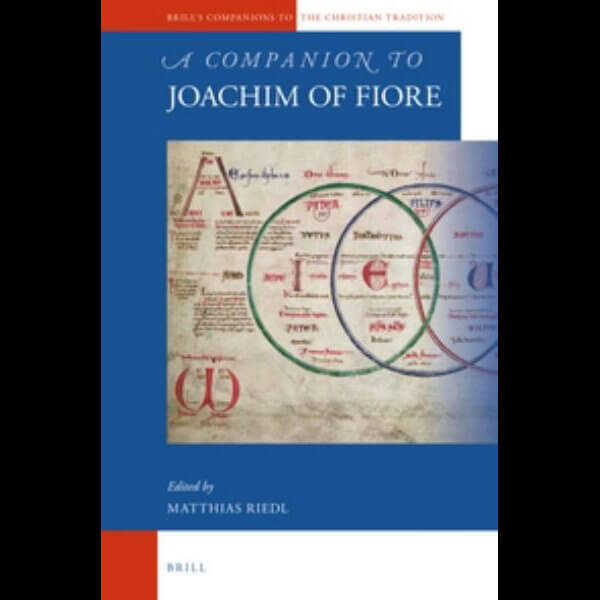 Readers of Voegelin’s The New Science of Politics will recognize Joachim of Fiore (ca.1135-1202) as representative of the tendency to re-divinize society through the invention of a Trinitarian symbolic interpretation of history. He had predicted the emergence of a Dux e Babylon to lead the world into the third realm of the Holy Spirit, and foresaw a prophet for this new age embodying the ideals Voegelin describes as gnostic. A correspondent brotherhood of the enlightened would arise to lead humanity into a new social order free of state and church machinery. Voegelin identified the rise of Nazism as dependent upon the adoption of a Joachimist history by Hegel, Fichte, and Schelling. So Joachim plays an important role for understanding the western world’s departure from the Augustinian model of stability that had defined it into the 13th century, so far as Voegelin was concerned.

Matthias Riedl has edited a volume for Brill’s well-regarded Companion series on Joachim that will certainly interest Voegelin’s readers. This is partially because non-specialists have largely only had Marjorie Reeve’s 1969 The Influence of Prophecy in the Later Middle Ages to which to turn for an objective introduction to the Calabrian Abbot. Riedl’s handbook contains the series’s hallmark summarizing chapters covering the important aspects of the scholarship on Joachim, including his biography (Alfred Gatto), a study of his Trinitarian theology (Peter Gemeinhardt), his theory of history (Brett Edward Whalen), his career as an abbot (Valeria De Fraja), two essays on Joachimism in the century after his death (Sven Grosse and Frances Andrews), and the two chapters on Joachim’s more recent role in Western thought.

Readers of this journal may be most interested in Riedl’s comprehensive chapter on the 20th-century interpretation of Joachim as the prophet of autocracy. His “Longing for the Third Age: Revolutionary Joachism, Communism, and National Socialism” introduces the reader to Voegelin’s description of the Joachimite legacy in Nazism. The value of this essay lies in its attempts to redefine Joachim’s modern legacy by demanding a serious look at later Franciscan re-interpretations of Joachim, at modern anachronisms introduced with class as the measure of Joachim’s theology, and by inviting a serious historical assessment of Joachim’s role in the development of political thought in the later medieval period. This latter topic is Riedl’s main interest, and beginning with John of Rupecissa (d.1366) and the Hussites (through 1450), he sorts through thinkers who relied on Franciscan readings of Joachim, and those who read him for themselves. These include the Wirsberger brothers, Johannes Donsten, and Thomas Müntzer, each of whom employed Joachim in their own revolutionary vision. In the 20th century, Engels identified Joachim as the theologian behind Müntzer, which legitimized the study of Joachim in communist Europe. Riedl finally weighs in on the ongoing argument about the role Joachim’s thought played in the development of Nazism. For him, Dietrich Eckhart, a poet close to Hitler, plays an important role in articulating the symbols Voegelin would describe in Nazi ideology.

Riedl’s chapter is followed by Massimo Iritano’s study of Joachim’s place in modern and postmodern theology and philosophy, particularly in the writings of Sergio Quinzio, Massimo Naro, and Ernesto Buonaiuti, as well as Ernst Bloch. Readers unfamiliar with continental theology will be interested to discover the respect with which Joachim continues to be regarded as the prophet of secularism.

My interest in Joachim lies in his importance for the development of Hussitism, and Riedl’s chapter contains references to the work of Kaminsky and Lerner, as well as Norman Cohn. Contemporary Czech scholars have recently added importantly to this literature in studies of the important role apocalypticism and the concept of a new age played in Bohemia both before and during the Hussite movement. The reader is encouraged to seek out Pavlina Cermanová’s Apokalyptické myšlení a  vize předhusitského a husitského věku, (Apocalyptic Thought and Vision in Pre-Hussite and Hussite Times, 2013, not yet translated) and Lucie Mazalová’s forthcoming study of Hus’s Eschatology (a translation of which will be published in English.)

Readers eager for their own encounter with Joachim still need to read Latin to engage with him. There is nothing available aside from a few selections Bernard McGinn provides in his Visions of the End (1998) and Apocalyptic Spirituality (1979); Riedl’s Companion provides a complete bibliography of his works, and of the secondary works on Joachim.

Stephen Lahey is a Professor Classics and Religious Studies at the University of Nebraska-Lincoln. He has published several works on Wyclif, including Philosophy and Politics in the Thought of John Wyclif (Cambridge, 2003), John Wyclif (Great Medieval Thinkers, Oxford, 2009), and a full translation of Wyclif’s Trialogus (Cambridge 2013), as well as translations of Wyclif’s commentary on the Decalogue and several of his sermons (Wycliffite Spirituality, with Fiona Somerset and Patrick Hornbeck, Classics in Western Spirituality, Paulist Press, 2013).