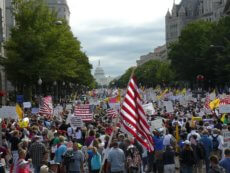 Perhaps as many as a dozen-and-a-half Republicans will line up over the next year in an effort to become President of the United States. If past experience can help us to predict the shape of this spectacle, we should expect a chorus of poll-tested and lobbyist-approved issue positions as familiar as they will be mundane. These assurances will provide Republican voters with some confidence that they will be supporting the most conservative candidate they possibly can find. But, are the calls for low taxes and restrictive policies on immigration rooted in a deep concern for civilizational order?  Or, do the defense of Second Amendment rights and skepticism about race-preferential hiring bring us closer to the Divine Ground of Being?

I can appreciate a certain incompatibility in those questions, and I recognize they may rightly be characterized as false dilemmas.  These are, for the most part, prudential questions drawn from the more mundane precincts of American political life.  Order does not hinge on a tax rate or even the Second Amendment.  Moreover, Eric Voegelin, himself, was known to be hawkish on the Vietnam War while, as a shrewd investor, he almost certainly would have appreciated a lower capital gains rate.  There are political ideas, but then there are the practical questions of living.  They are related, but principles do not always yield an unambiguous program for political life.

But those observations, in fact, illustrate my more important meaning.  This is because my questions are not about whether every issue in the whole range of American politics equally and comparably draws us into the questions found in the Voegelinian corpus.  Rather, my questions really concern whether those most ordinary sorts of American conservative opinions connect in any necessary way at all to the ideas that animate conservative political thought.  Especially for Voegelinians, where do our most essential commitments lead us in political life?

A parallel example may be helpful.  There is no straight line to be drawn from the political ideas of Leo Strauss to neoconservatism or the Bush Doctrine.  Those who have lamented the Bush foreign policy as a perversion or a misapplication of Strauss’s ideas make a good point.  But Strauss’s intellectual legacy is not unrelated to its implications we have seen in the world.  The line is not straight or even always easy to follow, but there is some relation between the Socratic philosopher and a robust policy of military pre-emption.  The Straussians who emphasize that connection can enjoy a sort of coherence unavailable to other conservatives.  Liberals have it easier, too.  Whether their inspiration is a sentimental Rousseauism, a doctrinaire Marxism, or a coolly rational Lockeanism or Kantianism, at least they can trace their political positions to roots in political ideas.  For serious conservatives, especially for Voegelinians and Burkeans, it generally is more difficult.

And, if those propositions are mildly persuasive it is worth spending some time dwelling on the difficulty.

Conservatism long has suffered from charges of incoherence.  Even its defenders can come off sounding more like John Stuart Mill (“I did not mean that Conservatives are generally stupid; I meant, that stupid persons are generally Conservative”) than not when they avoid rationalistic and systematic expositions of doctrine to explain their ideas.  Frequently preferring to speak in terms more aesthetic than systematic, a fuzzy picture can emerge when conservatives indulge their allergy to doctrinaire statements and assert their distinctiveness from the range of political doctrines begotten by modernity and Enlightenment.   However right they actually are to avoid those doctrinaire expressions, that defense risks reducing conservatism to something like a psychological state more than a serious political idea.

The rhetoric of American conservatives abounds with talk of being an “authentic” conservative, or a ‘severe’ conservative, or a “true conservative.”  In South Carolina, where I live, campaign season offers a parade of commercials making only claims like these among Republican candidates whose primary elections offer the only real contest.  The preoccupations of their voters lie somewhere other than with the issues or with a background of serious ideas, and so Republican politics (which here is conservative politics) is fixated on an identity game whose most perfect expression ever may have been found in the description, RINO (“Republican in name only”).  That term was coined at the height of the 1994 Gingrich revolt against the GOP establishment, a movement that promised to be more authentically conservative than other Republicans.  Earlier revolts against the Republican establishment followed similar patterns in 1980 and in 1964, as the Tea Party Movement has since 2009.  Conservatives grow restive and dissatisfied with the compromises that are necessary for politics, seeking out a purer, more authentic expression of their ideal almost always in outsider figures who never have borne the responsibilities that accompany politics on the national level where compromises have been necessary throughout our history, dating back to conflicts between Federalists and Antifederalists.  (The Tea Party movement’s recent inability to compromise at the national level, and the accompanying government shutdowns and near-defaults present only a more virulent development of this preoccupation with purity over prudence.)  Frustration does not lead these conservatives to a re-evaluation of strategy or tactics, but only to a more entrenched position against enemies without and within.  This is the siege mentality that, as I say, pervades American conservatism.

Perhaps we ought to give some credit to the psychological explanations of conservatism as a behavioral disposition.  There may be a certain besiegedness inevitably written into the DNA of a political idea rooted in preserving traditional institutions and ideas.  Time does not stop, new challenges ever appear over each day’s horizon, and it must be in a way natural that conservatives spend life in something like a defensive crouch.  A feeling of being besieged only can follow predictably if we are not careful, if our eye rests only on the new threat appearing over the next horizon.

I write these words as a student of Burke, Voegelin, and others—as one who identifies himself as conservative but feels himself ever to be alienated from many who also call themselves conservative.  I know I am not alone for that, or for my dismay that the flight from prudence to purity so often becomes its own variety of radicalism.  The defiant unwillingness to consider circumstances and make no recourse other than to firm and fixed principles is as ahistorical as any Jacobinism.  To expect the practical world to bend to an ideal—even a historical ideal—is as ideological as any misguided Hegelianism.  Too often, in this way, conservatism in American politics amounts to an echo, not a choice.

How can we work to cultivate a more thoughtful conservatism in the practical political world?  One that is at least connected to the ideas and principles we hold most essential?

Here, the apparent conservative weakness becomes a strength.  The same allergic relationship to ideology that puts conservatives off the abstract or doctrinaire solutions of liberalism, Marxism, and even postmodernism can help conservatives break their attachments to a party or a particular view of a specific national interest.  Being conditioned by historical experience, conservatism has within it also an ability to see past the preoccupations of any narrow historical moment.  The conservative view is a long view of history, and the identity squabbles over guns and patriotism, economic growth or immigration policy, can (and should) take a backseat to the bigger question of how we undertake political life.

So, how should we undertake political life?  The councils of Eric Voegelin are suggestive.  We should begin by recalling the youthful Voegelin’s frustrations with “The curious default of the school philosophies in the face of an overwhelming political reality,” that is with the inadequacy of “Communism, Fascism, National Socialism, and racism, of constitutionalism, liberalism, and authoritarianism” before the true questions of political reality that “a theory of consciousness” is the necessary premise for the study of politics.”[1] It is not only the neo-Kantian schoolmen of Weimar Germany who engage in “expressly prohibit[ing] anybody to ask questions concerning the sectors of reality they have excluded from their personal horizon,” after all. Such prohibitions of questions, in fact, can be found in the precincts of American conservatism today. The preoccupation with identity, authenticity, and purity is a prohibition of questioning. Shall we really take seriously the idea that Barack Obama must never be right about anything? Is it entirely necessary to believe that economic growth is the most important purpose of political life?  To recover a proper conservatism demands something better, and the Voegelinian vocabulary’s aptness to the problem suggests that readers of VoegelinView, in a particular way, bear the burden of mounting the recovery.

This recovery should stress the place of realism—especially, historical realism—in political life. When readers of VoegelinView think about our most essential commitments, surely a reasoning preoccupation with the realissimum dominates our perspective. Yet, this is not an idealized or abstract preoccupation. In fact, “always the concrete consciousness of concrete persons” is the consciousness “of the existential tension toward the ground…always concretely founded on man’s bodily existence.”[1] It seems clear that this way of looking at the problem implies a double obligation. At once, we must recognize that our existence in history toward the ground does not excuse us from addressing the concrete political problems linked to our bodily existence, while we bear a corresponding obligation to elevate even the popular discussion of those concrete political problems beyond their intramundane confinement within the limited horizon of the Enlightenment (or, for that matter, Western Christian civilization). We must cultivate, in other words, a popular way of seeing politics as more than the calculation of interest, or the winning of the next election, or the primal satisfaction of one party or social group defeating the other. We must ask in a serious and historically-grounded way, what is politics for this global, technological, post-industrial time in the light of the several histories that meet to converge where we find ourselves now. And, we must alter the perception of what that word—politics—denotes, transform it into something that is more reflective than rigid, more discursive than doctrinaire, more metalepsis than movement conservatism.

These words, then, ring as a call to action.  Perhaps, more pointedly, they raise questions.  Can Voegelin’s ideas offer something better for American politics, something more than the ordinary incoherence of conservatism or the programmatic certainty into which conservatism has drifted?  Rather than a program of issue positions, can Voegelinians construct a foundation in ideas from which we can approach American political problems in this time, and in other times?  Is there a firm source of how we should engage political issues of the present moment that can enjoy the same kind of coherence that seems readily available to liberals or to Straussians?

Over time, I would like to explore those questions here.  I invite the inevitable debate that will follow.

Steven P. Millies is an Associate Professor of Public Theology and Director of the Bernardin Center at Catholic Theological Union in Chicago. His most recent book is Good Intentions: A History of Catholic Voters’ Road from Roe to Trump (Liturgical Press, 2018).

Pizza Romana: The Mediterranean Diet and the Founding of Rome

Ex Machina: A Story of Chaste Love Murdered by the Ending

From the Multiversity Cave: Plato and Periagoge

What Is Human Dignity?