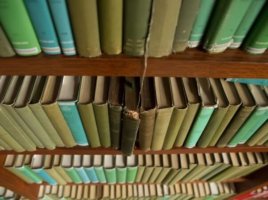 We wrote, a few months ago, about weeding the Greek and Latin collection at the Toronto Reference Library. On the same floor, 5M, of the storage area, back where only staff go, and rather few of them, further along the tan rows of sliding storage units, ponderous moveable galleries that slide apart on metal tracks when a handle is manipulated, opening a alley between each unit that resembles a sort of recollection, and a little way past Ugaritic and Welsh, are eighteen or so shelves of books that make up the reference collection of Yiddish. After the Yiddish comes Zulu, and there we are. Zuni, by the way, is over in another wing, along with the other Native American languages.

It is quiet back in 5M. If you bring a wicker chair from downstairs, and set it in a corner, it will be there the next day, and the next week. The only sound is the antiquated air-conditioning and a faint rumble from the service elevator.

The city of Toronto used to have a considerable Yiddish speaking community, as did Montreal (and still does, a little). But prosperity and time have dispersed the Spadina Avenue inhabitants, and little has been added to the collection for years. The books are dusty, and have the faintly antique flavour of books bound two or three, or five decades ago, with binding techniques now outmoded. There are books from New York, of course, but also from Vilna, Warsaw, Montreal, Buenos Aires, and even Vienna. The paper within is…not quite the paper we use now (though very close). Black and white, or sepia, photos are tipped in of the author, alone and sometimes standing with a mysterious colleague from 1937. Borges would love it. On the title page of each book someone has transcribed the Hebrew letters in Latin characters in pencil and even the pencilling is faint.

Some are mentioned on Wiki, some not. Most have passed away along with their language community.

There is nothing, certainly, unusual about languages disappearing. Ask the Sumerians. From time to time, one reads alarmist articles about the accelerated loss of lesser languages across the globe. It happens.

But there is in Yiddish, which is vanishing too and no doubt about it, a case that may be unique, and worth meditation.

Normally, what survives in documents from a discarded language is a very, very, very small subset of what was produced. Time and its catastrophes have left us about 5% of what the Ancient Greeks wrote (if that). From the river of Roman literature we have but a bucketfull. Again, ask the Sumerians. And this is from literate societies.

From non-literate societies, usually all that is preserved are selected folktales and songs, recited into the tape-recorders of anthropologists. All anthropologists want is your creation myth and enough conversation samples to do a graduate paper on the pseudo-subjunctive.

There is then in both these cases, a rigorous, ruthless, filtering. What survive are the high-points and accidents. Virgil? Climb into the helicopter. Horace? We have a seat. Others? Sorry fellas. You were expendable.

Here is the difference: at least half of the bulk of Yiddish literature seems to be still extant: we have big names, and we also have the B-team, and a lot of disposable entertainment fiction, the C-team, and whole runs of newspapers (which are disposability itself) and mountains of documents. The ship has sunk, but it has sunk more or less intact.

If there is another case, we do not know it, but would be glad to learn (let’s hear from you!).

The intervening factor of course is cheap paper & the printing press. Without it, we would have as much of Yiddish as we do of Judeo-Arabic.

Well, hear-hear and huzzah, and all that, the sympathetic reader may reply. This provides first-rate opportunity for study, by the powers!

And so it does. But that’s as far as it will go, unless we’re mistaken. Ninety-five percent of what is in the TRL Yiddish collection will never, ever, be read again. And what is read will be read under misapprehension.

First, there is the cost of reading.

When we open the New York Times or the Toronto Star, the effort we put into it (“we” are Anglophones here) is virtually nothing. Why shouldn’t it be so? We speak English and have since childhood.   The concentration we need, the effort of seeing print and hearing words in our head is negligible. We can afford to read trivialities. All we waste is a little time.

If we pick up La Figaro, our reading will be . . . a little more selective, perhaps. A column has to look as it is will pay off reviving our high-school French.

The Frankfurter Allgemeine? Only what is important. Really, really important.

Now Yiddish literature is, on the whole, in the last case. There are few people (outside Crown Heights, Brooklyn) who are fluent enough to make reading second level material economically sensible. There are, and will be, those who will read the geniuses of the field. Heaven speed their plow! But the mediocrities will never get a look-in, and, as we know from Sturgeon’s rule, that covers 90% of what is written.

And there is a second factor, which is more difficult to explain. A work of genius, a work of significant art, not only speaks to its immediate readers (as Dante wrote for his fellow Florentines) but in touching the universal, as Everest reaches the stratosphere, opens itself to the whole human race. It speaks to Man, and Man can hear it. For whom does Confucius extoll? He extolls for thee.

But the great bulk of what is written, including this column, is written only for those who share the world of the author. It depends for its success on an intense complicity between writer and reader. And this, by the way, is the great secret of Stephen King, who is virtually the embodiment of popular American culture of the last fifty years. He knows his readers. He comes close to being his readers. The same could be said for Sidney Sheldon, or Harold Robbins, or John D. MacDonald.

For Yiddish literature, those readers are gone. What is written with the we-both-know-what-we mean of those readers, now silent, in mind must be silent itself. No inquiring student searching these shelves will ever join that community for which ordinary works are meant.

This seems sad, but let it be the sadness that accompanies wisdom. What if we had the greater part of Latin literature? No one would read it. Lightening the shelves is part of creating a good library.

May we conclude with an anecdote?

We had occasion recently deal with a lot of C fiction in Gujarati, mostly paperbacks bought in the eighties of the last century. Gujarati is written in a variant of the Devanagari alphabet known to all of us.

While thumbing through the pages of one of these paperbacks, we found, printed in English in the midst of a sea of Gujarati print, the following:

The glacier knocks in the cupboard,

The desert sighs in the bed,

And a crack in the teacup opens

A lane to the land of the dead.

What this bit from the corpus of Auden was doing in this position has never been explained.

But how many English readers would be able to handle a patch of Gujarati poetry dropped into their favorite novel? Perhaps, among all the other varieties, we should recognize Anglophone privilege.

Jeremiah and the Reclamation of the West