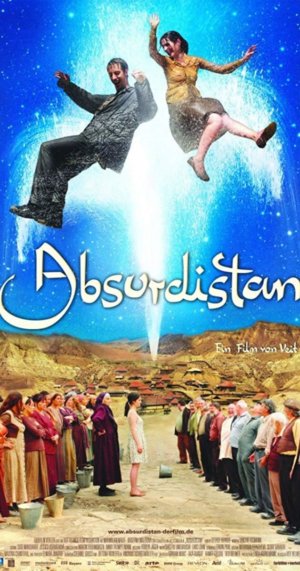 Absurdistan is a modern adaptation of a classical Greek comedy, inspired by a Turkish news story from 2001, featuring a Czech leading lady and an East German leading man, both speaking Russian in an Azeri village with Georgian supporting actors and extras. Given that the story of Absurdistan all takes place in the same small village of fourteen families in an unspecified post-Soviet Central Asian republic, this is quite the cosmopolitan undertaking. Nonetheless, it is an enjoyably-cute Veit Helmer film. Yes – this is the same man who would later write and direct the similarly-endearing Baikonur, and it shows. There is a similar fascination with the interstices between a faerie-believing traditionalist antiquity and a Soviet high-modernity that never quite realized itself, and, also as in Baikonur, there are intimations that the two of them are somehow intimately bonded.

Somewhere in Central Asia there is a Silk Road village which has been conquered consecutively by the Mongols, the Persians, the Turks, the Soviets – and which was primarily famed for the charms of its women, whom the traders and caravan guards would linger days at a time to admire. Its men, in turn, fancy themselves famed for their lusty virility – but are really marked by their extreme laziness. Indeed, much of the day-to-day business of the village, though it is owned by the men, is nonetheless vastly run by the women, who for the most part put up with their husbands, who much prefer spending their days philosophizing over vodka in the local tea house to working.

Temelko (Maximilian Mauff) and Aya (Kristyna Malérová) are both born in the village on the same day, in the same maternity ward, at the same time – and have been inseparable since, being close friends throughout their childhood and even “marrying” each other at the age of eight with the help of other village children. However, their feelings for each other change when, during one of their romps in the dusty local countryside, they happen upon another couple having a – well – romp in the dusty local countryside. Temelko starts literally chasing Aya, but Aya, who is no less desirous of Temelko, wants her first time to be perfect: she wants to feel like she’s flying. Her babushka (Nino Chkheidze) uses what seems to be a dubious mix of a Klingon blood oath and astrological mumbo-jumbo to predict that their chances of having perfect sex will happen when Sagittarius and Virgo will come into alignment four years later.

Temelko, reluctantly, agrees to keep his hands off Aya until then. But the village’s only water source – a leaking, rusty pipeline – runs dry five days before this rare alignment of the stars, and the women of the town find themselves having to do all the work of keeping the town running without water, which becomes an increasingly dirty and smelly proposition in the absence of water for laundry, dishes, bathing or drinking. After Temelko returns to the village, it’s Aya who comes up with the idea of a sex strike – as long as the town’s water main is out of action, the women are to withhold sex from the men. The result is a battle of the sexes which accelerates in comic ways – the two halves of the village become armed camps separated by barbed wire, and the two would-be lovers in the middle find themselves involved in farcical misunderstandings and embarrassments throughout, as Temelko makes efforts to prove his love to Aya by fixing the water main before the stars are out of alignment.

Again, it’s a cute film. The plot is predictable, but that doesn’t detract from its watchability. As one might expect from a romantic comedy in this genre, there are a lot of bawdy double entendres, awkward compromising situations, cross-dressing gags and slapstick. But a lot of the humor – indeed, a lot of the charm of the movie, full stop – derives from the young, awkward, disarming narration and inner monologues of the two protagonists, which drive the movie forward – dialogue being employed much more sparingly. Mauff and Malérová make a convincing young couple in love; a definite late-adolescent chemistry is present even when they’re staring each other down over the barbed-wire fence and the war of the sexes around them is escalating.

But it’s Veit Helmer’s magic-realist eye which really makes the film sparkle. Just as in Baikonur in which the comatose cosmonaut provides us with a convincingly-ethereal Sleeping Beauty, here as well the stars, fate and thwarted love combine to produce a heroic quest for Temelko. Aya’s father had once gone down to fix the pipe along with four other villagers, and all of them drowned. Temelko must similarly journey to the subterranean land of the dead to provide the dying village with water – with life. But this is all handled on-screen with an eye on the prosaic detail (often with a sepia-toned grainy-and-scratched filter applied in post-production), on a post-Soviet village’s struggles to satisfice with rusting and failing technology, which here as well operates by a kind of faerie logic. Temelko’s romantic efforts to help Aya realize her dream of flying – including a jury-rigged rowboat hooked to a pulley between their two houses, and a much more precarious-looking makeshift rocket built from an old tractor seat and what look like a fire extinguisher and an old propane tank – add to the sense of post-Soviet whimsy.

Absurdistan is certainly a light film that’s easy on the eyes and doesn’t require a great deal of deep thought. The local touches, the post-production grit and the dry, hilly Azerbaijani scenery do add to the movie’s flavour. But the story is one which appeals to a primal, universal mythos that relies on the tension between the sexes for its narrative power.

The Wisdom of Lyric: Deryn Rees-Jones