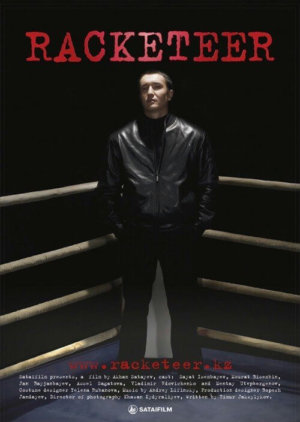 Last month before leaving for Tulsa, I watched the Aqan Sataev film Jaýjúrek myń bala, the dastanic national epic written for the twentieth anniversary of Kazakhstan’s independence, centered on the life and exploits of the orphaned Sartaı. Sataev’s later piece is a tribute to Kazakhstan’s now ex-President Nursultan Nazarbaev, who – the end of the movie states explicitly – finished the grand historical task for which Abylaı Khan and Sartaı and other Kazakh heroes had fought for centuries. This was not, however, the film that made Sataev (and his studio, SataiFilm) famous. One of Sataev’s first movies was a neo-noir crime film: Réketır (that is, Racketeer), which was far less laudatory and far less heroic – but which was hailed on its release as a true reflection of a certain era in post-Soviet history.

I do have to wonder a bit if Aqan Sataev and Sergei Bodrov don’t have something of a friendly rivalry going on: the films they produce and direct are often very similar to each other. This film, for example, bears a number of surface-level resemblances to Guka Omarova’s Shıza (Schizo): both movies are about a youngster’s “descent” into, and possible redemption from, a violent life of organised crime. Both movies were produced on a shoestring budget with drama-school casting. They share a number of thematic elements as well. Both Shıza and Réketır are, at bottom, commentaries not only on organized crime but on the entire capitalist ethos of the post-Soviet 1990s – with its shock therapy, individualism, materialism, alcoholism, violence, naked greed and (often literal) backstabbing.

But Mustafa’s understated revolt in Shıza against the norms of his time – his selflessness; his sense of fair play; his familial loyalty and particularly his love for Zinaida and Sanjik – keeps him somewhat aloof and preserved from the base grasping and thievery going on all around him in a greedy and materialistic society which inevitably sees him as stupid or crazy. By contrast, Sataev wants us to inhabit and sympathize with the mentality of a “normal” person in this society. Saıan (Saıat Isembaev) is the main character as well as the narrator – his Mike Hammer voice-over often providing us with interior monologue and other context. A below-average student in school – much to the disappointment of his mother in particular – he enlists in the Soviet Army and comes out with a scholarship and a job as a courier. The one thing Saıan is good at – even though in his youth he didn’t enjoy it – is boxing. However, we see from flat shots of his parents watching Gorbachev on an old black-and-white TV that the times are changing.

Saıan’s father is fired from his state-provided job, and falls into depression and drink. His mother takes to selling things on the street. Saıan’s high school girlfriend Asel (Asel Sagatova) leaves him for a richer man. One day in 1993 after a boxing match, a man named Ruslan (Murat Bisembin) approaches Saıan with an offer of a steady job – which, unsurprisingly, Saıan doesn’t turn down. Ruslan, it turns out, runs his own local extortion ring, and is hiring Saıan to be one of his “boys,” that he sends to shake down (and “protect,” if they’re compliant) local businessmen like the bartender Abu (Bolat Qalymbetov): breaking a nose or a leg or an arm if need be. Saıan then introduces us to his partners in the business – most notably Aman, who murders one of Ruslan’s rivals and does ten years in prison as a result, only to seek solace in the Qur’an while in prison. One of Saıan’s “brothers,” a petty crook who cheats passersby with a shell game (played by Tolepbergen Baısakalov, who landed a supporting rôle in Tulpan about the same time), boasts that he just got back from America on his bike just before a couple of Russians, whom he presumably conned earlier, demand their money back from him. They get into a fight with Saıan and Ruslan’s other “boys,” who leave them all out cold and bloodied. However, these Russians are connected to the police, who arrest them all.

Ruslan’s gang doesn’t just dabble in such petty crimes, though – they also muscle their way in on bigger business. They manage to earn their keep “protecting” an up-and-coming businessman, with Western fashion sense in the new nineties mould, named Jan (Janat Baıjanbaev), who is currently aiming to start in on a big industrial venture with the help of partners from Moscow. Ruslan is promised a cut of all his future business. For a while, things start looking up for Saıan – his parents are no longer in as desperate a situation, though neither of them are happy with the shady business he’s gotten into. He also runs into Asel again, who is divorced. Now that Saıan is doing better for himself, she wants to rekindle their relationship, and invites him over to her house for “a cup of tea.” Things start to go south, however, when Jan runs into financial problems – and brings in another ‘business partner’ with more money and more muscle than Ruslan & Company have.

The film alternates, sometimes startlingly, between treating its story with scowling seriousness and with a certain satirical, comedic eye. Sataev seems to have a preference for these flat shots of the businessmen Ruslan and his crew shake down, as they make obsequious gestures to the “boys,” that are clearly meant to draw laughs. The relationship between Saıan and Asel has none of the same charm as the parallel relationship between Mustafa and Zinka in Shıza; Zinka clearly cares about the money Mustafa brings her, but only insofar as she’s a foster mother who has to make rent somehow – Asel just comes across as mercenary. This unfortunately causes the one scene in which Saıan shows true, unguarded grief – when Asel miscarries in the maternity ward – to fall slightly flat. For the most part, however, we come to sympathize with Saıan, whose normalcy, despite his indisputable criminality, can sometimes disarm us. When he is suddenly and unexpectedly thrust into the position of gang leader for the first time, we can sense his indecision, and we know that despite his willingness to use his fists, he simply doesn’t have that streak of sadism and ruthless vindictiveness he needs to be “successful” from the perspective of his own enterprise. Despite being somewhat alienated from his old friends in the army and from college, really he’s still just that college kid who got in way over his head.

It was clear to me from Sataev’s Jaýjúrek myń bala that he has some deeply-held Islamic convictions, and they do show up quite strongly in this movie also. But here the Islamic voice does not serve any nationalistic or triumphalist purpose. Sataev’s Islam is much more that of the Sufi poets: he is looking for a specific kind of repentance. The voice of conscience in the film is Aman, the hit-man from the first act who went to prison for putting one of Ruslan’s rivals out of action. As Aman drives Saıan to a mosque to pray, he begins talking about what he learned in his time in prison, how he learned to put away old grudges and live his life with a sense of contentment rather than greed. For Aman, if God judges everybody at the end, and if His judgements are not our judgements, then we have only our own acts and our own injustices to be responsible for, and have no need to seek revenge. Aman says that there is a bowl hanging over every man’s head containing all the injustices he does, and if it overflows, the evil will pour out upon him. It seems that for Sataev, as well as for the Russians who struggled with these issues at the same time, the “way out” from the cruel, cutthroat materialism of the 1990s lay in a return to God – the “long walk to mosque,” if I may appropriate and slightly abuse the Orthodox phrase. Saıan never quite finishes that walk, though, despite Aman driving him right up to the door – and he is left with that bowl of his own evil poured out upon him.

As crime movies go, Réketır, despite its few dabbles into possibly comedic or satirical territory with regard to its subject matter, still comes across as effective. It moves at a quick clip. It strikes just the right note of gangster bravado: letting us see the big Western luxury cars, the Rémy Martin cognac, the discos and the dinner parties that were the putative earthly reward for the spent casings and bloody knuckles, without rubbing them in our faces, romanticizing or glorifying them. The violence itself is likewise gritty and understated, not cartoonish. And the religious themes – particularly as they relate to the gangster code of retribution – here seem to mirror those in, for example, a Martin Scorsese movie a bit more so than the Russian crime films from the same period.

Ascending the Mountain of Love

The Poland of Asia: Korea and the March 1st Movement

Czeslaw Milosz and the Metaxy