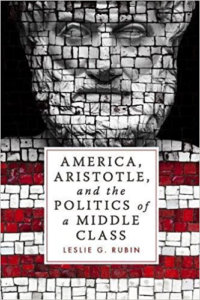 Today the middle class in the United States is threatened, with its decline and diminishment exacerbating political conflict at home and schizophrenic policies abroad. The result is that America appears to be in trouble with political polarization, economic stagnation, and government dysfunction. For Rubin, the underlying cause of these symptoms is the collapse of the middle class as an economic, social, and political element in American politics, a diagnosis that Aristotle outlined in his Politics. America, Aristotle, and the Politics of the Middle Class therefore seeks to recover the Aristotelian insight of the importance of the middle class for American democracy: how the American founders understood it from Aristotle and what we can learn from both for today.

According to Rubin, Publius’ new science of politics – separation of power, a republic over a large territory, resistance to factional conflict – have their origins in Aristotle’s political science where he advocated a large middle class or middling republic where citizens could rule and in turn be ruled. The insights of Publius and other modern political thinkers like Hobbes and Locke were anticipated by Aristotle but only became first actualized in the founding of the American regime. The founders rediscovered these Aristotelian truths about human nature and had the political will and culture to put them into practice.

These Aristotelian truths include that human beings are by nature political animals, the city is a natural political association, and the best political association will support the flourishing of human life. The best politics requires a large middle class where its citizens rule and in turn being ruled. The middle class favors neither the rich nor the poor but those in the middle who seek to balance the interests of the other classes. No one office holds too much power, everyone has a chance to participate in politics, and citizens are allowed ample time to for their private pursuits of self-reliance. The American founders drew from these Aristotelian insights at the Constitution Convention to form a new republic.

In the first part of the book, Rubin concentrates on Aristotle’s conception of republican politics in three chapters. In the first chapter, “A Practical Republic,” Rubin reviews Aristotle’s evaluation of the existing poleis of his time – Athens, Sparta, Crete, Carthage, Plato’s Republic and Laws – to see what features he admired for republic. Some of the lessons he learned are that politics requires a dominant class that reveres military virtue, education in both war and peace, the rule of law, and the participation of the demos into political decisions. Although Aristotle criticized these regimes, he did so because they contribute to our understanding that the best political regime is not an imaginary one but one that can be realized as much as possible among free and equal people practicing politics.

Chapter two, “Citizens, Rulers, and the Law,” examines the question of political authority. Since authority is an honor, it should be given to those citizens with merit (i.e., those who look out for the common good of the polis) and political prudence. To accomplish this, the legislator or founder must first determine what type of person he or she wants to rule and what types of offices should exist. The legislator also must take into account the inhabitants’ character to maintain the regime’s stability and whether this can be best accomplished by the rule of law or kingly rule. Depending upon the circumstances, the legislator may choose to honor one person, a small group of people, or a “certain multitude.” Although Aristotle favored the middling element as the most trustworthy class to produce citizens to serve in political office, he may not always select them to rule if circumstances do not permit it.

Aristotle’s best regime, the middle-class republic, is the focus of chapter three. The republic is a good regime for those of some wealth and freedom and not extraordinary in virtue, unlike aristocracy which is good relative to the body of citizens who are virtuous, free, and wealth. Thus, the republic is for the general welfare for citizens whereas aristocracy is only for the aristocratic class. The excellence of the republic lies not in the virtues of its individual citizens but in their collective virtue that supplement the ordinary virtues of individuals.

The republic itself should be a mixture of democracy and oligarchy (e.g., paying the poor to serve on juries, use a mixture of election and lot to choose officials) with the goal of promoting stability. Middling property holders are critical for the republic’s stability because they are ruled more by reason than by the arrogance of the rich or the malice of the poor. The middling also neither want political office too much nor shun it, and more likely to be friends among themselves. Finally, the middling will exact justice among members of its own class because of its natural temperance and among the rich and poor because of its natural position as arbitrator. Compared to the rich or the poor, the middling is favored by Aristotle for the best type of regime because it promotes stability.

The threat that instability poses to any regimes, particularly to a democratic one, was a concern of the American founders. This is the theme of the second part of the book, which also has three chapters. Chapter four, “Happy Mediocrity,” examines how the founders applied Aristotle’s concern for political stability and justice as fairness to all parts of society in their thinking. Rubin shows how John Adams, Benjamin Franklin, Melancton Smith, “The Federal Farmer,” and “The Citizen of New Jersey” saw Aristotle’s point about the virtues of the middling class as well as how Thomas Jefferson, James Madison, and Charles Pinckney believed in the virtue of widespread but not large landholding for citizens. These founders made proposals to bring property requirements for voting and officeholding, encouraged moderate property holding rather than a few to accumulate vast estates, and promoted moderately wealthy professional, commercial, and agricultural classes to be self-reliance and appreciate their independence rather than be class envious.

The virtues the founders hoped would emerge in the new republic is the subject of chapter five. What we find is that they are similar to the ones Aristotle encouraged: reasonableness, temperance, moderate ambition, friendliness, self-reliance, political stability, and fairness to all. This industrious, moderate, and frugal citizen was drawn out in the writings of Oliver Ellsworth, John Dickinson, and Noah Webster. These social and economic virtues in turn supported political ones, such as selecting and monitoring elected officials. James Madison and James Wilson wrote about how ordinary Americans would be able to recognize the most virtuous candidate in a campaign for office and would remain vigilant over elected official so they would act with good behavior.

Chapter six, “Securing America’s Future,” looks at education as critical to preserving the republic’s stability. Unlike the other chapters, this chapter shows how the founders disagree with one another about type of education best suited for the American republic. The Anti-Federalists wanted education to be taken care at the state level, thereby making the national union no longer a republic of similarly-educated citizens. Noah Webster, Benjamin Rush, and Nicholas Collin showed that the new constitution presupposes an extensive moral citizen education. And Thomas Jefferson’s “natural aristocracy” only favored the capable few, contrary to Webster’s, Rush’s, and Collin’s desire to educate every citizen.

America, Aristotle, and the Politics of a Middle Class perfectly blends classical and modern political theory in illuminating the importance of the middle class in both antiquity and modernity. The book is especially relevant now with our eroding middle class and the resultant political polarization and dysfunction that plagues our government. By returning both to the American founders and Aristotle, Rubin provides us a path to see where we, as a country, have been and how far we have strayed. If we want to understand the underlying causes for our current political predicament and how we may be able to emerge out of it, America, Aristotle, and the Politics of a Middle Class is the antidote that we are seeking.