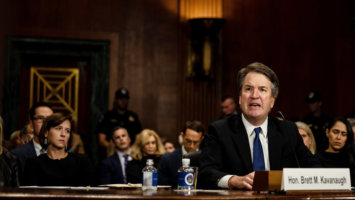 After Christine Blasey Ford testified before the Senate Judiciary Committee on September 27 of last year, the editors of Commonweal singled out one moment as the sharpest “heartbreaking detail” in her entire remembrance. It was the laughter, they noted, in her words “the uproarious laughter of the two, and their having fun at my expense.” They judged it “forthright testimony” and cited “a number of observers” who judged her “incredibly credible.” She has “inspired other survivors to come forward,” the editors continued, people who have found the courage to break “years or decades of silence.”

Judge Kavanaugh, on the other hand, “displayed no such poise or sense of the world beyond himself.”  He spewed “partisan fury, sniveling self-pity, and distortion of the truth.”  He showed “petulant disdain,” he “raged,” he came off as an “entitled adolescent,” and sometimes “seemed barely in control of his anger.”

Nowhere did the editors realize the irony of their contrast between the sober, reflective Ford and the reckless, haughty Kavanaugh. To begin with, many people found Ford quite unconvincing, and not just the four alleged witnesses who denied her allegation under oath. Janice Fiamengo reflected the views of many in her suspicion of Blasey Ford’s “little girl croaky voice…poor me face, and . . . trembling I’m gonna cry at any moment narration.” Blasey Ford’s demeanor, said Fiamengo, was “supposedly because of the trauma of reading out a prepared script about something discussed in therapy and rehearsed dozens if not hundreds of times with a legal team and other advisors; a trauma that required putting two doors on a big costly house.” All this, for many of us, was no more plausible than Ford’s fear of flying, which was an obvious lie, the woman having a documented record of frequent international travel by plane.

What is more, as most people recognized from the start, the allegation Ford made—aggressive groping by a drunk 17-year-old 36 years before, dimly remembered and uncorroborated by anyone else—was itself dangerous and disturbing.  How many individuals remember doing things as an adolescent that make them wince? A properly humbling question that is, though we would not know it from Kavanaugh’s zealous critics.

Then there was the assumption, likewise troubling for many Americans, that a middle-aged man’s character and competence may be defined by a single act committed at the age of seventeen. The necessary objection here, justified by our common experience, is that nobody lives as though, more than three decades later, he is defined by a single act, least of all by one from his teens. If we did live like that, life would be unbearable. Human nature is so frail, and life itself so difficult, with people sometimes being unknowingly conditioned to do evil by their very circumstances, that we must not allow ourselves to be forever beset by guilt concerning past deeds. To do otherwise would be to expect men and women to live as saints from beginning to end. For if a moral failing is such that we can never move past it, the only solution is moral perfection. Not only is that unrealistic; it’s perverse.

Everyone looks back on his youth and thinks: “I was a dumb kid—I didn’t know what I was doing then.” We tend to do this throughout life, in fact. I myself, for example, being in my thirties, look back on my twenties and only now see how clueless I was about certain things. So I am fairly generous in my self-assessments in some respects, even as I know well that when it came to certain things, I did know better but erred anyway. This is not to say to that we all deserve a pardon for whatever ignorant or dumb things we do when we are young or at any other time; the point, rather, is that human character is not nearly as simple as Kavanaugh’s critics imply.

What makes this subject so difficult, however, is that there is a certain paradox between the need for social order and our awareness of the overwhelming complexity of human experience. People must be accountable for their bad conduct; otherwise there could be no law and order at all. So it happens that, in a practical-moral sense, we somewhat reduce the moral agent himself to his bad deed, as if there were nothing else that went into constituting his character. Nevertheless, to any reflective mind, it is surely evident that character is far more complicated than that.

And yet, such is the self-interested nature of human judgment that we tend to pardon ourselves where we are harsh on others. We are given to the same inconsistency and bias in favor of our intimates. As a general rule, it may be said that insofar as we ourselves and those who matter to us are involved, our judgments will probably be not objective but profoundly biased and hypocritical, even though, with our usual selfishness and motivated reasoning, we take care to overlook that bias and hypocrisy.

After all, moral judgments are essentially unavowed vehicles for people’s own values and interests. Said F.H. Bradley: “We see what we perceive; and the object of our perceptions is qualified by the premises of our knowledge, by our previous experiences.” In other words, before the event there is epistemic perspective and personal value. Thus, the event naturally becomes an occasion for expressing what people already value and believe. Our values and interests may or may not be right, good, or wise. In any case, they are the primary, fundamental thing.

Consider the editors of Commonweal, for example. When it comes to sexual assault allegations, people are overwhelmingly biased in favor of women, the weaker and biologically more valuable sex, as it were. It’s quite telling that while the editors found Blasey Ford’s testimony about the laughter “heartbreaking,” it never occurred to them that Kavanaugh might have had a good reason to react with “partisan fury” to a manifestly partisan hearing. In the words of prosecutor Rachel Mitchell herself, “the activities of congressional Democrats and Dr. Ford’s attorneys likely affected Dr. Ford’s account.” Faced with an unsubstantiated accusation that might well ruin his and his family’s lives, a man may fairly be expected to react with a good deal of negative passion. There is a such thing as righteous anger, to be sure. The editors never considered this in Kavanaugh’s case, probably because they were unwilling to consider that he might be innocent. They speak of his “distortion of the truth,” as if they actually knew the truth themselves. Their lack of empathy and sheer contempt for the man is conspicuous in what they call his “sniveling self-pity;” their deep bias in their description of his testimony as “a diatribe filled with Fox News talking points.” These words are pretty rich coming from people who use such trite, sentimental cant as “she…inspired other survivors to come forward on social media and the airwaves to share similar experiences, many breaking years or decades of silence.” Egregious and ungenerous, “What Brett Kavanaugh Revealed about Himself” reveals that it is not Kavanaugh who lacks “humility” and “self-awareness,” but the editors themselves.

Montaigne, in his immense honesty, told us that human actions “commonly so strangely contradict one another that it seems impossible they should proceed from one and the same person.” At our best—in our unflinching self-examination—we know this is true; we know we are good one moment and evil the next: the whole of our conduct ever-changing, save for its frailty. Our complexity and frailty alike require a firm public-private distinction, a value that is now threatened. Consider, for example, the letter signed last year by over 2,400 law professors opposing Kavanaugh’s confirmation to the Supreme Court. Kavanaugh, according to the professors, “displayed a lack of judicial temperament” at the September 27 hearing. The letter was emailed to the offices of Senate Majority Leader Mitch McConnell and Senate Minority Leader Chuck Schumer on October 4, 2017. In an article for The American Spectator, “Moral Smugness Towards Brett Kavanaugh,” I wrote:

The general, unspoken premise of Kavanaugh’s self-righteous critics is that judiciary reasoning is determined by temperament in some precise, straightforward sense that everybody understands. This is sheer nonsense. People are simply assuming a certain relationship because doing so allows them to assert their prejudices and interests…Temperament and reasoning, though related in many instances, are quite different things. Although we have the rightful intuition that a moral monster should not occupy any position of importance, temperament does not explain reasoning, nor does the latter reduce to it…It is the same with character. Your neurosurgeon may be a jerk, but that in itself entails nothing about his ability qua neurosurgeon. Likewise with Brett Kavanaugh and his jurisprudence.

As many people have noted, Blasey Ford’s allegation against Kavanaugh seemed like a return to the Clarence Thomas-Anita Hill controversy. Regarding that thorny subject liberal philosopher Thomas Nagel wrote some wise words:

“[There is] no excuse for abandoning the private-public distinction: This sort of bad personal conduct is completely irrelevant to the occupation of a position of public trust, and if the press hadn’t made an issue of it, the Senate Judiciary Committee might have been able to ignore the rumors. There was no evidence that Thomas didn’t believe in the equal rights of women. It is true that Hill was his professional subordinate, but his essential fault was being personally crude and offensive: It was no more relevant than would have been a true charge of serious maltreatment from his ex-wife.”

Although he credits Hill’s allegation, Nagel nonetheless understands that, again, moral character does not determine judiciary competence, which is an intellectual thing. For Nagel, there is no relationship between Thomas’ “bad personal conduct” and his fitness to be a Supreme Court justice. That conduct is a private matter, so the public should stay out of it. When we make it public, we put everyone, potentially, into the status of “the accused.” Nobody is innocent. All we can do is hope that the spotlight doesn’t shine on our own past. But some will be unjustly scrutinized, and the Commonweal editors’ take on Brett Kavanaugh, and the 2,400 law professors who signed the letter condemning him, each exemplify the sort of dangerous imputation and blind sentimentality that inevitably result when we lose the public-private distinction.

This doesn’t mean character in general (or all personal conduct) has no bearing on a person’s fitness for a position of public trust. Yet unless we want public life to be endlessly miserable and treacherous, a lot of private behavior—and yes, vice—should remain unacceptable for public scrutiny. The personal is not always political. When a law has been broken, it is to be dealt with by the criminal justice system. Moral failings which do not violate the law may merit the reproaches of one’s intimates, but not of people in general. The public-private distinction is indispensable to democracy and to any life worth living. So we need to mind our own business, like adults.

Christopher DeGroot is a columnist at Taki's Magazine. His writing has appeared in The American Spectator, The Daily Caller, American Thinker, Frontpage Magazine, New English Review, Jacobite Magazine, The Unz Review, and Ygdrasil, A Journal of the Poetic Arts. Follow him at @CEGrotius.

From the Multiversity Cave: The Universal Sciences

In Praise of the “Divine Madness”