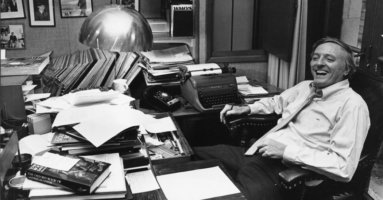 So everyone’s talking about the article by the intellectual Russell Jacoby on the alleged fact that there are no conservative intellectuals anymore.

The article isn’t much good, in fact. One problem is that it doesn’t really explain what an intellectual is.

The first outstanding criticism of modern intellectuals came from the lefty philosopher Jean-Jacques Rousseau. He explained that in a modern, sophisticated society they’ll be a “new class” of people attempting to distinguish themselves by their devotion to ideas. They would be driven much more by vanity than love of truth or concern for others, and their main impulse would be displaying their superiority in the public square. They would be the source of the fashionable dogmas—kinds of popularized science and other forms of self-helpy expertise—that would tend to displace religion and patriotism. The new dogmas wouldn’t really be more true than the older ones, and they would have the huge practical disadvantage of “deconstructing” moral virtue as most people experience it.

So against the witty and fashionable intellectuals Rousseau praised ignorance. His authority in that respect was Socrates—the philosopher who said time and again that all I know for certain is that I know nothing. Socrates didn’t know enough to be an atheist, just as he didn’t know enough to affirm the gods of Athens. Socrates distinguished his endless quest for what he didn’t yet know with the activity of the sophists—the experts who thought they possessed the true and scientific theory of education and should be paid the big bucks for sharing those most useful and enlightened techniques with others.

Socrates differed with the sophists by not thinking that the education of the whole human being could be reduced to some technique, just as he differed from excessively patriotic and pious—and so sometimes excessively angry—good citizens who thought that education is only adhering to traditional moral principles or obedience to the gods.

Education has a lot to do with technical knowledge, but it also has to do with morality, with knowing who you are and what you’re supposed to do as a being with a soul (or a self-conscious mortal animated by more than merely materialistic impulses). Socrates claimed to be ignorant because he knew he didn’t have a comprehensive theory of education that brought together and did justice to both our technical and moral dimensions. So he thought that those—including both fundamentalists and sophists or intellectuals—who thought  they had such a comprehensive knowledge of the human good assumed they knew much more than they really did.

Our fundamentalists these days know a lot less than they think they do. But so do our “new atheists,” evolutionary psychologists, neuroscientists, and so forth. The latter—when they become public intellectuals—typically fall victim to scientism, to highly speculative and ideological systems of explanation that go way beyond what they really know through science. Arguably the truth is that the arguments for and against atheism—and universal determinism—are pretty much the same as they were in Socrates’ time.

Arguably, the biggest change since the time of Socrates is the idea of the free person—one introduced into the world by Biblical and Christian thought. When our deterministic scientists deny the real existence of the free person, they, today’s conservatives often object, are asserting more they really know. That denial, of course, includes the denial of the real existence of the virtues, beginning with courage. It makes nonsense out of the indispensable moral categories of praise and blame and good and evil.

Today’s best conservatives don’t object to elites as such, but to elitists vainly or unreasonably contemptuous of the longings and beliefs of ordinary people.

Let me add that it’s not been my experience at all that conservatives are either contemptuous of or lacking in true erudition. I recently returned from the week-long honors program of the conservative foundation, the Intercollegiate Studies Institute.

Both the students and professors in the program are so serious about the wisdom to be fund in our great intellectual tradition that they actually have devoted themselves to all sorts of highly disciplined intellectual pursuits quite uncharacteristic of our liberal public intellectuals. Several of the students are majoring in classics and many others are studying Greek or Latin as part of majoring in theology and philosophy. The most charming and accessible of the young professors is a Harvard specialist in medieval Latin.

They all agreed that to be civilized and genuinely educated depends upon overcoming the dogmas of our time—both fundamentalist and scientistic. And so they’re all about reading the Greek and Roman authors in their original texts—including, of course, the brilliant theologians St. Augustine and St. Thomas Aquinas. They know all about Maimonides and Buddha too.

There were also lots of deep lectures than ranged across all sorts of great books and millennia of history. But there was no PowerPoint. And there was, to say the least, no shortage of good questions.

Alexis de Tocqueville, as I’ve said before, contended that public intellectuals in democratic times should focus attentively on the Greek and Roman authors as indispensable antidotes to the prejudices of our time, beginning with techno-atheistic prejudices against metaphysics, theology, and the human soul and its distinctive needs. I don’t see our liberal intellectuals, for the most part, having what it takes to free themselves from our sophisticated prejudices.

This was originally published with the same title in The Imaginative Conservative on February 11, 2013.

The Alcibiades of Our Time