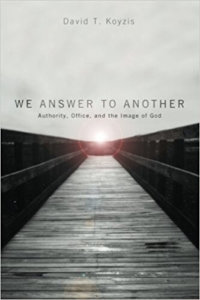 We Answer to Another: Authority, Office, and the Image of God. David T. Koyzis. Eugene, OR: Wipf and Stock, 2014.

It seems almost a truism that monotheism favors monarchic and hierarchical forms of political legitimacy. All authority arrives by appointment from on high. It flows down from God, who is the source of all legitimating authority, upon whomever God deigns to confer it among humans. It stands to reason that these humans would then become sources of authority in their own right, bestowing subordinate authority upon those whom they choose. Add to this a healthy dose of omnipotence and omniscience, and we may echo with full logical consistency the avowal of St. Paul: “There is no authority except that which God has established” (Romans 13:1).  On the face of it, this does not comport well with the egalitarian and democratic principles that form the basis for the modern liberal democracy.  Here authority is a grassroots movement, sprouting up from the soil of popular sentiment below.

In his groundbreaking book, We Answer to Another: Authority, Office, and the Image of God, David Koyzis attempts to give the lie to this antithesis between divine autocracy and human autonomy. He proposes an alternative model that grounds all political authority in our status as bearers of the image of God. If political authority does derive solely from something of which we all have an equal share, qua our status as humans, it follows that no human has an inherent right to rule of any other human, and yet every human answers to the higher authority of God, who is the ultimate source of this status from whence we derive our authority. And hence, the putative conflict between individual autonomy and divine authority dissolves; for all authority does indeed arrive from above, but, owing to its equal and universal distribution among us, every actual political entity immediately derives its legitimacy from below.

Koyzis structures his overall argument as an inference to the best explanation. That is to say, he juxtaposes the image account with its modernist rivals. He then argues that only the image account can explain and preserve several material adequacy conditions for a viable account of political authority, thereby making it the best explanation of the actual phenomenon of legitimate authority.

The first material adequacy condition that any viable account of authority must meet is: It must be able to distinguish authority from power, where power is defined as the ability to do something. Koyzis argues that all modernist theories inevitably conflate power with authority. For example, suppose we, like Weber, assimilate authority to charisma, the ability to persuade people to a certain course of action. Then we would have to license the validity of the inference from

x can persuade people to do A

x has the authority to direct people to do A.

But surely such an inference does not hold. I might be able to persuade everyone in my town to drive below 55mph on a certain road. Yet this does not imply that I have the authority thereby to set the speed limit at 55mph on that very road.

Not only must adequate accounts of authority distinguish between power and authority, they must differentiate various forms of authority. This is what Koyzis calls the inherent pluriformity of authority. He argues that modern secular accounts tend to reduce it to a single form. Take, for example, Rousseau and Kant’s theories, which attempt to ground all authority in the autonomy of the individual human will. They, thus, transform the complex and interlocking network of social institutions into a series of voluntary or contractual associations. But this fails to account for parental authority, which permits, and even encourages, an authority over children without their consent.

Moreover, modernist theories of legitimacy create an artificial tension between political authority and individual autonomy.  Koyzis argues that the image account eliminates this conflict by recognizing individual autonomy as one form of authority among a plurality of others. Since our status as bearers of the image of God paints a picture of human existence that is inherently multifarious, each of these particular modes govern a distinct aspect or domain of human existence and hence compliment rather than contradict one another.

Koyzis’ book formulates a vision of authority that is extremely suggestive. But I felt like I was merely catching glimpses of the image of a substantive alternative account and not its reality. I found two major lacunas in his account: First, Koyzis has not really provided us with an account of the nature of authority. Consider his definition of it: “To have authority is to exercise an office” (138). He is entirely correct that the connection between authority and office is so intimate that this statement cannot help but be true. But it is an intimacy that borders on incest, hiding a vicious circularity. This is seen in his definition of office. An office “. . . is a commission, an assignment, or calling given by God to specific persons for the fulfillment of certain tasks” (137). Obviously the word that bears the explanatory load in this definition is “commission” and its conceptual cousins. And yet a commission in the relevant sense is nothing more nor less than the authority to act on behalf of another. Hence, his definition amounts to defining authority as a charge granting authority. This is analogous to defining being human as one who is born of human parents. Such a statement purchases truth at the price coherence.

Koyzis might respond that I have ignored the commissioner in my assessment. God is the granter of authority. Koyzis is not trying to define authority in general but rather human authority. Fine, but surely we then need an account of God’s authority. What gives God the authority to bestow authority? Obviously it can’t be by virtue of an office God holds; for then God’s authority would be derivative, and we would merely be pushing the question of the grounding of authority back ad infinitum. Nor can God possess authority by virtue of his infinite power or knowledge.[1] If neither power nor knowledge in their finite forms can grant authority to the possessor of these attributes, why would infinitely expanding them do so? In other words, Koyzis reduces authority to office in order to ground authority. But, by his own definition of office, this concept is manifestly ill-equipped to play the founding role he assigns it, as an office is a dependent kind of authority that itself needs grounding. This is even more clearly discerned in the notion of an image. If I state that all human authority arises out of our status as images of God, then I am asking my interlocutor to look beyond this status to that which the image is the image of. I am stating that our authority derives from a certain kind of similarity or isomorphic relationship that we share with God. So this account in its present form is nothing but a promissory note for an explanation rather than an explanation of the actual nature of authority and its grounding.

Suppose, for the sake of argument, that Koyzis is able to fill in this explanatory gap. Even then our status as images of God cannot explain why individual humans legitimately hold power over other humans, especially in political contexts. For the commission is a charge to rule over Nature, not other humans. This is why Augustine states that God “…did not wish the rational being, made in his own image, to have dominion over any but irrational creatures, not man over man, but man over the beasts” (Augustine 2003, 874). This makes sense, because the Imago Dei is not a property of degree. Every human, by virtue of being human, equally shares in the image. As a consequence, our status as image bearers can only grant us an equal amount of authority and hence cannot explain why some humans legitimately hold authority over others.

Koyzis will rightly respond that the commission to rule over Nature is so complex that it requires a coordination of talent and resources entailing specialization. Such specialization necessarily involves “. . . a differentiation of authoritative offices branching out…from this central office of divine image-bearer” (163). This answers the general question of why humans must hold authority over other humans, but not the specific question of why David holds legitimate authority over Ish-bosheth. In other words, it will not do to argue: David is an image-bearer in context C. Context C demands that someone holds the office of king of Israel. Therefore, David ought to be king. For an argument of the same form would equally justify Ish-bosheth’s claim to legitimacy. Koyzis might be tempted to take my example too seriously and contend that in this particular case David was God’s anointed. He, therefore, is entitled to the office by divine mandate. But this would only acquiesce to the insufficiency of the Imago-Dei in itself to ground the possession of political authority, for some additional condition was required in order to ground David’s authority.  In other words, since the image is shared by all humans, it becomes explanatorily irrelevant in any justification of any particular human’s authority over any other human.

So Koyzis has provided the Judeo-Christian theist with a programmatic challenge, not a first effort in meeting that challenge. I myself would like to return the favor:  I challenge Koyzis to replace the image of an explanation of authority with an actual explanation.

Koyzis, David. We Answer to Another: Authority, Office, and the Image of God. Eugene, OR: Pickwick Publications, 2014.

[1] Koyzis himself admits this when he states: “All human authority derives from God’s sovereignty . . . This authority is not to be confused with ability –with the mere power to do something” (226).

Troy Catterson is an Assistant Professor of Philosophy at Salve Regina University in Rhode Island. Troy's current interests center on the interplay between metaphysics, logic, meta-ethics and philosophy of religion. His most recent publications include "Indexicality, Phenomenality and the Trinity" in the International Journal for Philosophy of Religion (2015) and "Sorting out the Sortals: A Fregean Argument for Essentialism" in Erkenntnis (2015).

Virtual Reality on the Loose

On the Catholic Appreciation of Leo Strauss