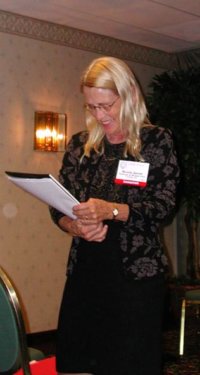 We share the sadness of the family of Beverly Jarrett at her recent passing.  All members of the Voegelin community are deeply in her debt for the contribution she made to the publication of the Collected Works.  It stands as a fitting testament to Beverly’s four decades of work in scholarly publishing.  Beginning as a copy editor at Louisiana State University Press, she rose to become Managing Editor and Executive Director of the press that brought forth the five volumes of Order and History.  Beverly worked with Voegelin on the fourth volume, The Ecumenic Age, and oversaw the publication of the fifth volume, In Search of Order.  In 1989 Beverly assumed the position of Director and Editor-in-Chief of the University of Missouri Press where she remained until her retirement.  It was at Missouri that she placed her distinctive stamp on the world of academic publishing as she transformed a regional press into one with strong claims on national and international visibility.  With considerable verve she embraced the challenge of publishing The Collected Works of Eric Voegelin, a project that eventually extended to 34 volumes.

The individual editors of those volumes will certainly attest to the joy it was to work with Beverly.  But it was the editorial board of the collection, Paul Caringella, Jürgen Gebhardt, Thomas Hollweck, and Ellis Sandoz, who had the closest acquaintance with her formidable capacity to surmount all obstacles.  None could fail to be impressed with Beverly’s sheer indomitability.  With unfailing good grace and good humor, she knew where she wanted to go and was invariably successful in drawing the rest of the world along with her.  Once Beverly had given her word and staked her commitment one knew it was bound to succeed.  It was in this way that she was able to accomplish so much, not only for Voegelin’s work and political philosophy, but for the major impact that the University of Missouri Press was to have on Southern literature and literary studies more broadly.  She presided over several expansionary initiatives that, in retrospect, now appear as the heyday of scholarly publishing.

To individual authors, especially younger ones, Beverly was a godsend, a reassuring presence that made the daunting publication process far less intimidating.  Her periodic reports at the business meetings of the Eric Voegelin Society were a particular pride and joy, as the members received tangible evidence of the large collaborative enterprise of which they had become a part.  The genuine sense of community that revolved around Beverly’s yearly updates was the experiential highpoint of the meetings.  Much of it had to do with her infectious personal charm, made all the warmer for its unmistakably Southern style.  Looking back on the years when we had the pleasure of working and interacting with Beverly, we realize we were privileged to enjoy her unique and canny way of going about life.  Without Beverly Jarrett the world would have been a far drearier place. May the angels welcome her into Paradise, and may her family and friends continue to treasure her memory as her good works continue to bear fruit.

Please Contribute to VoegelinView!
The Priority of the Person Event
The Constitutional Convention and Political Participation in the Early Republic Event
R.I.P. Fritz Wagner