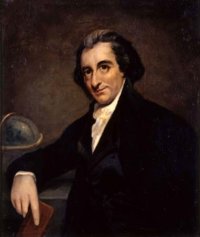 Thomas Paine is perhaps best known for his effective pamphleteering during the American Revolution, especially in “Common Sense” and “Crisis.” But his major book-length works, “The Rights of Man” and “The Age of Reason”, which articulated his views on political rights and religion, were less well received by many.  The Age of Reason, in particular,  earned him considerable enmity in his chosen country, the newly formed United States, since it was viewed as an attack on social tradition and conventional religion.  This work of forthright argument about religious belief stands out, historically and philosophically, as a bold assertion of the strong rationalism arising from the Enlightenment and the French and American Revolutions of the late 17th Century.

On re-reading The Age of Reason I was brought to recall the impression of my first youthful reading: here was someone who was more than a polemicist and fervent revolutionary, he was also a determinedly independent thinker who presented cogent and clear arguments for his ideas.  These qualities continue to impress despite the passage of more than two centuries and may be read to foreshadow some contemporary political conflicts.  A more recent reading, especially of The Age of Reason, has brought to mind the ongoing conflict between those who insist on a fideistic approach to life and civilization in which the claim to certainty of knowledge derived from faith is paramount and those inclined to rational and empirical approaches; that is, the perceived conflict between religion and science.  That conflict, it seems to me, is no less intense and fraught with meaning for the present and future than it was when Paine addressed his critique of religion, subtitled “being an investigation of true and fabulous theology,” to his fellow citizens of the United States almost 225 years ago.  In the preface/dedication to The Age of Reason, Paine makes his position, expectations, and intentions clear:

To my fellow citizens of the United States of America

I put the following work under your protection.  It contains my opinion upon religion.  You will do me the justice to remember, that I have always strenuously supported the right of every man to his opinion, however different that opinion might be from mine.  He who denies to another this right, makes a slave of himself to his present opinion, because he precludes himself the right of changing it.

The most formidable weapon against errors of every kind is reason.  I have never used any other and I trust I never shall.

Given the time and place in which he wrote this is a bold and courageous declaration taken near the end of his life under very uncertain conditions and one in which he deliberately challenged common opinion.  It remains a clear and resolute claim to the right of free speech.

Going beyond the Dedication and into the work itself it is of most interest here to see Paine’s linking of rationalism and empiricism not only to confront the fideistic tradition of religion and its insistent claims on social and political life but to lay claim to a future that must reflect the linkage between reason and empirical evidence –  to science, human progress, and politics and the purposes of government.  It may be appropriate to note that

Paine wrote to speak to his “fellow citizens” not merely to an intellectual elite, and wrote the Age of Reason under no less revolutionary turmoil than he wrote Common Sense.  Also, he wrote as what he was, a passionate advocate of reason and deism able to advocate and persuade in simple and clear argument eschewing the obtuseness, but lacking the subtlety, that so often characterized more sophisticated political views and theories.

Even though Paine advanced a theology of Deism, it bears only distant relation to the religious fundamentalism of today with its personalized Godhead and is akin to views such as Jefferson’s and others of the time that favored an impersonal Prime Mover, but he found justification for it in the universal evidence of natural creation in the universe.  He tried to link known and knowable  evidence from existence in support of his version of theism through the application of reason.  He sought evidence to support reason, not reason to support evidence of faith.  “To make room for the hag of superstition…”, he argued, religion (Christianity) has “…abandoned attention to creation itself,” that is, it set aside the evidence freely available in nature in favor of a mysticism (based on fables, in Paine’s view) and fideism in which belief becomes its own justification. On this basis,  religions assert the primacy of belief  over reason and empirical fact to which Paine countered with a firm belief in reason reliant upon evidence.  His morality is derived from reason, not revelation.  For him, “…it is from the study of true theology (the study of all nature) that all our knowledge of science is derived and it is from that knowledge that all the arts have originated.”

Fideism requires that that which is impossible to prove by reason and evidence can only be asserted by beliefs in that which is otherwise unknowable.  Paine captured the logic of the case by writing: “A thing which everybody is required to believe, requires that the proof and evidence of it should be equal to all, and universal…”  Even with his commitment to reason and empiricism, Paine advanced a version of deism in which the “word of God is the creation we behold” and it is in this “that God speaks universally to man.”  Thus, it seems, Paine did not reject the existence of God as a tenet of faith but did insist that it be based upon empirical evidence that could be seen in nature.  Again, in keeping with many leaders among his contemporaries, he argued, “the principles of science lead to this knowledge; for the creator of man is the creator of science.”

Clearly, Paine hoped that free people enjoying rights naturally theirs would exercise reason and observation to liberate themselves from mysticism and fabulist belief, thus abandoning claims to knowledge by faith in favor of knowledge gained through reason.  Combined with the study of nature in its  largest empirically knowable sense this would allow humanity greater and more rational control of its destiny.

Today, of course, the doctrine of natural rights, even rationalism generally,  is philosophically suspect and, for many, the notion that science is the sole or primary path to essential knowledge is derided as scientism and a failure to recognize transcendent truths.  Nevertheless, reading Paine again can inform us about some of the conceptual framing and reference points of contemporary politics and society.   In particular, it should underscore our appreciation of the deep divides in the United States, Paine’s chosen land, significantly linked to socio-political cultures and mentalities reflecting essential fideism, on the one hand, and rationalism and empiricism, on the other.  (Paine’s advocacy of a sort of graduated or progressive income tax in the Rights of Man is another indication of how his thinking foreshadowed and anticipated contemporary politics, but that may be subject to another essay.)

Paine, and other rationalists of his time, held expectations for humans as rational beings that may seem overly simplistic and optimistic, now challenged not only by continuing philosophical examination but, perhaps ironically, by the findings of modern neurological and behavioral sciences.  Yet, we can perceive not only a continuation of a divide between religious culture and rational/scientific culture into our own time but its secularization in conservative views of capitalism (an ideological form that did not take shape as such until some time after Paine’s death), and contemporary liberal views of government as an agency for human improvement.  Paine repeatedly sought the basis and means to achieve “good government” as the promoter and guarantor of liberty not merely to be restrained as the primary threat to liberty.

Indeed, Paine appears to have anticipated a more contemporary perspective, also linked to some of the impulses extant in the founding of the American Republic, that seeks a government responsive to popular needs and able to address them by expanding and distributing the conditions of liberty while, at the same time, seeking the restraints on government to be gained from a sound constitution.  Implicitly, it is possible to read Paine’s argument as an attempt to deal with the question of abusive majorities by enhancing rationality among all citizens while imposing upon government the difficult task of protecting the freedom of dissenting opinion despite majority wishes as a fundamental way to allow reason to invest the polity and assure its progress.  It may be certain that Paine did not expect more freedom and a better world to emerge from less government but rather from better government formed and driven by reason among both governors and governed.

David Weaver is Professor Emeritus of Political Science at Saginaw Valley State University. He received his Ph.D. from the University of Cincinnati in Political Science. His major areas of interest include foreign relations and political development, political thought and theory, and, primarily, leadership and democratic theory and practice.

What Can the Puritans Teach Us About Philanthropy?

Why We Still Need Plato

Solzhenitsyn at One Hundred