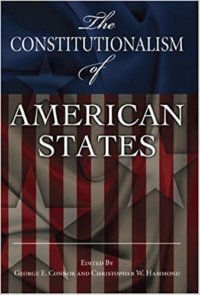 With a Starbucks or Walmart on almost every corner the temptation is to think little has changed when one crosses a state line, other than, perhaps, a lower sales tax.  It is only when state governments re-assert their police power on issues involving health, safety, and morals that one remembers Americans are dual citizens in a system of government that is “partly federal and partly national.” Some work has been done by political scientists in comparing the institutional arrangements of states and how such things as mode of judicial selection and term limits affect outcomes.  What seems to be missing in some of this work is an understanding of the particulars of time and place that can be lost in aggregate work.

In this collection of fifty essays, one for each state, Connor and Hammons have not only produced a book of considerable value for the comparative study of state constitutions, they have also brought to the forefront the importance of the historical and the political development that has taken place in every state. This volume provides the needed source material to begin to understand each state, with every essay providing good citations for further research.

The volume is dedicated to Donald Lutz, who contributed the Forward–a charming account of how the study of state constitutions came to be important to him. Lutz describes eight functions of written constitutions, among them: defining a way of life, distributing political power and limiting governmental power. These functions form the framework used by the contributors in their essays.

The fifty essays are grouped by region, which is helpful since the constitutional development of a state is often shaped by a neighboring state.  For example, Connecticut and Rhode Island are formed in response to the Massachusetts Bay Colony. Then there were the western counties of Virginia breaking away from Virginia during the civil war to form West Virginia.

The book provides a wealth of comparisons among the institutional designs in the states and how those designs reflect meaning within the states. A thorough index is also provided that allows the reader to follow important themes and find critical court cases in state politics. States are understood, throughout the volume, as complex places of cultural, ethnic, and industrial change. For comparative purposes it might have been better if each contributor had been required to address all eight functions described by Lutz in his Forward, but then other important aspects of the constitutions might have been neglected.

Most entries contain excellent accounts of the development of suffrage and citizenship, with considerable attention being paid to the civil rights developments for African Americans and women. For instance, one learns that the state of Louisiana developed its public school system in response to the abolitionist movement. This can be compared to recurrent themes in the history of the state of Pennsylvania ab0ut building a society that aims at virtue, liberty and independence and especially, religious tolerance.

Constitutions are agreements about how political power is to be distributed and arrangements reflect decisions about how much confidence should be placed in the various branches of government. An example: Virginia’s historical mistrust of executive power and preference for legislative power goes a long way in explaining why their legislature makes the judicial branch appointments.

Many of the themes and debates in American politics first occur in the states. Several states are significantly older than the United States and did in fact serve as “laboratories of democracy” for the founding of the country. For example, Rhode Island turns out to be unique in not having a tradition of separation of powers and in  affording “home rule”  to cities and townships through its constitution. Also, Pennsylvania, for a time, experimented with a plural executive.

The constitutions of the states are changed more easily and frequently than the US Constitution, and these changes, evolving out of the old constitutions, reflect new directions for a state’s citizens. The political contests over vigilance and responsibility, religious tolerance, what laws are fundamental (and thus belong in the constitution), and what should be left to future generations to decide, are all contained in these essays. Thomas Jefferson’s hope that each generation would have the opportunity to ratify its constitution was realized in several states at various times in history and can still be found in a few states today.

Almost all of the essays do a nice job of showing historical development. One might have hoped for a more detailed account of the link between the puritan founding and the constitution of Massachusetts but then only so much can be done in an essay.

The entry on Wisconsin’s decision to reject the populist constitution of 1846 for the more classically liberal arrangement of 1847  shows clearly how concepts and proposals that do not get adopted do not simply disappear. The progressive’s ideals of accountability and openness, successful or not, led to the non-partisan, unicameral legislature in Nebraska that is still in operation today.

Some scholars think studying state constitutions is a waste of time, that there is a lack of language worth studying in these documents.  What they miss is that state constitutions must be understood, “forward and backwards in time,” as the entry on Wisconsin tells its readers. State constitutions reflect fundamental values of the founders of a state and help shape future generations in a “way of life.” If one wishes to understand American political development one should also consider developments in the states.

To understand a state constitution one must first try to understand what the various articles and amendments meant to particular individuals at various times.  It is in trying to grasp the meaning in the little universes of order that are the states that this book will be helpful. As Justice Sandra Day O’Connor wrote for the Court in the U.S. Supreme Court decision New York v. United States:

“The Constitution does not protect the sovereignty of States for the benefit of the States or state governments as abstract political entities, or even for the benefit of public officials governing the States. To the contrary, the Constitution divides authority between federal and state governments for the protection of individuals. . . .” (New York v. United States et al., 505 U.S. 144, 181-82)


“Just as the separation and independence of the coordinate branches of the Federal Government serve to prevent the accumulation of excessive power in any one branch, a healthy balance of power between the States and the Federal Government will reduce the risk of tyranny and abuse from either front.” (Gregory v. Ashcroft, 501 U. S., at 458)

In order to understand how a state constitution affects individuals one must immerse onself into the law and history of that state, and this volume offers a suitable starting point for understanding any of the fifty quasi-sovereigns that comprise the nation. In that respect it is a truly fitting tribute to Donald Lutz, who says in his Forward that his “idea of a good time is to curl up on the sofa to read a newly discovered constitution.”

Rodolfo Hernandez is an Associate Editor of VoegelinView and a Lecturer in Political Science at Texas State University.

Cents and Sensibility: What Economics Can Learn from the Humanities

The Magical World of Islam

The United States Constitution in Film