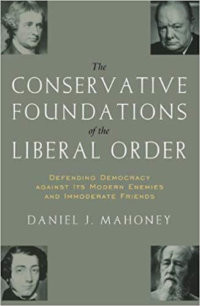 This sibling bond and rivalry recalls just how close modern conservatism and liberalism are; however, Mansfield argues that in becoming too close for comfort, or altogether comfortable in their closeness, a potentially fruitful rivalry has lost its edge: liberalism has become “too dispirited” and conservatism has given up the difficult task of invigorating and ennobling it. This lack of spirited resolve on both sides has grave consequences for the present liberal political order; mutual pusillanimity makes way for various kinds of radicals, ideologues, and vehement opponents to the present regime.

Daniel J. Mahoney’s latest book is a spirited defense of modern democracy in light of the fact that our order is liberal but its foundations are conservative. He argues that “[t]hose who wish to preserve free societies are necessarily both conservative and liberal” and that “there can be no liberty without authoritative traditions and institutions.” Failing to understand this connection–this relationship in tension, and thus the need for prudential balance–gives rise to any number of theoretical and practical errors.

Enthusiastically embracing liberalism at the expense of conservatism, for example, engenders “dogmatic egalitarianism,” “the ideology of consent,” and adherence to “democratic monomania,” among other derailments. In short, immoderate liberalism cannot help but be co-opted and confined by the logic, or logos, of indefinite progressivism. On the other hand, a stubborn conservatism that refuses to recognize “the legitimacy of egalitarian aspirations not only as a matter of justice but . . . to safeguard the full range of values that are integral to any social order” is likely to be perceived as “reactionary,” antiquarian, and rhetorically misaligned. Immoderate conservatism, as it were, falls into the similarly singular, albeit inverted, logos of declinism. Thus, Mahoney outlines a combination of liberalism and conservatism in mature form, or what he refers to as “a conservative-minded liberalism.”

It is, to return to Mansfield’s metaphor, a liberalism that takes his younger sister seriously. No longer the butt of jokes as a weak nag, she is thoughtful and serious, with the purposeful means of addressing her elder brother’s vices–a virtuous sister who genuinely influences and chastens her sibling. Like the best examples of healthy sibling relations, there is both love and rivalry, and in this combination, together they may succeed in “defending democracy against its modern enemies and immoderate friends.” In orienting liberal theory beyond itself, and thus back to its conservative foundations–in bringing sisterly conservatism to bear on brotherly liberalism–The Conservative Foundations of the Liberal Order “aims to contribute to the revitalization of political and spiritual reflection that will allow democratic man to navigate the dangerous waters of postmodern, relativistic democracy.”

For democratic man to “see beyond liberal theory,” he should be open “to ‘metaphysical’ claims about liberty, human nature, and natural justice,” develop “a respect for the political framework of democratic self-government, which is the nation-state,” and support the biblical religions as at least an important source of ethics, self-restraint, and orientation beyond the material and phenomenal realms. Moreover, the conservative-minded liberal in a modern democracy cultivates a “respect for statesmanship rooted in the best Western and American political traditions.”  Such being the case, Mahoney emphasizes the “twin pillars of a human and civilized order,” namely, magnanimity and humility–one might even say the manly and feminine virtues par excellence. If one finds the sex (or, as we say now, “gender”) metaphor unconvincing, or gratuitous, we should recall that Alexis de Tocqueville writes in Democracy in America, “it is woman who makes mores,” and mores are, in general, “the sum of the intellectual and moral dispositions that men bring to the state of society.” They are integral to the foundation that substantiates and preserves the political order.

Mahoney’s work is bookended by Tocquevillian chapters. The first is a discussion of Tocqueville himself–a thinker who “matches the description of both a ‘conservative liberal’ and a ‘liberal conservative’”–and how his understanding of the “democratic revolution” “provides the larger framework in which the contingencies of our political and intellectual lives unfold.” Tocqueville is arguably one of the supreme guides for preserving the “moral contents of life” and for coming to understand and live the “politics of prudence.” Doing so means recognizing that simply theorizing about democracy, as many social scientists are wont to do, is alone insufficient, yet we learn from Tocqueville that “we must draw upon its practice to correct its theory.”

Mahoney’s last chapter is on Raymond Aron, one of the twentieth century’s greatest French political thinkers who did much to restore Tocqueville’s importance to a French climate of opinion that was rife with apolitical and antipolitical ideologies and forms of illiberal thought. Mahoney’s deep familiarity with Aron stretches back to his first work, entitled, The Liberal Political Science of Raymond Aron: A Critical Introduction (1992), in which he demonstrates, among other things, the “permanent contemporaneity of Aron’s thought.” While Aron’s work is indeed a “rich and impressive résumé of the great issues, conflicts, and events of the twentieth century,” it is far from being only this, for while Aron “helps us to understand the politics and history of the twentieth century . . . even more importantly he helps us to reason about politics and history simply.”

In The Conservative Foundations of the Liberal Order, Mahoney returns to Aron to discuss his “model of democratic conservatism.” Aron’s speech and deed, his life and works, “embodied the best legacy of the Enlightenment while showing that the defense of liberty demanded courage and moderation as well as thoughtful self-critical, yet unhesitating fidelity to the inheritance that is Western civilization.” Aron is perhaps best understood as a supreme “civic educator” whose democratic conservatism was central to his deep sense of political responsibility. This responsible political outlook consists in the task of holding “synoptically the multiple values that we are trying to safeguard” and thus of “preserving indispensable but sometimes contradictory values,” something that Brian C. Anderson has otherwise called Aron’s “antinomic prudence” (and is illustrative of the sibling love in rivalry, or tension-filled synthesis, introduced above). This prudence “aims to moderate democratic impatience and dispel the illusion that some values can be maximized without damaging other goods that are indispensable for a free and decent human life.”

The eight other chapters between these first and last consist of a mixture of, on the one hand, critical discussion and thoughtful praise for thinkers and actors who similarly exemplify the prudential and preservative aspects of Tocqueville and Aron; and on the other, penetrating analysis and balanced criticism of those whose immoderation, impatience, and repudiation result in false pursuits and temptations destructive and corruptive to our liberal order. A few of the interesting details one finds include: a pairing of Mark Lilla and Pierre Manent on the “theological-political problem” and discussion of its ultimate insolubility thereby demanding continued mediation; an elaboration of greatness and statesmanship embodied in Churchill and de Gaulle, who were both true “friends of democratic liberty,” as each was willing to confront the limitations of democracy “and to do what is possible to address them within the bounds of prudence and decency.”

He also offers reflections on the challenges of the New Left, and why 1968 must be understood as more than a time of symbolic importance but as “that crucial turning point when modern democracy lost consciousness of civilized liberty as a precious inheritance to be preserved”; considerations of American foreign policy under President George W. Bush that was somewhat “too dismissive of the gray middle ground that more often than not defines the art of statecraft.” There is also an account of the transformation, or deformation, of later neoconservatism into a dogmatic democratic universalism, and thus a position that fails to appreciate the “tragic dimensions of history;” attention to Solzhenitsyn’s critique of “anthropocentricity” or “rationalistic humanism” and his call for “a renewed recognition and appreciation of the limits of any political project built upon the problematic foundations of the human will”; and an assessment of the merits and limitations of Michael Burleigh’s work on terrorism.

The Conservative Foundations of the Liberal Order is no mere academic exercise; Mahoney himself describes it as “a learned essay that is accessible to citizens as such.”  It is an insightful discussion from the perspective of the participant in a liberal order who has reflected deeply on its foundations. Even as readers may wonder about the degree to which the younger sister sufficiently embodies all the virtues of her older sister (namely, the third sibling of “classical conservatism that preceded liberalism,” and its great representatives, about whom Mahoney’s work only speaks indirectly) this book will boost the spirit of those likewise passionate about Defending Democracy against Its Modern Enemies and Immoderate Friends.

Trevor Shelley teaches at St. Mary's University in Calgary and is the author of Globalism and Liberalism: An Essay on Montesquieu, Tocqueville, and Manent (St. Augustine's, 2017).

Mysticism and Space: Richard Rolle, Julian of Norwicih, and The Cloud of Unknowing

The Wipe Out of the White Working Class

The United States Constitution in Film

Engineers of Jihad: The Curious Connection between Violent Extremism and Education