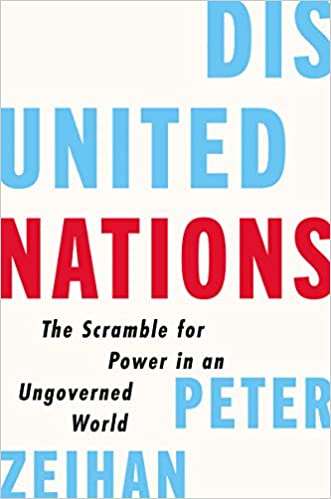 The 19th century philosopher G.W.F Hegel famously said, “The Owl of Minerva spreads its wings only with the falling of dusk.” What he meant by this cryptic statement is simple: historical theorists can only understand the mechanisms of history retrospectively, after events have already occurred. Predicting the future is thus a futile endeavor, according to Hegel, since grasping the vast array of interconnected variables that set the stage for novel historical events is beyond the capacity of any human being. Yet, forecasting the world’s future is precisely what the former Stratfor geopolitical strategist Peter Zeihen aims to do in his most recent title, Disunited Nations. Despite a frisky prose that at times seems to take away from his scholarly credibility, his breadth of historical, economic, political, cultural, and geographical knowledge cannot help but impress, leaving the reader to wonder whether Zeihen might prove Hegel’s adage wrong after all.

Disunited Nations attempts to answer the following questions: what would the world look like without American involvement? What would happen if the key ingredient that made possible the most connected, healthy, peaceful and prosperous era the world has ever known simply lefts its overseas bases and pulled out of the countless multilateral institutions that make up the American-led global order? This scenario, argues Zeihen, far from an intellectual thought-experiment, is not only a looming reality, but is actually already in the process of unfolding before our eyes. American strategic retrenchment on multiple fronts—military, economic, and diplomatic—will lead to a world left to fend for itself. The result? Disorder the likes of which the world has not witnessed since the conclusion of World War II.

In the European theatre, the disintegration of NATO will lead to renewed strategic rivalries among the European powers and the eventual collapse of the European Union. Without the security umbrella provided by the U.S. military, Germany will have no choice but to build its own, stoking the same fears among surrounding nations of an economically and militarily powerful Germany that were the norm in European politics prior to 1945. Asia faces an even worse fate, as the Sino-Japanese relationship was never able to achieve a post-war reconciliation on the model of the European powers. Animosity in Asia is alive and well, and so a more desperate geopolitical environment will only serve to ignite open conflict. China and Japan require safe shipping routes from the Persian Gulf for the large quantities of crude oil, among other material inputs, on which their economies depend. Without the U.S. Navy patrolling the seas to ensure safe shipping, or providing a modicum of stability in the Persian Gulf, China and Japan, as two of the most trade-dependent countries in the world, will have to duke it out for regional supremacy and the sea-lanes that make their economies possible. South America and Africa will also face diminishing economic prospects as the American absence begins to sink in.

For Ziehen, the winners and losers in the coming disorder are not necessarily the countries one would expect. Those countries that stand to gain: France, Japan, Turkey, and Argentina. Due to a medley of factors—demographic strength, insulating borders, resource abundance, mercantilist trade policy, among others—these countries will be by and large insulated from the coming disorder—that is, if they play their cards right. France has, by far, the healthiest demographic outlook in Western Europe (unlike Germany). Add to that its prime agricultural heartlands and the fact that it has made a concerted effort to remain at least somewhat economically and militarily independent of NATO and the E.U (unlike Germany), and France is well placed for significant strategic gains over the coming decades (unlike Germany). While Japan has one of the most quickly aging populations on the planet (like China), it has also made significant preparations for its impending population bust (unlike China). Its blue-water navy has projection power, and so can easily outmatch every other navy in the region to secure the supply lines vital to its economy (unlike China).

Turkey’s geographic placement make it an ideal thoroughfare for trade in an era of increasingly dangerous merchant shipping on the open seas. Its control of the Sea of Marmara and Istanbul’s location straddling the Bosporus—the only connection between the Black Sea, the Mediterranean, and the wider world—will result in improved strategic maneuverability on the political and economic fronts. In addition, Ankara’s military is orders of magnitude more powerful than those of its neighbors. As it has already done in Syria, Zeihen predicts that we will witness a Turkey that begins to reclaim parts of its old empire, citing border security as its primary motivation.

Argentina acts as the major wild card in Zeihen’s analysis. On the one hand, it benefits from one of the best climates in the world, as well as lands rich in mineral resources and agricultural potential. Its distance from every major power center will isolate it from many of the coming disruptions and wars. Unlike its neighbor Brazil, Argentina can look forward to a very healthy demographic profile in the decades to come. On the other hand, economic mismanagement and horrible political decisions have been responsible for hobbling Argentina in the past with massive inflation, capital flight, and sovereign debt defaults. Any future success will require significant reforms in just about every aspect of its economic and political structure.

In what one could only consider one of the great potential historical ironies highlighted in the book, America’s greatest geopolitical rivals—China and Russia—stand to lose the most from a world without American involvement. Indeed, one might even go so far as to say that the unspoken aim of the book is to debunk the myths perpetuated in the U.S. National Security establishment that Russia and China are on the brink of making a bid for their own version of global supremacy. With an impending demographic catastrophe, ruinous national debt levels, a whole host of antagonistic neighbors, an economy that relies almost entirely on the material inputs predicated on the US-led free-trade order, and some of the worst strategic geography on the planet, Beijing is so far from becoming a global hegemon that its greater concern over the next several decades should rather be staving off mass starvation and domestic political upheaval. Russia’s fate is not any better. Even with a last-ditch effort to reestablish some of its Soviet-era borders in the Baltics and elsewhere, its demise is only a matter of time, with its demographic profile trending towards economic collapse and the eventual endangerment of the Russian ethnicity itself. Chinese and Russian ambitions may be sizeable, but Chinese and Russian capacities are miniscule.

Surprisingly, within the confines of Disunited Nations, Zeihen does not even attempt to prove the premise on which all of his other arguments rely—specifically, that the U.S. is in fact beginning a period of strategic isolation. To get a more complete picture, one has to read his Absent Superpower, in which he argues that America’s shale revolution, stellar geography, and vast material resources, makes it much less dependent on the world than the world on it. The United States became a net exporter of refined petroleum products in 2011 and could provide for all of its own energy needs. What it lacks in other material inputs for its economy, it could easily source from within its own domain in the Western Hemisphere.

Even still, with all of its painstaking detail and sensible argumentation, the reader comes away from Disunited Nations somewhat unconvinced that its principal predictions will actually come to pass. It is incredibly hard to fathom, for instance, that America will simply pack up its bags and leave the majority of its overseas bases, or that its navy will stop patrolling the world’s oceans and let its ships rust in port. Indeed, while Zeihen is correct that U.S. troop levels have decreased in Germany, they have notably increased in Poland.[1] Furthermore, former Secretary of Defense Mark Esper recently spoke of adding more U.S. bases in Asia to help balance Chinese ambitions in the region.[2] Overall, Disunited Nations makes for a stimulating and informative read, full of unexpected insights and unorthodox conclusions. However, its driving thesis appears exaggerated in order to achieve shock-effect. It is definitely a read worthy of one’s time, so long as one does not forget that the Owl of Minerva has yet to soar.

[1] Karen DeYoung and Michael Birnbaum. “Trump says he will send some of the troops he is withdrawing from Germany to Poland.” The Washington Post, June 24, 2020.