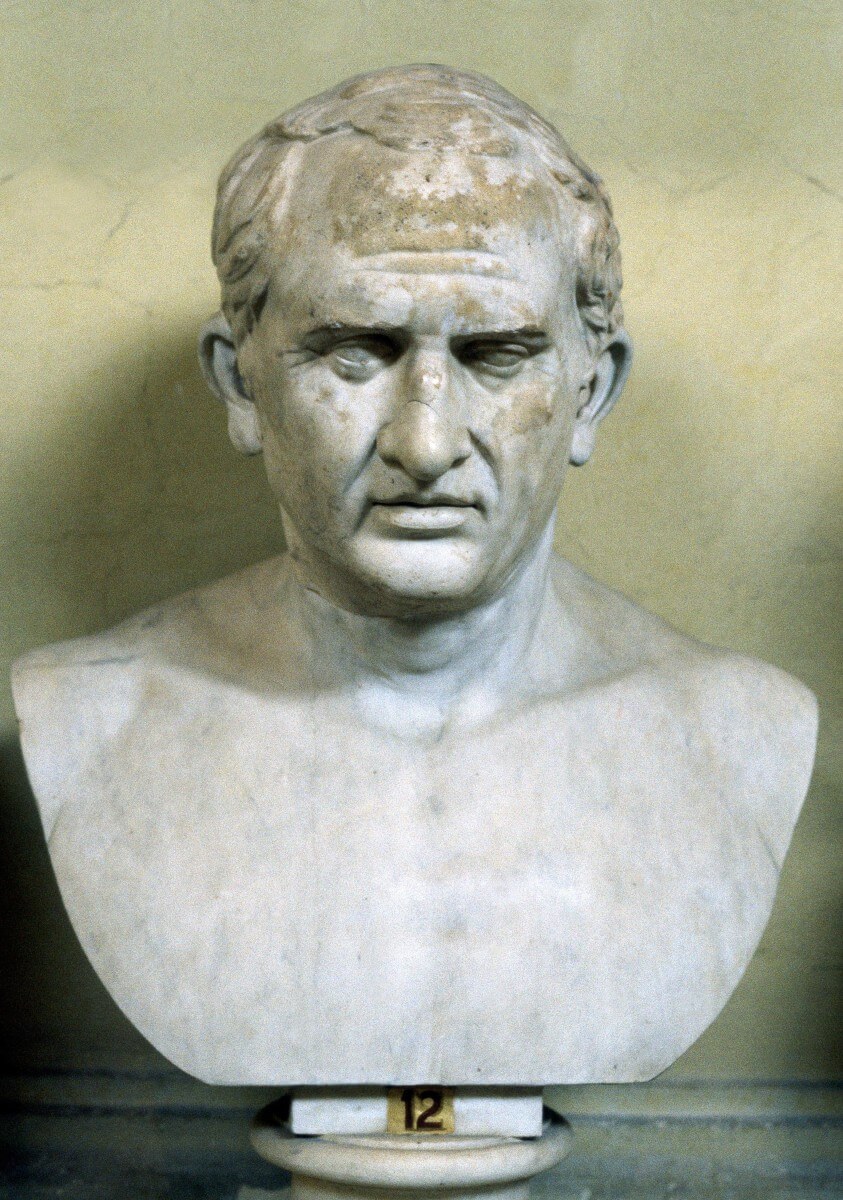 Five years ago, an institution of learning in my neighborhood began to throw out perfectly fine books. Works from Shakespeare to Tolkien to Wyndham were tossed from the English department, and from the library, works by and about Hardy, Conrad and Eliot were boxed and chucked. Seeing these books piled up in the dumpster inspired me to spend a few hours “dumpster diving” in order to save the most enduring works. One of them was Cicero’s The Nature of the Gods.

Other than reading a biography of Cicero by Anthony Everitt, I was ignorant of the Roman statesman and his writing. It was a delight to crack open this 2,000 year old book I hadn’t known existed, and find passages that broadened my appreciation of not only Cicero’s mind but Roman culture. Even more delightful was the experience of reading short passages from the book to grade 12 Religion Classes, and observing the interest the most imaginative students had in hearing the words of Cicero.

Cicero wrote The Nature of the Gods two years before his assassination. J. M. Ross’ introduction to the work emphasizes that Cicero had a very personal religious experience that inspired his late writings, brought on by the death of his daughter Tullia in 45 B.C. [1] Cicero understood that Tullia was now with the gods living an immortal existence, yet this did not console his broken heart. He read books on grief, but they did not help him, so Cicero began to write as a way of re-orienting his soul towards something hopeful.

It is worth noting that Eric Voegelin devoted a number of pages to Cicero in The New Science of Politics. [2] He suggests one fascinating thing about reading Cicero is that the reader is able to encounter a Roman thinker at the dawn of the millennium who lives firmly entrenched in the Roman universe amongst Roman gods. Cicero was not troubled by the challenge Greek philosophy presented to the “compact” experience of the Romans, spiritually and intellectually.

Cicero opens his work by acknowledging that a study into the nature of the gods could shed light upon “the nature of our own minds and also give us the essential guidance which we need in our religion.” He argues that the existence of the gods have been affirmed by “most philosophers,” and recognizes, probably based on his own soulful experience, that we are all “naturally inclined” to a belief in the gods. [3] In fact, early in Book I is a meditation on time and timelessness that places human affairs in their proper place, recognizing eternity as ineffable, [4] yet understanding that the “supreme power of the infinite” is “most worthy of our deep and steady contemplation.” [5] Cicero expresses a mystical understanding of the problem, knowing “the mind may plunge into space and in thought traverse it far and wide, yet never find that further shore where it may come to rest.” [6] The crux of the matter for Cicero in this contemplation of transcendent reality is, do the gods care about our existence, and do they participate in human affairs and the workings of creation? [7]

The importance of these questions transcends mere curiosity, or the personal needs of Cicero’s own heart. If the gods do not care about us, argues Cicero, then why should we revere them? Piety, like any virtue, “cannot long endure in the guise of convention and pretence.” [8] If reverence for the gods disappears, so too will “religion and sanctity go with it.” This will lead to anarchy and confusion, the end of brotherhood, and ultimately, justice. Cicero may have been inspired to contemplate the nature of the gods through a painful experience of our mortal existence, accompanied by an experience of timelessness where he understood the dead walk with him, but it seems he quickly found himself tackling a subject of great importance for the Roman society he cared deeply for.

Ideas supporting the argument that the gods care about us include remembering the wonders of creation. Whatever the philosophical weight of these arguments, for the layman like this reader, Cicero reveals a stunning breadth of knowledge which the Romans had accumulated of the natural world. Whether discussing the miracle of the human ear with its inner workings, the instincts for self-preservation and survival of wild animals like ducks, [9] the manner in which geese migrate, the movements of the moon and sun, and the order of the larger universe where the world is understood to be a globe, “drawn in upon itself by its own gravity,” [10] it is clear that the Romans’ comprehension of the physical universe was broad and deep. This included a knowledge of landscapes beyond the control of Rome, such as the nature of the Indus River, in faraway India.

Creation is ordered for our well-being, so the argument in Book ll goes, and since nothing intelligible and intelligent can come from an unintelligent source, the gods must care for the well-being of all people. This philosophical inquiry leads the search beyond the confines of Roman culture. If the gods care for all people, then the gods must also care for the neighbours of Rome who “share with us these lands between the East and West,” in Europe, Asia and Africa. The gods must not only love the citizens of cities, but individuals wherever they may be. In the end, “there was never a great man without some breath of the divine,” so to argue against the gods is “a sinister and impious habit, whether it springs from conviction or from mere pretence.” [11]

Book lll, containing a much less sympathetic approach to the problem of the nature of the gods, includes a scathing report of the “crowd” of gods found not only in Rome but in various cultures outside of Rome, [12] suggesting something is amiss in the human understanding of the densely populated heavens. The sufferings of creation and the follies of man are also emphasized to suggest the gods do not care for us. Men misuse reason, suffer all sorts of problems including mortal diseases, and never attain wisdom. If the gods cared for us, “then they ought to have made all men good.” [13] These arguments end without a proper counter argument because Cicero’s text has not survived the passing of time. Before Book lll ends, however, there is a wise and kindly conclusion, suggesting that any criticism of the nature of the gods “was not said in denial of their existence, but to make you realize how difficult a question this is and how dubious is every theory which has been evolved to answer it.” [14]

The Nature of the Gods is formatted as a dialogue involving arguments by Stoics and Epicureans, with a healthy dose of Cicero’s understanding of Greek philosophy thrown into the mix. Except for those readers graced by a solid, classical education, the “Introduction” to any translation of Cicero’s book will be required reading. This background reading will bring order to the text, and insight into Cicero’s ideas, beginning with the characters he develops for the dialogue. In my edition, Ross actually carries on Cicero’s work in an appendix, and here we see a hint of Voegelin’s observation about Cicero’s “compact” experience of the transcendent. Ross observes that the Stoics and Epicureans could not clearly recognize that God is not part of the created order, but remains a transcendent Creator mysteriously influencing people in Creation, and that refutations against their arguments need not have detracted in any way from the reality of God’s existence. The question that is not asked by Cicero, argues Ross, is “can there…be morality or truth or great art unless they derive from an…ultimate realm of a different kind from our relativities?” [15]

In the Introduction to my edition, Ross suggests this work by Cicero—with some exceptions—has not been well read over the centuries, and there have been times when it has been mistreated, as when Calvin set the work up as a straw man in order to carelessly knock it down in the name of his own Christian doctrine. There is also a clear enough hint that maybe Cicero’s work is no longer that important in the grand scheme of things. Having read many fine books that study the works of people such as Plato and Saint Augustine, to name two “book ends” that surround Cicero’s work in time, this may well be the case. I can only say that reading Cicero has been a very stimulating and sometimes surprising experience for me. So, if you pass a dumpster someday, and you see Cicero’s The Nature of the Gods lying there, I would personally recommend it worth the effort to retrieve the book. Who knows, it may be the last copy on earth. My edition is starting to fall apart.

1. The Nature of the Gods, by Cicero. Translated by Horace C. P. McGregor, with an introduction by J. M. Ross. Penguin Books, 1978, Great Britain. Introduction, pages 19 and 20.

2. The New Science of Politics, by Eric Voegelin. Found in The Collected Works of Eric Voegelin, Volume 5, Modernity Without Restraint. University of Missouri Press, 2000. Pages 159-162

Why Musicians Need Philosophy
Reflections on the Capitol Riots
Between Order and Disorder: Ernst Jünger on the Marble Cliffs
Winged Words: Reading and Discussing Great Books