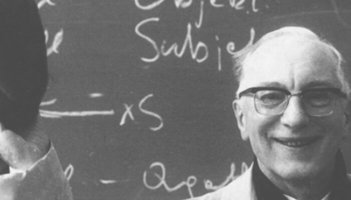 Of all the major non-leftist thinkers of the twentieth century, Eric Voegelin (1901-1985) remains, perhaps, the most difficult to understand. While some of his ideas simply pop off the page, most linger in some kind of morass of stumped curiosity within the brain of even the most willing. Indeed, even the most dedicated conservative scholars have to slog through much of Voegelin’s thought. Several conservatives have, indeed, produced brilliant analyses of Voegelin. In particular, one should begin a study of Voegelin with the works of Ted McAllister and Michael Federici — though, perhaps, one should read them in the opposite order. Dr. Federici’s book on Voegelin offers one of the best introductions ever written to any figure, while Dr. McAllister’s explore the absolute depths of Voegelin’s most complicated thoughts.

Born in Cologne, Germany, January 3, 1901, Eric and his family moved to Vienna when he was nine years old. There, often under the guidance of Ludwig Von Mises and the Mises Circle, Voegelin revealed his stunning intelligence. Earning a degree in Political Science from the University of Vienna in 1922, Voegelin then studied at Oxford with Gilbert Murray and in the United States with John Dewey, John Commons (economist), and Alfred North Whitehead. Armed with his advanced degrees from a variety of the most prestigious institutions in the English-speaking world, he returned to Germany and found himself confronting the terrors of the National Socialists. In his attempt to take them down for their racism and superstition, he wrote four books: Race and State; History of the Race Idea; The Authoritarian State; and The Political Religions. The Nazis confiscated the final of these works, The Political Religions, just as it was about to go to press. Though they attempted to arrest Voegelin, he ably escaped to the West in a rather heroic fashion as he describes in his autobiography.

Probably his best known works among conservatives are his The New Science of Politics (1952), Order and History (four volumes, the fifth never completed), and his inaugural lectures at the University of Munich, Science, Politics, and Gnosticism. Since his death, a huge volume of his unpublished books, under the title, History of Political Ideas, have appeared.

Beginning with his University of Chicago Lectures, The New Science of Politics, Voegelin built upon an idea that he had first taken from a footnote in a work written by the famous theologian, Hans Urs Von Balthasar, namely that symbols matter: not only how we define symbols, but how we remember them, how we appropriate them, and how we manipulate them. One might think of the Roman fasces — the bundle of sticks, wrapped around an axe, and tied together by leather straps. As its origin, the fasces was the perfect symbol of a republic. All organic — the straps as well as the sticks — the community forms one man, ready to defend itself. Not made for aggression (hence, the axe at the center of the group), a republic does however ably defend itself against all aggressors. In the 1910s, Mussolini very ably perverted that symbol. This is an obvious example, of course.

When it comes to words as symbols — words such as order or freedom — the manipulations of them becomes much more complicated. When the president behaves as a tyrant rather than an executive, but does so “in the name of American democracy” or “on behalf of the American people,” a clear response to him becomes confused and difficult. Voegelin labeled this manipulation of symbols a form of “Gnosticism,” taking the name from the ancient Christian heresy. Those who manipulate, he argued, know exactly what they are doing. They are master actors and masters of deception. They call “evil” good and then ignore the word “evil.” Often, though, their motives are well-intentioned, as they desire to flee from the ills and disorder of this world, which confuse and befuddle them.

Gnostics appear under many different labels, all rooted in the same mistakes. They can call themselves fascists, communists, National Socialists, progressives, Marxists, positivists, and or psychoanalysts, but they are all the same, just varied. In one of his most famous passages, written for his University of Munich lectures, Voegelin claimed:

“The attempt at world destruction will not destroy the world, but will only increase the disorder of society. The gnostic’s flight from a truly dreadful, confusing, and oppressive state of the world is understandable. But the order of the ancient world was renewed by that movement which strove through loving action to revive the practice of the ‘serious play’ (to use Plato’s expression)—that is, by Christianity.” (Voegelin, Science, Politics, and Gnosticism, 12).

In essence, Voegelin believed, each of these Gnostics wanted to murder God.

The death of the spirit is the price of progress. Nietzsche revealed this mystery of the Western apocalypse when he announced that God was dead and he had been murdered. This Gnostic murder is constantly committed by the men who sacrifice God to civilization. The more fervently all human energies are thrown into the great enterprise of salvation through world-immanent action, the farther the human being who engage in this enterprise move away from the life of the spirit. And since the life of the spirit is the source of order in man and society, the very success of a Gnostic civilization is the cause of its decline. A civilization can, indeed, advance and decline at the same time—but not forever. There is a limit toward which this ambiguous process moves; the limit is reached when an activist sect which represents the Gnostic truth organizes civilization in an empire under its rule. Totalitarianism, defined as the existential rule of Gnostic activists, is the end form of progressive civilization [Voegelin, New Science of Politics, 131-132]

None of this should suggest that Voegelin saw only decline in the world. He actually held out much hope for the world. The way to combat the evils of the world is to remember. Truly, simply to remember. To remember the beginning of a thing, the truth of a thing, and the beauty and goodness of a thing. This subject, however, is for another essay.

Until then, “don’t let them immanentize the eschaton.”


This was originally published with the same title in The Imaginative Conservative on February 1, 2016.