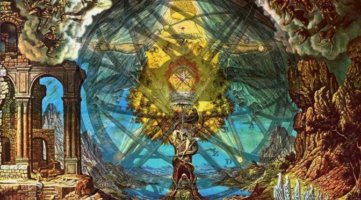 In my previous essay, “Eric Voegelin: A Primer,” I had the privilege to offer a brief sketch of this German intellectual’s life and thought. In this essay, I would like to explore one of Voegelin’s three most important ideas: his critique of Gnosticism. As in the previous essay, I am drawing heavily upon the fine scholarship of Ted McAllister and Michael Federici.

Voegelin believed that the ancient heresy of Gnosticism pervaded the modern world, perverting our understanding not only of time and history, but also the very nature of the human person. The Gnostic, he believed, hates this world, seeing it as a trap, a means by which our soul becomes imprisoned and lost in the desires and limitations of flesh. As such, Gnosticism is inherently dualistic and anti-Incarnational. Indeed, the very idea that the flesh and the spirit could become one is the antithesis of Gnosticism, which sees the relationship as one of tyranny, mistrust, and even hatred.

Though we associate Gnosticism with early Christianity, especially with the warnings against the “anti-Christ” in the writings of St. John the Beloved, Gnosticism actually emerged in the Near East and Asian Subcontinent roughly 600 years before Jesus lived. When Jesus lived and died, however, the Gnostics saw him as the perfect vehicle to promote their own vision of the world. They did not necessarily love Jesus; they simply saw him as a popular figure whose memory and image could be manipulated for their own purposes.

As Voegelin rightly notes, for the Gnostic, man will always be an alien in this world, and he must always seek a way out. As such, Voegelin quotes a number of ancient writings to support this:

As Voegelin saw it, Clement of Alexandria best grasped the heresy’s essence as well as its dangers. It is “the knowledge of who we were and what we became, of where we were and where into we have been flung, of whereto we are hastening and wherefrom we are redeemed, of what birth is and rebirth.” Consequently, all Gnostic myth — and, the Gnostics were, unfortunately, incredible mythmakers — revolves around the story of exile and return. In Gnostic belief, therefore, the Judeo-Christian God (not Jesus, but God the Father) is the evil one. Why? Because he delights to place souls into the prison of a human body, suffocating them in a physical world.

The “true God” according to the Gnostics has become hidden and alien to us. He yearns for us to love him, but we must spend our existence finding him. As such, salvation arrives in the form of ecstasies and enthusiasms, in magic, in terrorism, and in mystery cults. The true Gnostic must either embrace total sensuality — thus mocking the norms of puritanism — or must embrace an ascetic puritanism, thus making oneself clean of the things of the flesh. Terrorism is also good, according to the Gnostic, as it is simply violence against the evils of the material. Those who discover the means of salvation — through secret words, symbol-covered garments, or a sequence of words — share these secrets, these keys to heaven, only to a few, to the chosen, to the elect.

The goal of the gnostic in this world becomes one of re-ordering it towards his own vision: namely, that material is evil and spirit is good. Gnostics, of whatever variety, therefore, desire to reorder man, history, and society, all of which are traditionally unjust. Through Gnostic man’s creative power, he has the ability and the duty to recreate the world as just and perfect. Nearly any inhumane means becomes justifiable to the Gnostic, as the flesh is evil. Therefore, killing, for example, becomes perfectly acceptable to the Gnostic. It releases not only the individual soul trapped in the body, but killing also reminds the population of the dangers and limitations of the flesh. Most importantly, Voegelin notes, all Gnostics must murder God, whether symbolically or actually.

Of modern Gnostic prophets (not actors), Voegelin argued, the most important, by far, was Friedrich Nietzsche. As Voegelin often does, he supports this contention with a series of quotations from the German philosopher:

Just as Paul Elmer More and Christopher Dawson argued, Voegelin saw Nietzsche as the most important figure in modern Gnosticism. While some scholars have blamed Nietzsche for the rise of modern German nationalism, National Socialism, and other evils, Voegelin believes this misses the entire point of his importance and his Gnosticism. We must dismiss, he argues, the notion that Nietzsche in some way caused the problems of modernity: “the very popular magical belief, of which Nietzsche like many other political thinkers has been a victim, that the political analyst who predicts an event is the cause of the event.”[1]

Instead, Nietzsche is simply the prophet — the greatest — of the modern world. In 1886 Friedrich Nietzsche wrote, “The greatest event of recent times–that “God is Dead,” that the belief in the Christian God is no longer tenable–is beginning to cast its first shadows over Europe.”[2] Thus de-spiritualized, “our whole European civilization is moving with a torture of tension, which increases from decade to decade, toward a catastrophe,” Nietzsche wrote three decades before World War I. Strangely enough, the mad philosopher argued, the coming destruction would result from a “war of the spirits.”[3] To confront the Gnostic idea, now deeply ingrained in all of modern and post-modern society, man must re-embrace and re-discover the ancient verities of Socrates and Dante and the American Founders.


This was originally published with the same title in The Imaginative Conservative on February 16, 2016.

Boston Marathon Bombers and the Pathology of Terrorism

Morality and Intuitions of Metaphysical Truths