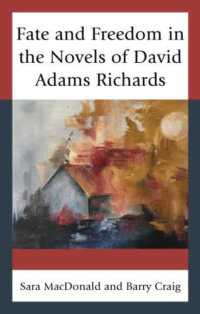 David Adams Richards is a Canadian novelist and member of the Canadian Senate (nominated by Prime Minister Justin Trudeau and appointed in 2017).  Born in 1950 in Newcastle, New Brunswick, Richards is the celebrated author of sixteen novels as well as numerous poems, short stories, essays, and plays.  Prior to the publication of Sara MacDonald’s and Barry Craig’s book on Richards’ work, there was one other book-length scholarly treatment of his work (Tony Tremblay’s David Adams Richards of the Miramichi),[1] which focuses on Richards’ work published prior to 1989.  MacDonald and Craig treat Richards’ more recent works (The Friends of Meager Fortune 2006; Mercy Among the Children 2000; The Lost Highway 2007; Crimes Against My Brother 2014), and rather than emphasize the biographical roots and literary influences on Richards’ work, they explore instead the ways that Richards’ novels embody an underlying philosophical, religious, and metaphysical framework.

MacDonald and Craig point out that many of Richards’ readers find his stories to be bleak and pessimistic depictions of “violence, darkness, and despair.” (p. xi)  In contrast, the authors find that Richards’ novels, though consistently dealing with tragic themes, nevertheless affirm the fundamental reality of joy, freedom, and self-sacrifice. Richards’ characters are caught between their attachments to finite things, for which they may sacrifice the good of others, and the good of their souls, which draws them to sacrifice themselves and find a greater joy and freedom in “the infinite and eternal worth of another.” (p. xvii)

The authors have chosen a subset of Richards’ novels containing similar themes and settings and featuring some of the same characters.  Each of the selected novels plays out the tension of the title between “Fate” and “Freedom.” The protagonists often believe that fate and freedom are opposed forces and that they will achieve freedom only by overcoming their “fate”—by exerting their wills to change their circumstances and thus to become independent.  True freedom, however, as the authors argue, is found by accepting the reality of love and by submitting oneself to that reality. (xxii)  In Meager Fortune, the Jameson brothers own a lumber mill in eastern Canada.  Their fate, prophesied at the beginning of the novel, is to destroy the family legacy through rash behavior, and indeed both men fulfill the prophecy, ruining the lumber mill they inherit and destroying the lives of others around them.  Despite this bleak outcome, which the authors liken to that of a Greek tragedy, the novel also includes important moments of real freedom (submission to the reality of love), exemplified by “the true hero of the novel, Meager Fortune,” an unassuming and humble man who sacrifices himself for others without seeking any credit for it. (p. 6) Both Jameson brothers ultimately abandon their pride, following Meager Fortune’s example, and sacrifice themselves “from a position of humility.” (6)

In Mercy Among the Children, Sydney Henderson makes a pact with God at the age of twelve, promising to practice pacifism if his playmate’s life is spared after Sydney pushes him from a rooftop.  Sydney remains true to the pact throughout his life, incurring repeated harm and humiliation to himself as well as to his wife and children.   In contrast, Sydney’s son Lyle, the novel’s protagonist, seeks to assert his own will against what he sees as the will of the divine.  He refuses to pray for his dying brother’s recovery from an illness and becomes an atheist.  Taking as his model an unscrupulous and powerful neighbor, Leo McVicer, Lyle commits theft and neglects his responsibilities to his family.  At a pivotal moment, Lyle saves his father’s old playmate instead of killing him as he had intended to do, but his actions unexpectedly lead to the death of his brother Percy. (56)   Ultimately, Lyle comes to see his life, not as subverting the will of the divine, but as finding fulfillment when his will accords with that of God.  He learns that his brother’s heart was transplanted into the body of a young woman, and he becomes reconciled to both his brother’s fate and his own.  (61)  He is able to overcome his guilt over his brother’s death and to see that love, not willfulness, is the source of his life’s fulfillment.

In Lost Highways, the protagonist is Alex Chapman, a young man who had aspired to the priesthood, but who rejected his faith and eventually became an artist.  Alex is resentful of the ways he has been abandoned by his parents and prevented from fulfilling his talents or finding happiness with the woman he loves. Hoping to take control over what he sees as his own unfair fate, he steals a lottery ticket from his uncle and becomes complicit in murder. (72)  As in the other novels, minor characters (in this case, for example, the young girl named Amy Patch, and a policeman named Markus Paul, a member of a First Nations community) embody principles of loyalty and self-sacrifice that the central protagonist largely overlooks.  Ultimately, Alex sacrifices his own good in order to prevent the murder of Amy, having come to realize that “love and forgiveness” are far more valuable than the “approval and disapproval” that used to be his guiding principles. (94)

The authors include a briefer discussion of Crimes Against My Brother, a novel that tells the story of three men (Evan, Harold, and Ian) who as boys swear an oath to depend only on one another and to reject the divine. (109)  As in the other novels, the protagonists attempt to will their freedom against their fate.  And as in the other novels, this strategy proves entirely ineffective.  Each of the three friends chooses at some point to betray the others. (115)  In the end, two of the three are able to discover genuine, self-sacrificing love and to rekindle their friendship on a more dependable ground.

In these works, MacDonald and Craig see Richards as tracing a journey through Western thought, from Greek tragedy in Meager Fortune, to Christian stoicism in Mercy, and to secular humanism in Highway and Crimes.  (p. xxi)  The authors demonstrate successfully that Richards’ works repay careful philosophical and theological analysis.  They show that at the root of each of the novels is an Augustinian “redemption” in which “[t]he love of self must be converted in the love of others and the love of God.” (125) A dimension that is missing from the authors’ analysis is that of gender.  In the authors’ retelling of the novels’ plots, it appears that the central protagonists in all four novels are male, and that women serve as foils for the male characters’ spiritual development rather than as central protagonists in their own right. Overall, the authors make a convincing case that Richards’ novels, while they portray a universe in which the protagonists are beset by cruel twists of fate and in which their own willful choices often undo them, ultimately do contain seeds of hope and an underlying belief in the efficacy of love and self-sacrifice.

[1] David Adams Richards of the Miramichi: A Biographical Introduction to His Work, Tony Tremblay (University of Toronto Press, 2010).

Also see Gary Throne’s “Augustine: Memory as Sacrament,” Barry Craig’s “Freedom in the Novels of David Adams Richards,” Sara MacDonald’s review of “Mary Cyr,” Andrew Moore’s “Doctor Faustus: On Power and Human Freedom,” Catherine Craig’s “Of Infinite Variety: The Promise of Comedy in Shakespeare’s Antony and Cleopatra,” and Mary Craig’s “On the Diamond and in the Pews: The Push to Legalize Sunday Baseball.”

Paulette Kidder is an Associate Professor of Philosophy at Seattle University.

Varieties of Chinese Nationalisms and Their Implications on Religions

Calvin and the Foundations of Modern Politics