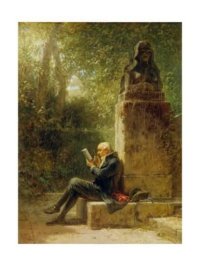 In 1915, the Irish poet W.B. Yeats wrote a scathing poetic attack on the scholars of his day called, fittingly enough, “The Scholars.” Fourteen years later, in 1929, he revised the poem substantially; I quote from and discuss the earlier, and more well-known, version[1]:

Bald heads forgetful of their sins,
Old, learned, respectable bald heads
Edit and annotate the lines
That young men, tossing on their beds,
Rhymed out in love’s despair
To flatter beauty’s ignorant ear.

They’ll cough in the ink to the world’s end;
Wear out the carpet with their shoes
Earning respect; have no strange friend;
If they have sinned nobody knows.
Lord, what would they say
Did their Catullus walk that way?

What is the conceit here? What are the antitheses and oppositions? What are the images? “The Scholars” are old; they are bald. Both of these adjectives mean more than they say, for he is commenting not only on their appearance, but on their appearance as symbolic of a general spiritual decrepitude and obsolescence: They are without passion. They are bloodless in the heart.

The way in which “old” and “bald” bracket the two inner adjectives in the second line, “learned” and “respectable,” helps us to interpret those aright. That is to say, they are not compliments, but are rather, in this poem, negative qualities. They are antiseptic editors and annotators, mere hangers-on of those with souls, the young with whom they are explicitly contrasted. These “young” are full of passion, “tossing on their beds,” “rhym[ing] out” poems in “despair,” in contradistinction to those who only tinker with others’ rhymes while writing none themselves and shuffling softly around on the carpet (not tossing on the bed) in anemic complacency (not despair). Such a lifestyle and perspective on art earns them “respect,” which, one gathers, they take in exchange for actual vitality. As David Ben-Merre has written,[2]

“The ‘scholars’ are sarcastically called ‘learned’ and ‘respectable,’ and they are presented as heads on which nothing can grow—they are ‘learned’ without knowing, ‘respectable’ but not treasured. The speaker is bitter, chastising the scholars not only for their parasitism, but also for forgetting that they themselves had ever been young.”

The poem is capped with a reference to the first-century B.C. Roman poet Catullus, whose Lesbia poems are taken “straight,” as the real reflection of the passion of the poet’s personal life.

The conceit, then, is Romantic one, setting the primary authentic vigor, the searing ardor, of the poet—the Artist with a capital “A”—off against the derivative, trivial, secondary work of the scholar or commentator. But is this Romantic posture correct?

W.H. Auden, a critical but sincere admirer of Yeats (see his remarkable poem, “In Memory of W.B. Yeats”) and one who labored hard to free himself from the shackles of Romantic self-fashioning, did not think so.

In “Making, Knowing and Judging,” originally his inaugural lecture as Professor of Poetry at Oxford in 1956 and later included in his prose collection The Dyer’s Hand (1962), he briefly discusses Yeats’ poem. Auden first takes umbrage with Yeats’ opening insult: “Ignoring the obvious libel—that all dons are bald and respectable [Auden was neither—ed.]—the sentiments are still nonsense.” But he goes on to make a more substantive point about the “nonsense” itself and its pernicious character, viz., without the work of editors and annotators, we would have nothing to read:

“Edit indeed; Thank God they do. If it had not been for scholars working themselves blind copying and collating manuscripts, how many poems would be unavailable, including those of Catullus, and how many others full of lines that made no sense? Nor has the invention of printing made editors unnecessary. Lucky the poet whose collected works are not full of misprints.”

The work of editors and commentators is not only an interesting historical curiosity. Without it, no contemporary poet would be able to write, because he would have no poetic tradition in which and out of which to write. The writing of poetry is often the supreme act of reading (compare T.S. Eliot’s “Tradition and the Individual Talent”[3]). Without the editorial work that makes a literary tradition available to writers, one would only possess and be judged according to whatever happens to be fashionable at a given time—a harrowing prospect indeed, for fashion is often a poor judge of what is really valuable. Auden writes:

“Even a young poet knows or very soon will realize that, but for scholars, he would be at the mercy of the literary taste of a past generation, since, once a book has gone out of print and been forgotten, only the scholar with his unselfish courage to read the unreadable will retrieve the rare prize. How much Donne, even, would he have read, had it not been for Professor Grierson? What would he know of Clare or Barnes or Christopher Smart but for Messrs. Blunden, Grigson, Forcestead and Bond?”

It is not only editors who are necessary; translators are too:

“Nor is editing all that scholars have already done for him. There is that blessed combination of poet and scholar, the translator. How, for example, without the learning and talent of Sir Arthur Waley, could he have discovered, and without the slightest effort on his part, an entirely new world of poetry, that of the Chinese?”

There is a lesson here. Those who style themselves “conservatives,” particularly those who think of conservatism as an intellectual tradition of one kind or another, should be the last to denigrate rigorous and careful scholarship and the first to praise it, to offer it all of the support they can. Though the task of liberating important texts—whether from the dustbin of history, the barricade of a foreign language, or both—goes on behind the scenes and is often thankless, it is indispensable. For without it, there is no tradition at all.

[1] In what follows below, Auden quotes the later version of the poem. This version differs from the earlier one in some important respects, but in none that are material to his criticisms that I examine. [2] Ben-Merre, David “The Brawling of a Sparrow in the Eaves: Vision and Revision in W.B. Yeats.” Journal of Modern Literature Vol. 31, No. 4 (Summer, 2008), pp. 71-85. [3] Auden and Eliot have somewhat different views on “tradition,” a topic I hope to treat in a future essay.

This was originally published with the same title in The Imaginative Conservative on July 19, 2018.

E.J. Hutchinson is Associate Professor of Classics at Hillsdale College, where he also directs the Collegiate Scholars Program. He is the editor and translator of Niels Hemmingsen’s On the Law of Nature: A Demonstrative Methode (CLP Academic, 2018).

Reconciling Plato and Berdyaev via the Phaedrus