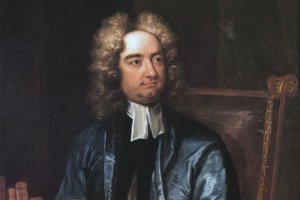 In a letter of Jonathan Swift (1667–1745) addressed to the poet Alexander Pope (1688–1744), dated September 29, 1725, Swift spoke of returning to the grand monde of Dublin to deal with various curates and vicars, and to “correct all corruptions crept in relating to the weights of bread and butter throughout those dominions where I govern.” As Dean of St. Patrick’s Cathedral, he seems to have had some temporal jurisdiction in immediate cathedral areas.

Gulliver’s Travels, at this time, are in galley form. Swift is correcting them. He is not sure whether he can find a printer “brave enough” to “venture his ears” in it—which expression, I presume, means “has courage to print them.” Swift tells us that in his now-famous tale about Lemuel Gulliver, the “chief end I propose to myself in all my labours is to vex the world rather than to divert it . . .” Satirists have serious purpose. One suspects that merely to divert the world does not get at the heart of what Swift had in mind in writing his amusing tales. “To vex” means more to agitate, irritate, or annoy, not to entertain.

Swift then congratulates Pope that he (Pope) has finished “translations.” In a rather affectionate reprimand, Swift recalls that the “Lord Treasurer Oxford often lamented that a rascally world should lay you [Pope] under necessity of mis-employing your genius for so long a time.” The use of the word “rascally” to modify the “world” in this sense is worth comment. The word “rascal” is an English form of a French word for rabble, hence it means mischievous, or dishonest, or mean—something like “fallen world.” One would think that this disordered world was precisely not the one that wanted to encourage Pope to become more productive, lest it have to reconsider the causes of its own rascality.

Foreseeing that Pope is now freer to write as he can, Swift gives him the following admonition:

“When you think of the [I presume “rascally”] world give it one lash the more at my request. I have ever hated all nations, professions, and communities, and all my love is toward individuals; for instance, I hate the tribe of lawyers, but I love Counsellor Such-a-one, and Judge Such-a-one: so with physicians—I will not speak of my own trade—soldiers, English, Scotch, French, and the rest. But principally, I hate and detest that animal called man, although I heartily love John, Peter, Thomas, and so forth.”

Much metaphysics is found in such a passage. Though we can know the truth, we cannot properly “love” an abstraction. The twentieth century, it now seems, was a record of what happens when we try to do so. The objects of our real loves are not abstractions. What is, our very kind, exists in individual persons, in Socrates, Mary, and, yes, in John, Peter, and Thomas. Such a passage almost prefigures Burke, though it more properly recalls Aquinas and Aristotle.

Swift gets even more worked up. “I have got materials towards a treatise, proving the falsity of the definition animal rationale, and to show it would be only rationis capax [capable of reason]. Upon this great foundation of misanthropy…the whole building of my Travels is erected and I will never have peace of mind till all honest men are of my opinion.” It is worthwhile noting that the classical definition of man as animal rationale never doubted that individual men would, probably often, fail to use it properly (rationis capax). The fact is, however, that even when we use it improperly, we are using it; we remain animal rationalis.

Swift next tells Pope that, as he had been in the country, he did not know that his translation of Homer’s Odyssey was out, but he did know of Pope’s garden and building. Swift seems to fall into a reverie, as if he himself is becoming rather ancient (he will live another twenty years). “I have almost done with harridans” (old shrews), the Irish cleric tells Pope, and then adds a phrase, which, in the light of so many current scandals, no modern cleric, Anglican or otherwise, would dare to use, “and soon [I will] become old enough to fall in love with girls of fourteen.” Though Swift’s record here is not totally pious, this is sentiment.

Pope, however, had evidently mentioned to Swift some woman at court whom he (Pope) did not name. Pope described her as “deaf” and “not a pretty woman.” Swift decides to chide Pope a bit on this reticence. He decided, with evident classical overtones, to write a sort of “mythology” to explain who she might be:

“She cannot be Mercy, for Mercy is neither deaf, nor lives at Court. Justice is blind, and perhaps deaf, but neither is she a Court lady. Fortune is both blind and deaf, and a Court lady, but then she is a most damnable party woman, and will never make me easy, as you promise. It must be Riches, which answers all your description. I am glad she visits you, but my voice is so weak, that I doubt she will never hear me.”

Someone had sent Swift an account of his friend, Dr. (John) Arbuthnot’s illness. Swift thinks that he (Swift) has been living “so long out of the world” that he has lost that “hardness of heart contracted by years and general conversation.” He adds, sadly, “I am daily losing friends, and neither seeking nor getting others.” He highly esteems this Arbuthnot—“Oh! If the world had but a dozen Arbuthnots in it, I would burn my Travels.” A high compliment, indeed.

But Swift hopes Arbuthnot will recover in this rascally world. Oh, he has his faults, Swift adds with some amusement:

“There is a passage in Bede [the Venerable Bede’s Ecclesiastical History] highly commending the piety and learning of the Irish in that age, where, after abundance of praises he overthrows them all, by lamenting that, alas! They kept Easter at a wrong time of the year. So our Doctor [Arbuthnot] has every quality and virtue that can make a man amiable or useful; but, alas! he has a sort of slouch in his walk.”

In the end, Swift praises Arbuthnot in a way anyone—even a Catholic!—might envy: “I pray God protect him, for he is an excellent Christian, though not a Catholic, and as fit a man either to live or die as ever I knew.” A man “fit” either to live or to die—that is a marvelous passage.

Swift concludes the letter to Pope. He wonders if he (Pope) is a “country gentleman” whom he must “address out of London.” Swift does not want to waste time in the sending nor fill in the remaining pages in his stationery. Thus he will not “subscribe it”—sign it. How will Pope know from whence it comes? “You will guess it comes from one who esteems and loves you about half as much as you deserve, I mean as much as he can.” There is something touching about that passage.

One cannot finish an essay about Swift, I suppose, without mentioning his famous epitaph—Ubi saeva Indignatio / Ulterius / Cor Lacerare Nequit. This is the Swift who intended to “vex” the cruel world.

Actually, one further comment is found in the letter to Pope, an off-handed comment concerning Lord Bolingbroke. Swift read in a newspaper that the Lord had been hurt in a fall. These are the last words of the letter: “I am glad he has so much youth and vigour left, of which he has not been thrifty, but I wonder he has no more discretion.” Poor man. Swift is acid to the end. But with Swift, it is not so much that, like Christ with the money changers in the temple, he drives them out with a lash. Rather he lashes his own heart. He is beaten by the ills of the world that cause him such indignation. He goes to where a savage indignation no longer is able to lacerate his heart.

A more formal translation of this famous Swift epitaph also exists by W. B. Yeats. It reads: “Swift has sailed into his rest: / Savage indignation there / Cannot lacerate his breast. / Imitate him if you dare / World-besotted traveller; he / Served human liberty.” I suspect that it was not so much “human liberty” that Swift served, but, like all great satirists, our humility. In this “rascally world,” few of us, “world-besotted” though we be, are to be found who, like Lord Bolingbroke, relish being reminded of “discretion” or, even less, like Dr. Arbuthnot, of our “slouching” gait.

This was originally published with the same title in The Imaginative Conservative on June 26, 2015.

The Christian Humanism of Marshall McLuhan

Order and History in Bavaria

The Denial of Being: Ideology as False Metaphysics