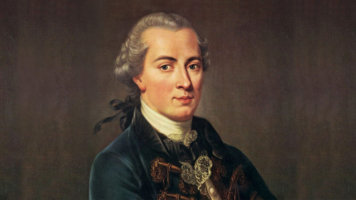 The “Conjectural Beginning of Human History”[1] is Kant’s attempt to recast the creation story of Genesis. The procreative act of Yahweh is cooperative in the sense heaven and earth are combined, as well as the essence of the Divine and humankind. According to Genesis 2:4, creation is the work of generations (toldoth); however, Kant’s creation is presented as a single, direct act; this account varies substantially from the complex series of events presented in the Book of Genesis which also contain a multiplicity of creative acts–and they are all the result of divine intervention. Kant prefers to change the circumstances of the origin of creation, making his essay a revolutionary enterprise. He inserts a “plan” whereby we can only improve out proverbial lot in life through individual efforts. On the other hand, the Biblical narrative allows us to possess most human facilities from the moment we enter the garden. As the result of the Fall, Kant decides to present humankind as moving from a beastlike state to a more civilized condition.

The simple eidos of the account in Genesis takes the form of an ontological understanding of the universe; human existence becomes connected with the symbolization of creation. Kant’s creation narrative is a rejection of this aspect of the Biblical tradition, although as Stanley Rosen suggests, it provides Kant with a propitious opportunity to give his own version of the event.[2] The division Kant has chosen (Genesis 2-6) cannot be separated from a more substantial tradition. Kant has learned a tactic from the greatest manipulator of Genesis, Sir Robert Filmer, who used the initial chapter of Genesis to defend divine right monarchy. In due course, Locke, Sidney and others would refute this exploitation of the text, and deliver their own distortions of various sorts. Filmer and Kant commit the same error. The books Genesis to Joshua (Hexateuch), in their present form, constitute an immense, connected narrative. In either case, wherever one begins, the reader must keep in mind the narrative as a whole, and the contexts into which all the individual parts fit, and from which they are to be understood.

Kant’s enterprise is based upon a denigration of the theophanic event, as it is traditionally understood. To dismiss the most important historical factors that are introduced as “intermediate causes,” Kant argues, is to “originate an historical account from conjectures alone.”[3] The result of such an approach is to present “a mere piece of fiction.”[4] God expresses Himself through His actions and these events are evidenced by the instances where we are told “God knew” of the situation in the garden, although in Kant’s account the garden is the result of a bountiful nature instead of a procreative action of the Divine. The Biblical account of Genesis presents God as always participating in human history and maintaining a desire to improve the lot of humanity, albeit God does not always take an active role in these activities.

The revelatory acts Kant disparages in his “history” are the most prominent examples of the continuation of the Berith that can be found in Genesis and the Hebrew Bible. The precursor to a covenant is renewed and ratified at various intervals throughout the book; the mutual presence of God and humankind in the dialogue Kant has chosen to exegete is expanded into the mutual presence of God and his people.

Kant and many contemporary biblical scholars argue that the structure and presentation of the creation idea are part of a cosmological world responding to the problems it was forced to encounter. Cosmological humans, from this perspective, did not possess the modern tools of explanation and were forced to depend on this vocabulary. The “story” presented in the first two chapters of Genesis is part of a larger canon of explanations of the universe. The Genesis story should be considered along with the Babylonian epic and other Memphite works as accounts that attempt to illuminate the creative act. Unfortunately, Kant and his epigones have failed to appreciate the reality of the event, and he is unsuccessful at reintroducing his version of a symbolic explication.

Kant insinuates his solution to the “inevitable conflict between culture and the human species” when he satires Herder’s most ancient “document” of the human race by referring to it as the ancient “part” of human existence: contentment with Providence.”[5] What then follows comes into being through a process of nature, and the movement can generally be said to be from the natural to the moral. This more highly differentiated “justification of nature”[6] called providence diverges significantly from the Christian idea of providence as the foreknowledge of the Divine used in a way to protect His people on earth. The use of nature also takes on a more regimented meaning, implying it may be teleological in form. Providence must then be understood as the role of Kantian nature in history.[7]

Although Kant is influenced by Rousseau, he rejects Rousseau’s philosophy of history. For Kant, human history is a transition directly related to an “analogy of nature.”[8] He argues that the original state of humankind cannot be denied, but he suggests it is not a state of crudeness because nature “has already taken mighty steps in the skillful use of its powers.”[9] Kant then proceeds to acknowledge the movement from natural instinct alone to a new state of power.

Kant observed that the development of humankind as a moral lot could ameliorate the conflict between culture and species. Humankind for Kant can be considered to be developing towards a healthy end: humans alone are able to move beyond a brutish state of existence to a more humane life. But humanity is faced with at least three different types of dissatisfactions related to this new freedom. Natural maturity precedes civil maturity. While a young person may possess the physical ability to procreate and raise a family, he or she does not usually have the “civil” qualifications for another ten years, according to Kant. This is alleviated as humans develop into ethical beings, but there will be an intermittent period of misery. Kant introduces the limitation of age as prohibiting humankind from achieving our moral potential. This is followed by the problem of human inequality and the imposition of a “civil right” as the solution to the problem.[10] Albeit flawed, Kant can now provide the distinctions that are necessary to make his approach coherent.

The situation becomes even more complicated when the foundation of moral education, culture, is unable to fulfill its role in society. Culture, in a Kantian context, should be understood not as an aesthetic pursuit of the good, the true, and the beautiful, but as overarching basis for the moral improvement of all humans. Culture can provide for human freedom if it can transcend nature. Culture is incapable of changing the original needs of humankind, as its success is limited to the manufactured desires resulting from humankind’s use of reason. At the end of the day, we have some form of civil society, premised upon autonomous decision-making (avoiding the “heteronomy of the will”) that resembles our inordinate faith in reason as the guide to the moral life.

7. There is some reciprocity here as Kant’s notion of history also contains an element of providence.

This was originally published with the same title in The Imaginative Conservative on September 17, 2013.

Lee Cheek is a Board Member of VoegelinView and Dean of the Social Sciences and Professor of Political Science and History at East Georgia State College and a Senior Fellow of Alexander Hamilton Institute. His books include Calhoun and Popular Rule (University of Missouri Press, 2004) and Confronting Modernity (Wesley Studies Society, 2011), among others.

On the Diamond and in the Pews: The Push to Legalize Sunday Baseball

In the Beginning, the Word. In the End, the Image? The Cultural and Political Consequences of the Visual Mentality